Urring on the Side of Caution? 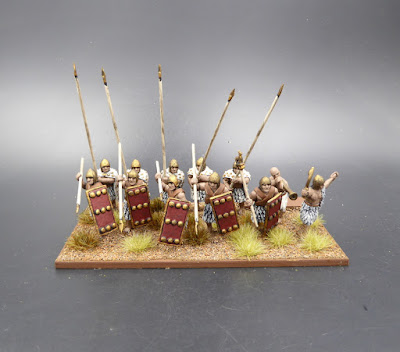 When finally taking the step to embark upon a new project, do you buy only enough figures to field a test-unit or two or do you tend to throw caution to the wind and buy enough figures to field an army (or two?)  Having made my tendencies public via this blog for approaching nine years, my answer ought to be obvious.  Right?  Right.  I tend to make a large purchase and throw it onto The Lead Pile to tackle later.  Sometimes, project tackling comes later.  In this case, a year later. 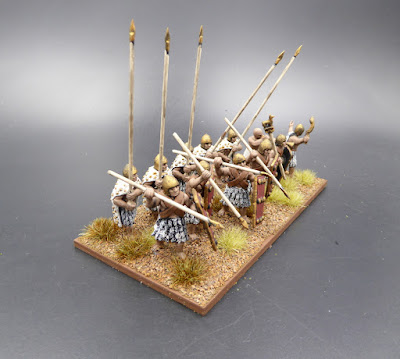 Off the painting desk today is the first stand for a new project.  The first dozen figures form a heavy spear unit.  The stand has shield bearers with javelin in the front rank protecting infantry with long spear in the second rank.  The spearmen in the back rank are outfitted in the fashionable, bossed cloak.  Figures are from the excellent line of Sumerians available from Newline Designs. 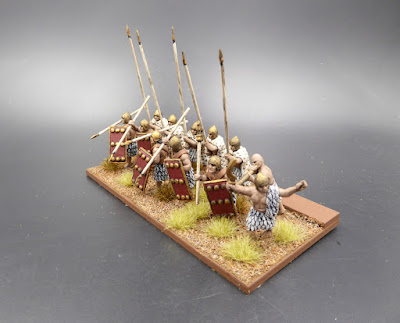 These Newline Designs figures were purchased a year ago during the anniversary sale.  Only now am I turning attention to this project.  A pair of Sumerian armies was on the plan for 2021 but I got sidetracked by an interest in War of the Roses.  Work continues slowly on the WotR project with my fourth battle beginning construction.
Did I purchase enough Sumerians to field two armies?  Yes but likely only enough for a pair of starter armies.  These two armies will tend toward the smallish size for now.  Besides a large tranche of Newline Designs figures, I also ordered a sizable array of Wargames Foundry Sumerians.
With gaming frequency up and painting output down, I do not expect to make quick progress on the Sumerian project soon.  As noted above I have a WotR battle on the workbench along with more 10mm ACW.   Thoughts are returning to expanding the 15mm SYW project.  A barrage of 2021 Summer Sales was too much to resist and more 15mm SYW lead is on its way from a trio of manufacturers.
Posted by Jonathan Freitag at 12:00 AM