With no chance of completing any more figures in August, I'll close out the month a few days early. Production would have been quite low had it not been for the late addition of 96 6mm Romans.


28mm World War II Project:
Ten BTD Germans are finished with a photo of four of the figures below. The BTD Germans are nicely sculpted with good detail and mix of poses and equipment.

28mm Napoleonic Project:
Added one battalion of Portuguese cacadores (6th) to the collection. The battalion comprises twelve formed troops and four skirmishers. The Portuguese are all Front Rank. On the painting table is one battalion of Brigade Games' British line. Up next for the project will be eight British Light Dragoons. 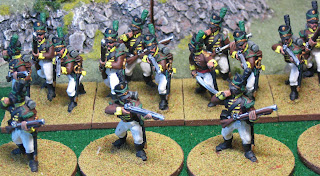 Battle of Zama with CC:A

Nick stopped Saturday evening for dinner, retrieve his daughter and play a couple of games of CCA. We gamed Bagradas twice using 6mm miniatures rather than the blocks. The first game, I played the Romans and then swapped sides for game number two. The Romans were victorious in both games despite my perception that the Romans should be underdogs in this scenario. In my solo plays, Carthage tended to win about 75% of the games so I expected the same tendency in FtF play. Perhaps, my sample size of two FtF games was too small to support my thesis. Anyway, the games were closely contested with the Romans winning 7-5, 7-6.

Next scenario up for solitaire play is Zama. Below is the initial deployment. 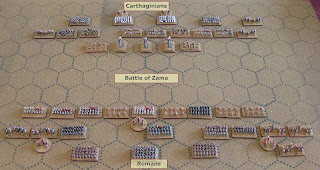 In the first game, Romans won 8-2 with a quick envelopment of the flanks and then the destruction of the elephants in the center. It was over before the Carthaginians got going. The only two banners the Carthaginians managed to gain were the result of one combat where one medium horse and an attached leader were taken. The loss of the Roman horse and leader prompted me to consider the action I took to destroy these two units. 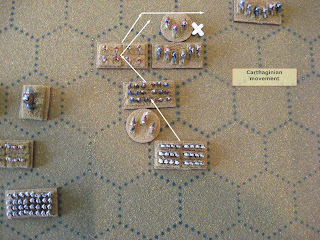 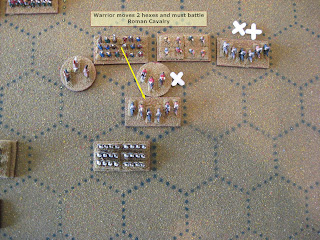 The Carthaginian medium infantry moves adjacent to the Roman horse taking the position vacated by the warband.

With Roman escape blocked, the warband attacks since it must Close Combat having moved two hexes. The Roman horse took one hit and two flags and was forced to retreat. With no retreat, the horse was destroyed. The leader, alone in the hex, was killed on a single roll of 'helmet.'

After making this move, I wondered if this encircling tactic could be justified on the ancient battlefield. Should enemy units project a ZOC that would stop such penetrations or is this attack deserving for those units finding themselves over-extended?
Posted by Jonathan Freitag at 1:49 PM 4 comments:

BTD USA has been receiving a light barrage of orders from me in the last two months. Their frequent, deep-discount sales push me over the edge. The July 4th sale was another opportunity for BTD USA to drawn me into ordering more troops. With nearly 53% discount from retail, I ordered two platoons of WWII Germans and a second dozen Cretan archers. Luckily for me, the WWII figures paint quickly. Another recent purchase includes an order from Renegade. In the package were slingers and Roman cavalry. In an early order, two of the Roman cavalry horses were damaged. With this order, I noted the damage and requested replacements. This order contained four additional horses in excellent condition.

Not much painting has been accomplished thus far in August. Only 16 28mm Portuguese have been completed with nine 28mm WWII Germans on the painting table. Why has painting dropped so much in August? Family commitments have contributed to the slip but I've also been working on transferring Command and Colors: Ancients to the tabletop. I picked up a Woodland Scenics grass map from a local model train shop and spray painted the hex grid over the mat. The initial troop deployments from the scenario, Bagradas, are shown in the photo below. 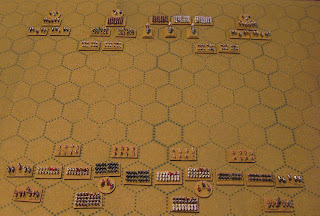 Posted by Jonathan Freitag at 2:04 PM No comments:

BTD USA has been receiving a light barrage of orders from me in the last two months. Their frequent, deep-discount sales push me over the edge. The July 4th sale was another opportunity for BTD USA to drawn me into ordering more troops. With nearly 53% discount from retail, I ordered two platoons of WWII Germans and a second dozen Cretan archers. Luckily for me, the WWII figures paint quickly.

15mm Second War of Italian Independence Project:
Two battalions of Austrian line infantry (Freikorps) and one battalion of French line infantry (WTNW with Old Glory command) were completed by the end of July. My July Mirliton order arrived on the 31st containing more guns and cavalry. The Austrian guns and crew are especially well-done and surpass their Old Glory equivalents. 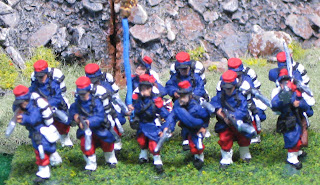 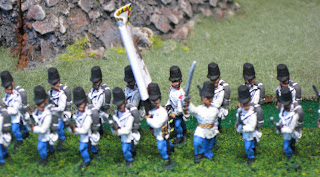 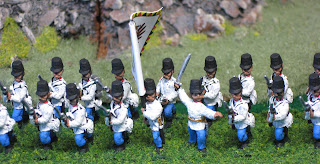 Since cavalry makes up a small proportion of the forces in 1859 OBs, I may switch to Mirliton for all remaining cavalry. What I will do with the Old Glory figures is yet to be decided. Most of the Old Glory cavalry are a bit spindly but some of these defects may be caused by mis-casting. On the painting table are two more French battalions using the WTNW/Old Glory combination and three Mirliton Austrian guns and crew.

Monthly Painting Tally for JUL 2012
Posted by Jonathan Freitag at 2:20 PM No comments: