While I have recently been in a selling-off mode for a couple of months with respect to my boardgames' collection, I used MMPs Black Friday sale to pick up two games. I chose one OCS game (Baltic Gap) and one SCS game (Guadalajara). I had fond experiences with OCS from 15+ years ago and wanted to see a more recent version of the rules and, perhaps, refresh my memory on the mechanics. I sold Hube's Pocket but still have Tunisia, Guderian's Blitzkrieg, and Enemy at the Gates. I was looking for an OCS title that wasn't too big and hope that BG will fit that requirement. MMP has a France 1940 OCS game in Pre-order that interests me, I will wait on that title until it is released. Boardgames downsizing seemed justified since my stacks of games have been languishing on the shelves for many years. That, and my focus has gravitated towards miniatures games almost exclusively.

November is shaping up to yield another productive month covering a wide range of sizes and periods. Details will follow with my month-end painting tally.

6mm CCA Project:
Jake stopped by on the 11th to drop off the remaining 6mm ancients that we bartered about one year ago. Included in the delivery was an assortment of Baccus foot and horse with enough figures for the following:
All of these figures have been based and flocked during the Thanksgiving holiday.

In addition to the above figures (courtesy of Jake), I painted two stands of Celtic/Gallic warbands (18 figs each). Added to the primed inventory box are 4 stands of Carthaginian citizen infantry. Based on discussions with Scott, these will be based as medium infantry; each stand holding 24 figures per base.

30mm ECW Project:
Having only enough Renegade figures to complete two more foote regiments and not having completed any regiments for 2011, I put 27 figures into the painting queue. These figures will muster as the Queen's Regiment of Foote. The flag is from GMB Flags. A picture of the completed regiment is below. 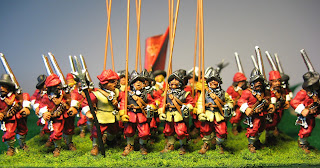 I spent a couple of hours on Friday taking photos of the ECW collection on a unit by unit basis. Now, I have pictorial evidence of each unit in this collection.  My photo session really helped quantify the units present and I may attempt adding the pictures into the Miniatures Painting Log database. Once I resize all of the photos, I plan to post them in the Projects folder.
Posted by Jonathan Freitag at 5:32 PM No comments: