Along with the orphan, colonial Germans noted in an earlier post, also found were the remainder of a half bag of 28mm SAW Spanish sailors. I thought I might as well finish them too and attached are a couple of photos of the Old Glory Spaniards. 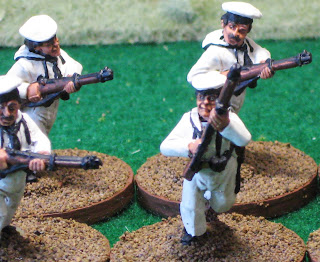 15mm Second War of Italian Independence Project:
One more Sardinian gun and crew has been completed with a handful of units awaiting in the primed box. On a whim, I picked up two packs of French figures from "When The Navy Walked" range. I hadn't seen these before and Northstar Miniatures had them on discount for BP1.20 per 12 figures. They only had two packs in stock but I took them both thinking I could use them as 1859 French line. The figures are a little larger than Old Glory but will look satisfactory in the same unit since Old Glory command figures will be paired with the WTNW figures. Interestingly, the WTNW figures are produced by Eureka miniatures. Hopefully, command figures will be produced at some point.

28mm American War of Independence Project:
Next on the painting table is Hessian Fusilier Regiment von Lossberg (or alt-von Lossberg). The regiment will consist of 24 fusiliers from Perry.
Posted by Jonathan Freitag at 5:32 PM No comments:


28mm Ancients (2nd Punic War):
Twelve BTD Cretan archers are finished and shown below. BTD USA's July 4 sale ends today where they are offering 17.76% additional discount on all figures. I may pick up a few more figures before the sale ends. 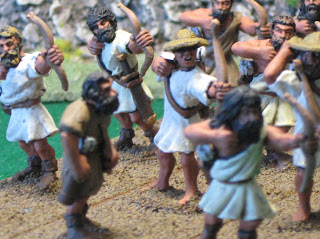 6mm Ancients (2nd Punic War):
Three stands of Baccus heavy infantry (96 figures) have been added to the project. Still searching for a suitable ground covering from which to build the CCA game board.

28mm World War II Project:
Another dozen BTD British figures are finished including a sniper and mortar team. These Brits paint up so quickly that it is easy to churn out a dozen figures in no time at all. 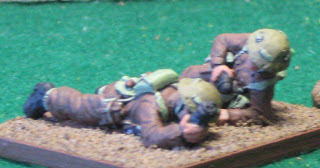 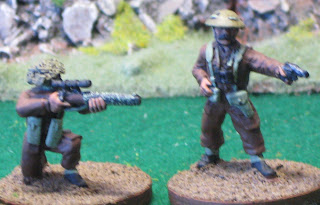 Posted by Jonathan Freitag at 8:34 PM No comments:

Posted by Jonathan Freitag at 8:31 PM No comments:

Painting totals for June showed good productivity despite a few personal setbacks. June output centered on the 1859 project, ancients in two scales, and few random units to break up the painting.

Posted by Jonathan Freitag at 8:22 PM No comments: