More Muslims from BTD's Warriors of Islam range muster out from the painting desk.  This time, one Impetvs-sized unit of crossbowmen.  As mentioned before, a really handsome looking line of figures.  Note for this stand, I provided protection to the slow-loading, vulnerable to cavalry, crossbowmen in the form of two, flanking spearmen. 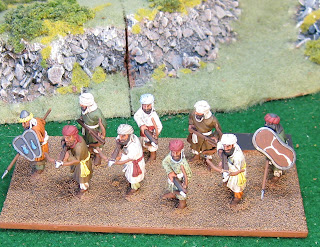 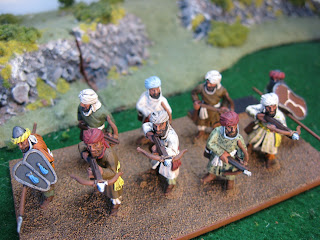 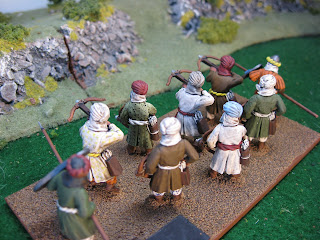 A second unit of spear men is ready for the gaming table.  This brings the project up to  a total of three heavy foot.  As the others before it, all figures are BTD. 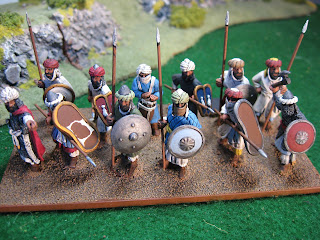 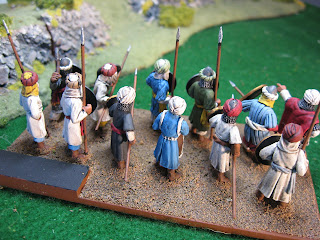 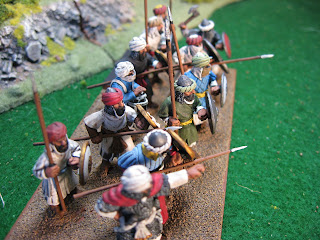 An order was placed with Gripping Beast this week to sample their El Cid range in order to see how they compare with the BTD figures.  On the website, the figures look beautiful.  I hope that they compare favorably size-wise to the BTD figures.  Very tempted by the Artizan figures too.  Also placed an order with BTD USA to bring in additional command sets for my foot.

With Reconquista Impetvs Army lists favoring Islamic cavalry, I need to get cracking on fielding a few units of horse.  Perhaps, I can begin a couple of horse units this weekend?  Most Muslim lists show minima of 4-6 cavalry so cavalry will be a prominent feature of my army regardless of army fielded.

For his contingent, Jake has chosen to build towards an Aragonese army.  The Aragonese army can be fielded throughout the period from 1050 - 1350 so my choices for opponents are many.  Also in my favor is that many lists contain a fair amount of overlap so a list tweak will allow fielding a different opponent easily.

Since Early Nasrid (Granadine: 1232-1340) list contains horse archers, camels, and crossbowmen with no requirement for heavy foot to have supporting archers, this may be the list I target initially.  I have horse archers and crossbowmen to paint as well as Feudal Spanish to use as mercenary, heavy foot.  I do need to order camel troops.
Posted by Jonathan Freitag at 7:39 PM 4 comments:

Off from the painting desk this weekend are two Impetvs skirmisher units, each of four figures.  Again, the figures are from BTD and are very nicely sculpted.  With the exception of a few clumps of flash on the base bottom, flash is non-existent.  In fact, none of the foot figures in BTD's Warriors of Islam range have had any noticeable flash.  Perhaps, a few minor mold lines but nothing else.

In Impetvs, many of the Reconquista Army Lists provide the option of fielding archers and crossbowmen either as a missile ("T") element or as a skirmisher ("S") unit.  Having no experience with the game yet, I opted to field these archers as two skirmish-sized elements.  Note the cleat that is painted black on the left trailing edge of each stand.  My plan is to use this raised area as a place to affix unit statistics for game play.  That way, unit statistics will be readily available at a glance.  We'll see how this works in practice. 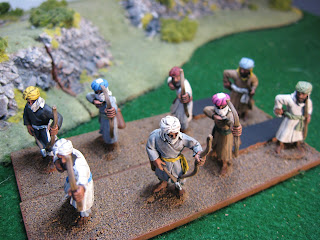 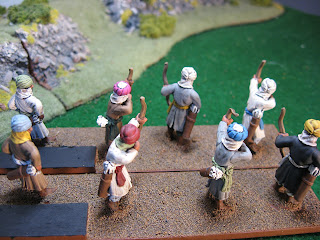 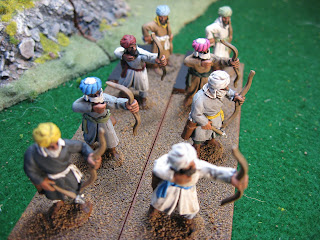 The second Impetvs unit is off the painting desk.  This time, one 12 figure block of spear men.  All of the figures are BTD. 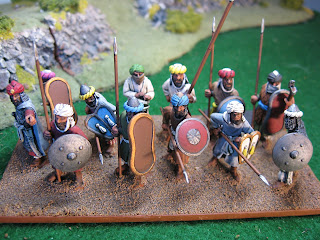 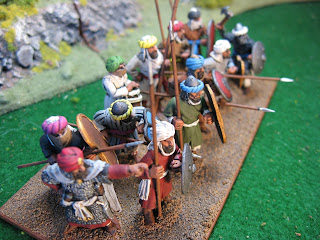 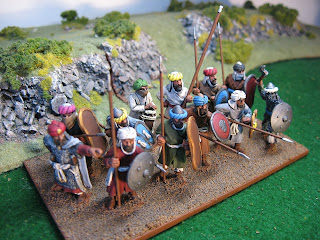 More units are in the painting queue as I try to play catch-up in the burgeoning arms race with Jake (Jake's latest efforts).  Shifting through the lead pile to plan and organize future builds, I find a shortfall of command sets.  Only enough command remains to field three FP (heavy foot) units.  Sufficient troops are available to field three or four additional heavy foot units but no command.  I guess I will wait for the next sale.  I must have miscalculated my needs with my last order.  Am I the only one to put an order together and later discover that the order placed was in error?  Seems I frequently get the mix incorrect with either shortages or surpluses.

Following the foot spear unit shown above, next off the painting table in the following order will be:


The Warriors of Islam line from BTD is really quite excellent and a pleasure to paint.  When obtained from one of their frequent sales, the figures are comparatively inexpensive at about $1.10 each.

Extra Impetvs Volume 5 arrived from On Military Matters this week and contained within are Army lists for the Reconquista.  The Reconquista lists include:
Quite a variety of armies to field.
Posted by Jonathan Freitag at 5:12 PM 15 comments:

While two of the gaming group head down to Moscow for a day of Fire and Fury action with the Battle of Gettysburg, I remain in Spokane attending to various tasks.

A second Impetvs unit of BTD Spanish marched off the painting table.  Like the previous BTD Spanish unit, the crescent shield that came with the figure was replaced with an Aventine round shield.  The Spanish Scutarii will be fielded as an Impetvs FL. 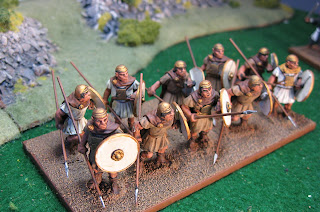 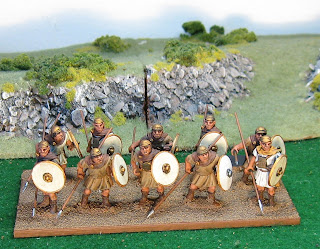 This unit was in my painting queue before Jake quickly produced a number of feudal Christians for the Reconquista.  His rapid deployment forced my hand and the next few units off my painting table will be for the Reconquista project.  On the workbench are two Muslim foot: one with javelins and the other with bows.

I am also getting an itch to add a unit or two to the 28mm Napoleonic Project as well as a unit of British foot for the 28mm AWI Project.  Enough figures for two regiments of Foundry foot are in inventory.  Having not painted any Foundry figures in many years, I look forward to getting this onto the workbench.

One of the benefits of having so many periods to work on, period stagnation is rarely a problem.
Posted by Jonathan Freitag at 11:14 AM 8 comments:

Jake and I have been been discussing the prospects of a joint project for a few months.  Initially, the discussions focused on a small, SAGA-sized force.  A little arm twisting resulted in scope creep with thoughts of an Impetvs-sized force.

Jake already jumped in and churned out several units for the Christian states while I plan to field combatants from the Muslim states.  Some of Jake's completed Christian forces can be seen at the links below:

My first Impetvs-sized unit off the painting table is one unit of twelve swordsmen from BTD's Warriors of Islam range. 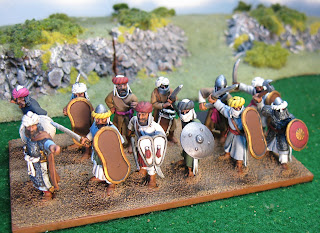 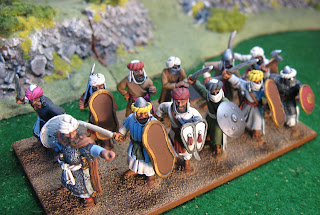 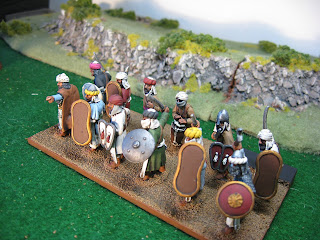 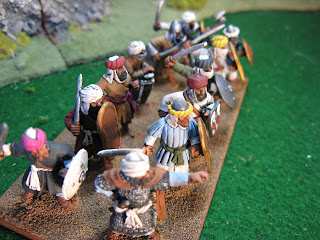 With an array of equipment and costume, my first impression is that an Andalus army will be a very colorful and varied force on the gaming table.  Currently on the painting table are twelve spear armed warriors.  For variety, Artizan and Gripping Beast may also make appearances within the ranks once the core Andalus army of BTD figures nears completion.  That point may be a long way off since the BTD stockpile is quite large.
Posted by Jonathan Freitag at 8:34 AM 6 comments:

Well, the painting log book has been closed on the first half of 2013.  Time to assess and reassess my progress YTD.  The pace of painting seemed a bit more leisurely in the first half but my memory of events may be hazy.  I'll let the data speak for itself.

When the numbers were tallied, I ended having painted 640 figures with an Analog Hobbies' scale-adjusted (or size-adjusted for those purists) figure count of 2,222 points.

Thus far, the largest single percentage of completed figures occurred in the 28mm AWI project.  That result is not surprising since I made an early year push to field figures for our first AWI game.  By scale, 28mm topped the categories although I should consider combining 15mm and 18mm.  Not too sure why I deem it important to distinguish between the two but, for now, I do.  25mm could, likewise, be rolled into 28mm. 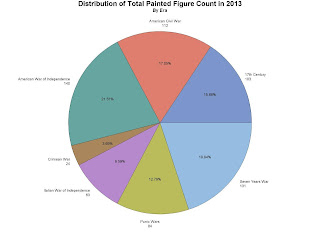 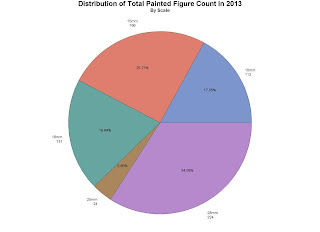 When adjusted for figure size, the 28mm AWI Project again takes top honors at 31.5% with the 28mm Punic Wars project coming in at second with about 19%.  By scale, 28mm consumes over 50% of YTD output. 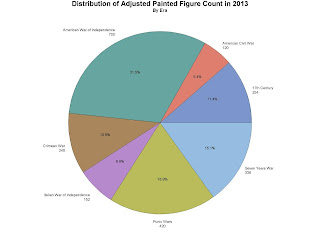 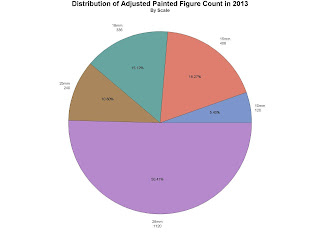 I managed to get an initial game under my belt when I refought the Battle of San Martino.  Commanders have been added as have a few more guns.  A pile of limbers remain in the queue.  Why is it I procrastinate with limbers?

Samurai Battles (15mm) - On Track
My goal was having 12 units and I now have 12 units.  I succeeded in getting my figures on the game table for their first Samurai Battles game. I plan to add at least one more brigade-sized force (six units) to the collection.

Napoleonics in the Peninsula (28mm)  - Off Track
No new Napoleonics have crossed the paint desk.  Would really like to field a couple of British gun limbers and teams.  Perhaps, I can get back on track in the second half of the year?

Seven Years War (18mm) - On Track
Goal is to hold a first game with these figures. No game yet but...
foot, horse, and guns have all been added to the collection for both Austria and Prussia.  Still need to muster jaegers and grenz for the light contingents for each combatant.  One goal for 2013 was to pull all of the figures from their boxes and photograph the entire collection. With Maurice arriving recently, a first game using Maurice is not unthinkable.  I say expectations are being met with respect to progress but I should photograph the collection.

American Civil War (10mm) - On Track
My goal included fielding more hardware in the form of guns, limbers, and wagons.  I added six guns, six limbers, two wagons, and a few infantry regiments.  I have more guns and limbers to field.  Work slowly progresses on a Battle of Port Republic scenario.

1799 Bonaparte in Italy/Switzerland (18mm)  - Off Track
No progress on this project.

Ancients (28mm) - On Track+
On the ancients project, I am way ahead of planned activities.  I only committed to 24 Spanish but have completed 84 figures with more to come.

So far in 2013, I have maintained a respectable focus on my painting goals and meeting most of them.  The 1799 project will likely be pushed back as a new project comes to the front in the second half of the year.
Posted by Jonathan Freitag at 8:35 PM 6 comments:

The last of the Aventine figures rolled off the painting table before the end of the second quarter and will be counted in my 2013 first half recap.  Actually, a few Aventine officers remain to be added to some planned Carthaginian units.  As their Aventine brethren before them (Triarii), these figures are based per Impetvs with fourteen figures on one 120mm x 60mm base. 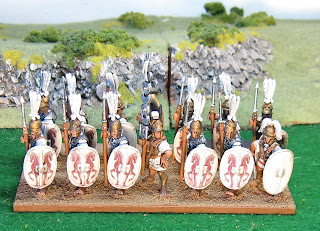 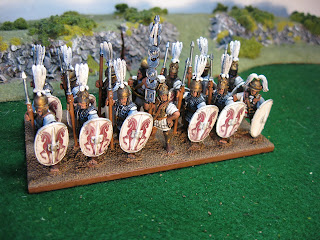 The Aventine figures are really sculpting gems and given the recent price hike at Renegade, are now quite competitively priced.  That is, the total cost for 24 figures purchased in either the Unit Deal (Aventine) or Regiment (Renegade) stands at:

Price alone should no longer pose a significant factor in choice.  While I like the Renegade figures, Aventine sculpting seems more subtle and well-proportioned but lacks the wide assortment of Carthaginian contingents.
Posted by Jonathan Freitag at 2:08 PM 7 comments: