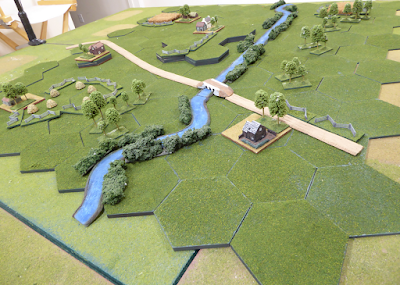 My planned AWI Battle of Shoemaker's Bridge for today's remote game was bumped in favor of a review test of the recently released rules, ¡Arriba España! containing the Portable Spanish Civil War Wargame by Bob Cordery.  My game will be back on the slate for next week's remote session.

In anticipation of my return to the hosting role, I offer up the scenario specifics for the Battle of Shoemaker's Bridge.  This action looks at the fighting on the American left as one of the British columns approaches in an effort to outflank the Americans deployed in front of Brooklyn.

Battle of Long Island: Action at Shoemaker’s Bridge, August 27, 1776
The Map:
The map shows the route of the flanking march as the British approach Brooklyn from the east thereby bypassing the passes through the Brooklyn Heights. The road passes over the stream at Shoemaker’s Bridge. The passage over the bridge is controlled by the high ground around Shoemaker’s Farm and the farm on the knoll to the east along the road.Background:
The American Army, under the command of Greene, has fortified Brooklyn and is prepared for the threat of assault from the converging British under Howe. The plan is to remain behind the protection of the fortifications and stand their ground. After becoming ill, Greene is replaced by Sullivan. Confident of the defendability of the passes through the Guan Heights, Sullivan orders many of his troops to redeploy to hold the passes. With Grant attacking at Red Lion Inn on the American right and von Heister attacking the passes at Flatbush Pass, the Americans will be pinned in their forward positions. Cornwallis will conduct a flanking march on the American left and attack to turn the American left. Once defeated, Brooklyn can be captured.

While Grant and von Heister launch their attacks, Cornwallis’ main body is stopped by American forces deployed on the high ground beyond the stream at Shoemaker’s Bridge. The British main body is commanded by LtG Lord Percy. His objective is to brush aside these annoying Rebels in order to continue his flank march on the American positions situated upon the Guan Heights in front of Brooklyn.

American:
Strategic Victory: No British units present on east side of stream.

British:
Strategic Victory: No American units remain on table and at least three British units exited east side of table.

Total points for each. Larger point total wins a tactical victory.
In addition to the remote game next Tuesday, plans are brewing to host a two-player remote encounter in order to play the scenario more than once.
Posted by Jonathan Freitag at 4:35 PM

Email ThisBlogThis!Share to TwitterShare to FacebookShare to Pinterest
Labels: 15mm AWI, Fields of Honor, Gaming on a Grid, Scenarios