After completing a set of four British 3 inch mortars and team, I figured the Germans ought to receive a similar reinforcement.  With that, four German 81mm mortars with teams exited the painting desk.  Figures are Peter Pig. 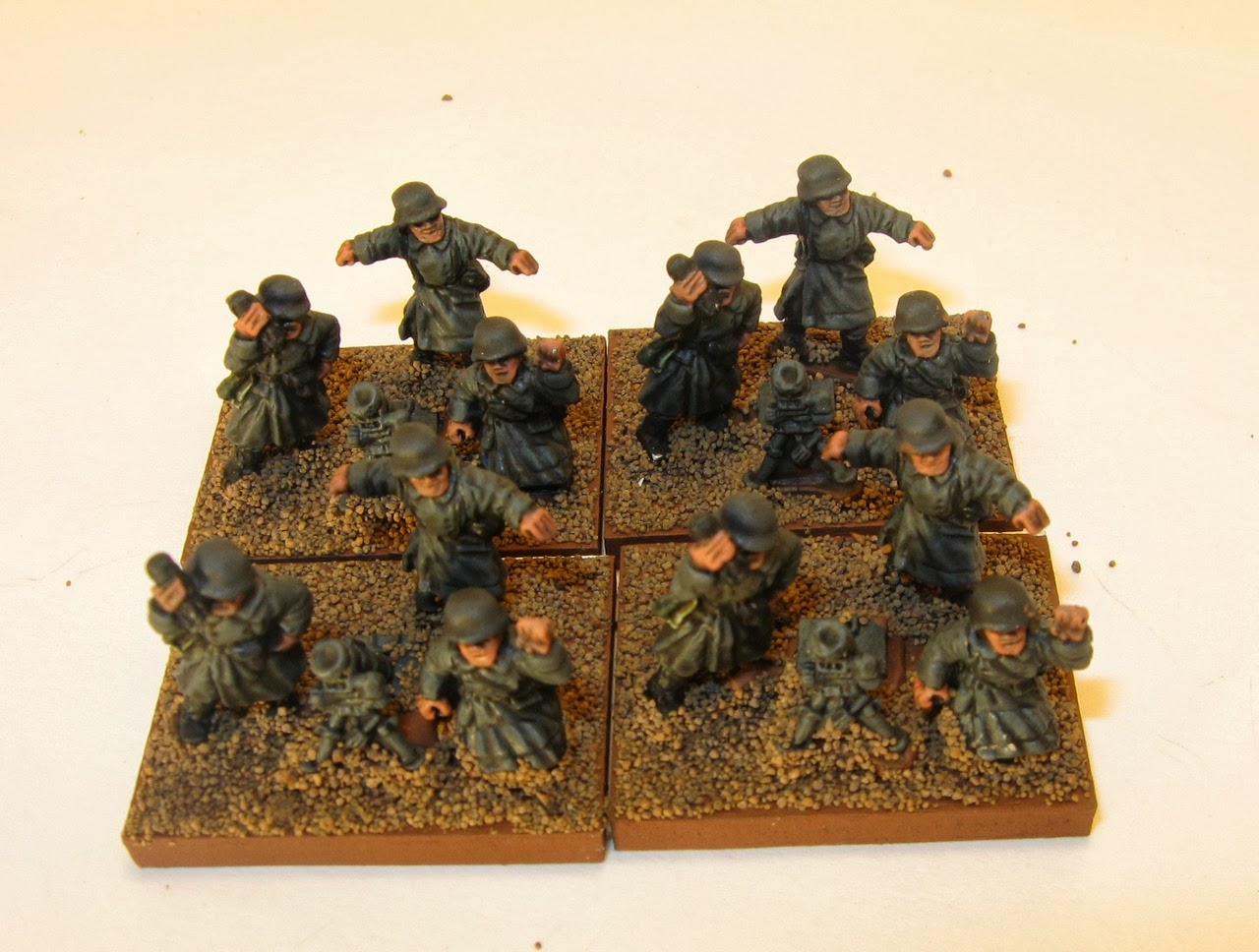 Sticking to the Narvik project, two British 2 pounders followed the Germans off the painting table.  When I purchased these models years ago from Peter Pig, I neglected to add additional crew to the order.  Thus, these two guns have only one crew at present.  Perhaps with my next order, I will add British artillery crew and then retrofit these guns properly. 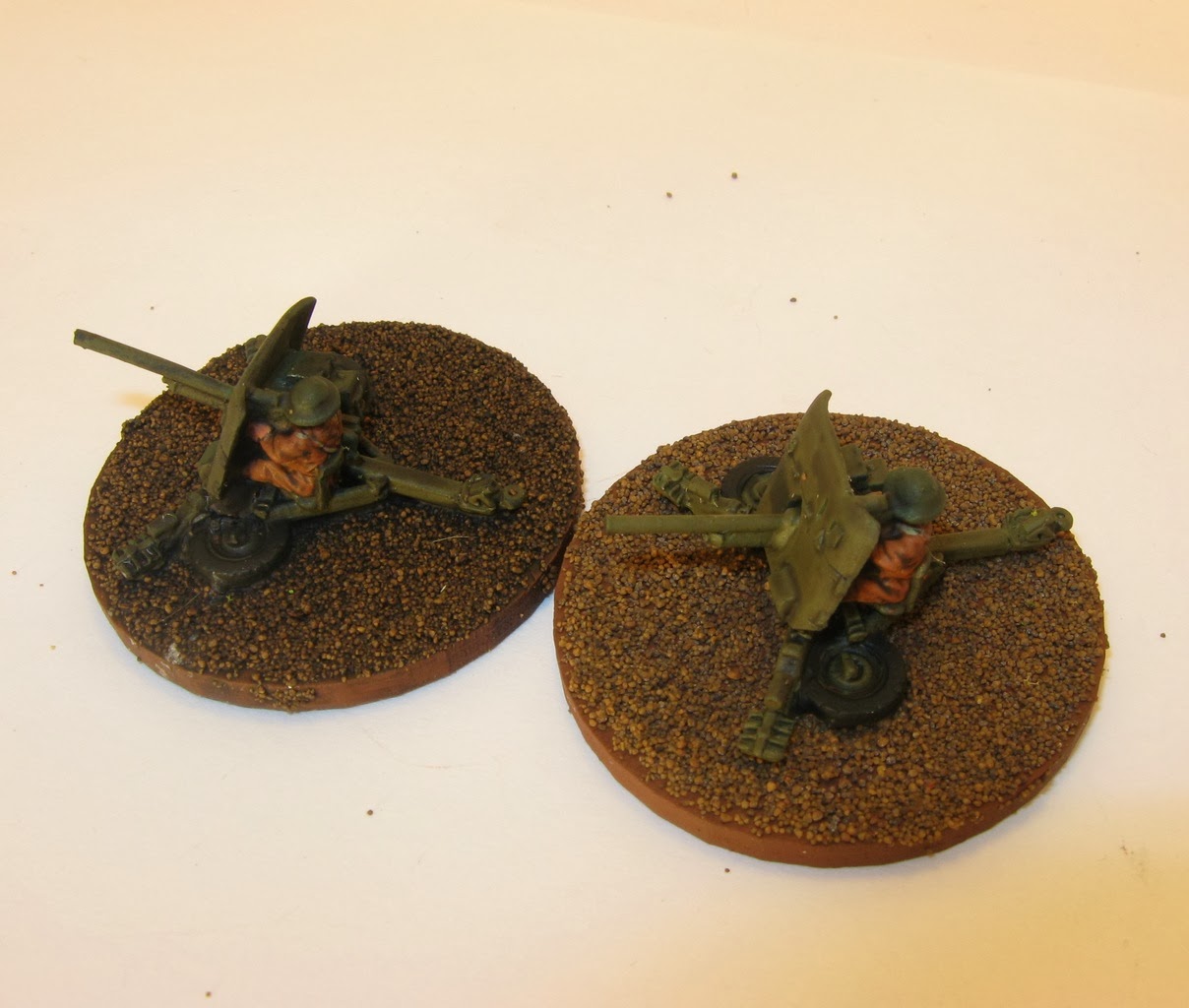 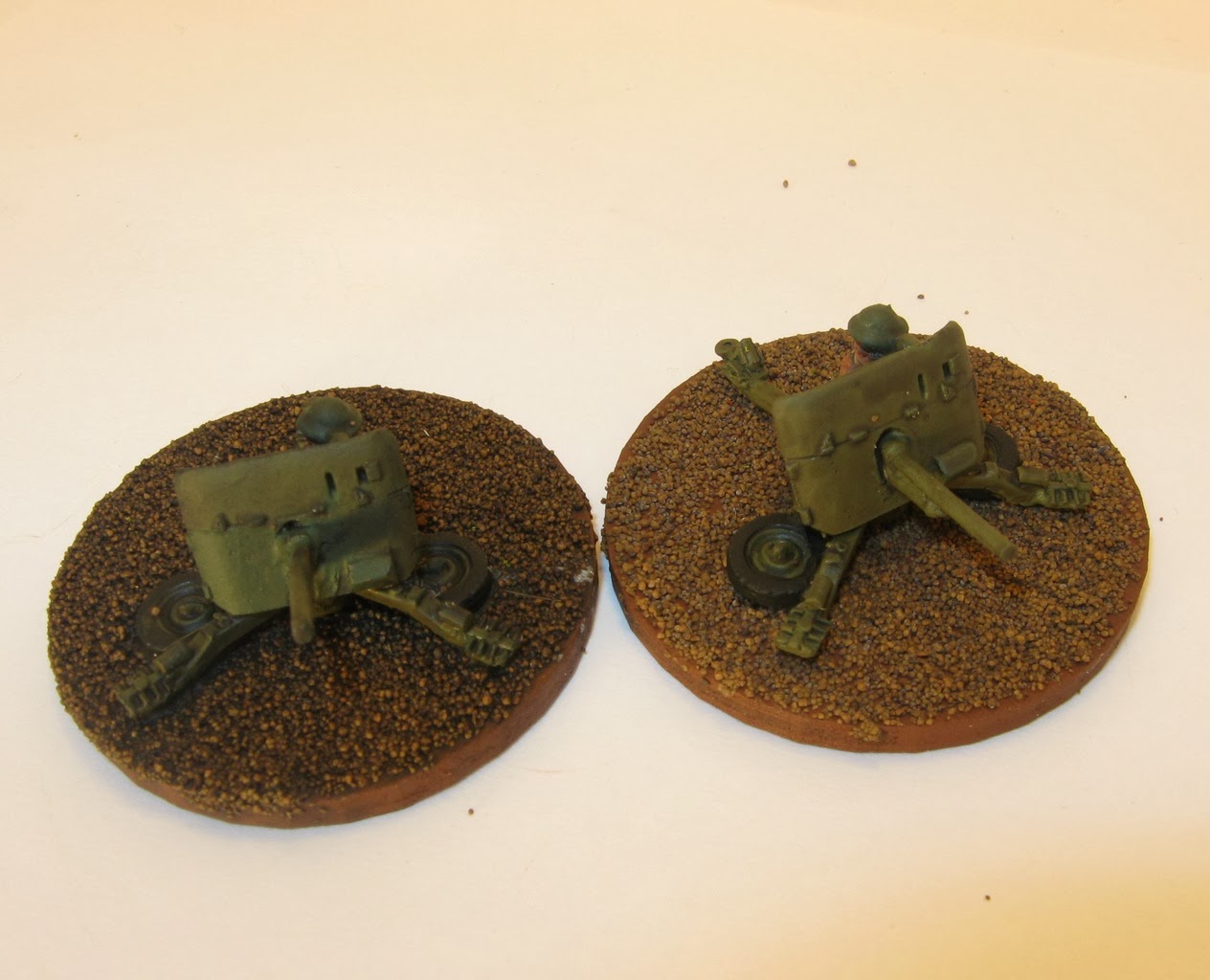 Notice the gun on the left is a little darker in complexion than the other?  Well, the gun on the left had a mishap with the dip during the staining step.  As I repositioned the based model around in my hand as I brushed on the stain, the model slipped from my hand and fell directly into the tin of vanish.  Rats!  I spent several minutes trying to fish the model out of the thick, black goo.  After some cleanup, I don't believe it looks much worse for the extra coating.

Not wanting to move on from the Narvik project just yet, a company of British infantry is in work.  This company comprises 26 figures including one LMG team and one light mortar team.  Each weapon unit has two stands: one showing deployed status and one for movement.
Posted by Jonathan Freitag at 12:33 PM 14 comments:

The more I play the Command & Colors derivatives, the more I enjoy gaming on the hex mat with miniatures.  With hexes, or any grid that governs game play, both precision and speed of play increases.  No more fiddling around with exact movement distances, hair-splitting angles of attack, or other such minutiae.

While Samurai Battles is an excellent two player contest, my thought is that solo play might suffer due to the interaction of both the Honor and Fortune and Dragon decks.  Really nothing beats the wild swings in Samurai Battles' games but for solo play the system poses a few hurdles.  Impetvs games have, likewise, been enjoyable.  A solution for solo play might include translating Impetvs to the hex mat.  Sound reasonable?

In the 15mm Impetvs game, 1U equals 1cm.  Since my small, Commands & Colors hex mat has two inch hexes then the conversion becomes,
1 hex = 2 inches = 5 cm = 5U
In keeping to the spirit of Impetvs movement and ranges, I set movement allowances to one hex for foot and two hexes for horse.  Similarly, firing ranges become one hex, three hexes, and six hexes.  In 15mm, movement allowances seem a bit stingy but I will keep the movement rates as is for now.

To test this conversion, I deployed two seven stand armies with nearly equivalent capabilities.  I drew both armies (one "Red" and one "White") up on the field of battle into a compact battle line with a large neutral area between and no terrain to interfere.  On to the replay...
Turn 1: Initiative RED
Turn 2: Initiative RED
Turn 3: Initiative RED
Turn 4: Initiative WHITE
Turn 5: Initiative RED
Turn 6: Initiative RED
With two foot units destroyed on Turn 6, split command, and the center wide open for exploitation, White chooses to disengage.  Thus, the battle ends with Red controlling the battlefield.  Now, Impetvs games usually end with VBU damage greater than one-half of the starting army value.  With the result clear, I decided to halt this exercise.

Impetvs played on the grid was not much different from normal play.  The game did play faster and much less time spent maneuvering and measuring.  Although the level of excitement was not as high as in Samurai Battles, the game was enjoyable even in a solitaire setting.  As mentioned earlier, movement rates may need to be increased above normal Impetvs rates to allow for a more dynamic game.  In any case, further tests will determine if I prefer grid to no grid.  For solo play, using the grid enhanced my enjoyment but as they say, "your mileage may vary."
Posted by Jonathan Freitag at 12:26 PM 24 comments:

A second Impetvs stand of Spanish Scutarii march off the painting desk.  Like their comrades before, figures are Renegade Miniatures.  In Impetvs, Scutarii can be fielded in either faction giving them a chance to play both sides of the fence and appear in many games.  With the varied and colorful shields, these troops will provide color into whichever battle line they are deployed. 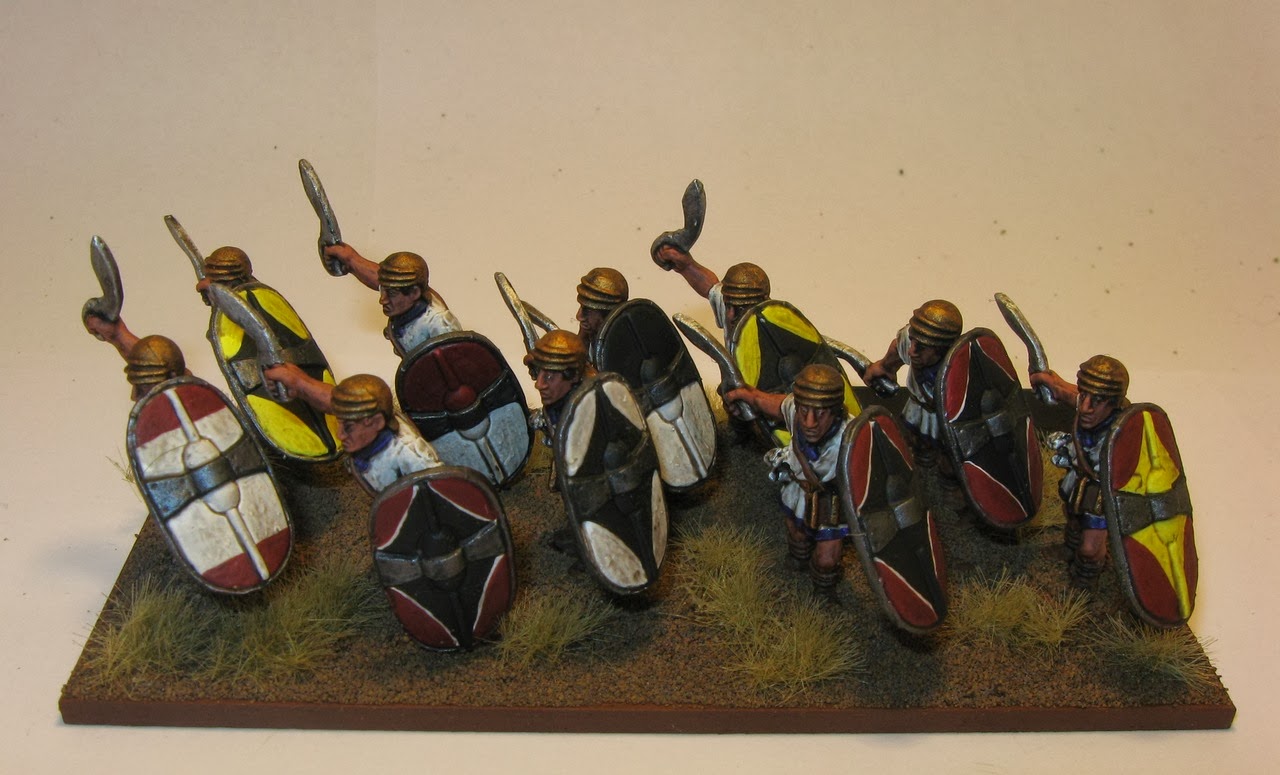 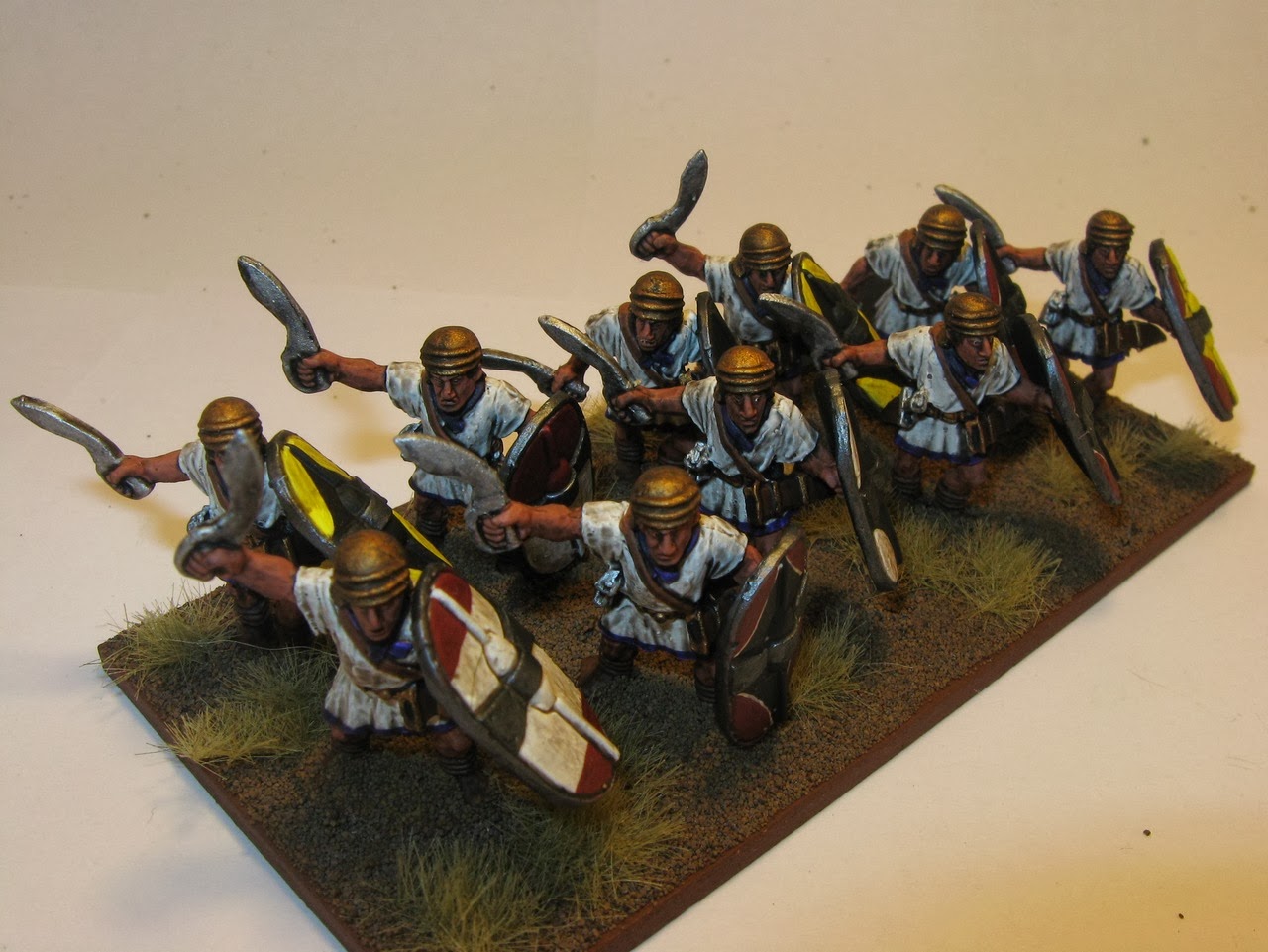 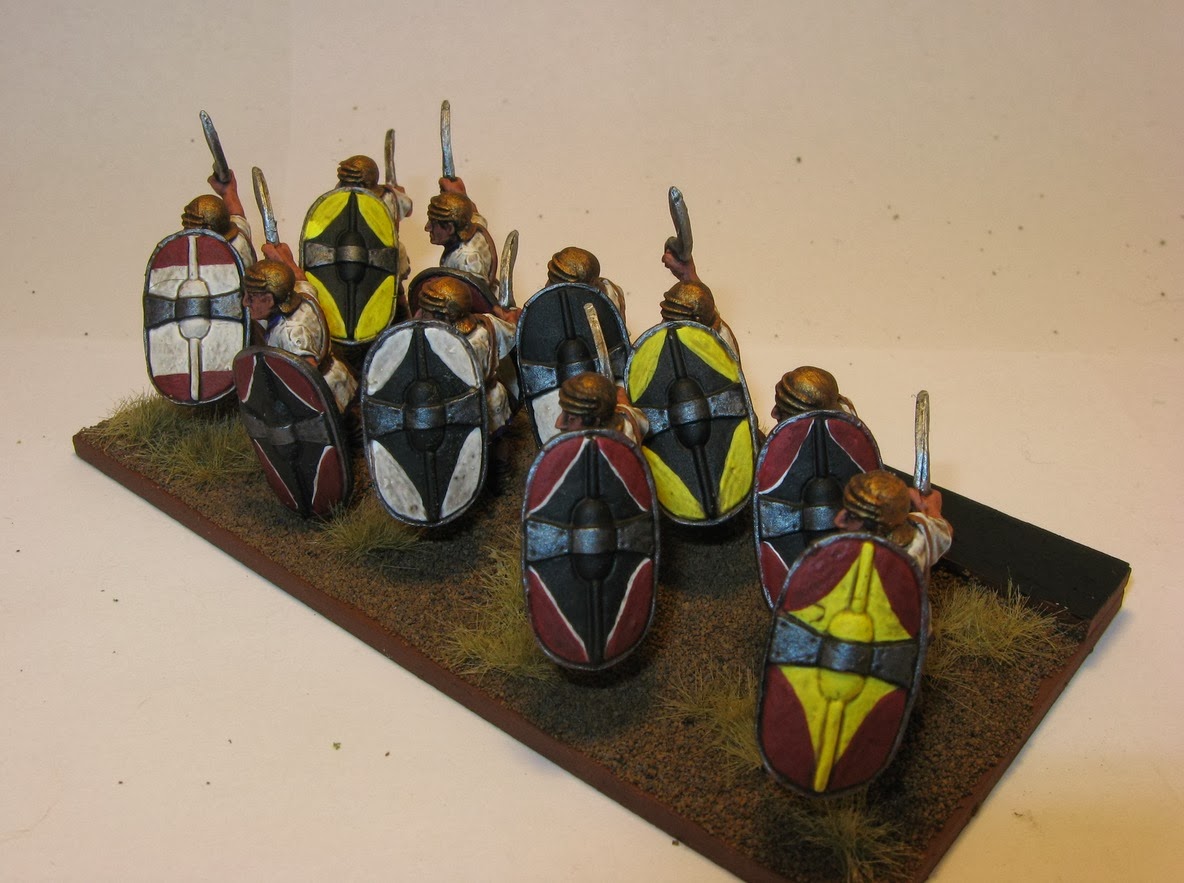 Posted by Jonathan Freitag at 5:20 AM 17 comments:

While I await arrival of a Reconquista resupply from BTD containing handfuls of cavalry, I pushed two more units out from the painting desk.  I may be waiting awhile for the BTD delivery since BTD typically gets inundated with orders during their 50% discount offerings.  No matter; I have other items to paint.

First up is a command stand composed two of mounted figures left over from two, unrelated packs.  The Berber light cavalry figure is from Gripping Beast while the other is from Artizan Designs.  This command stand will be fielded as an attached leader in Impetvs games. 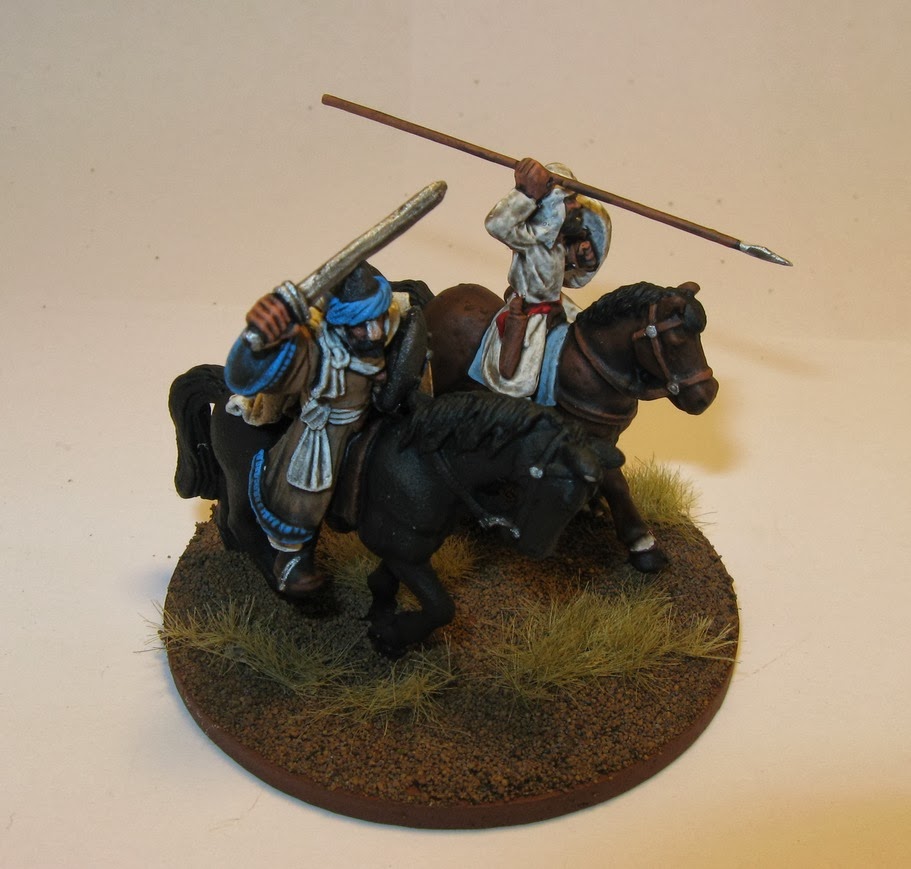 The second unit is a 12 figure stand of Crusader Spanish heavy infantry in mail from the El Cid range.  Great sculpts with much character.  As a bonus, Crusader figures fit well with my hordes of Black Tree Design Moors. 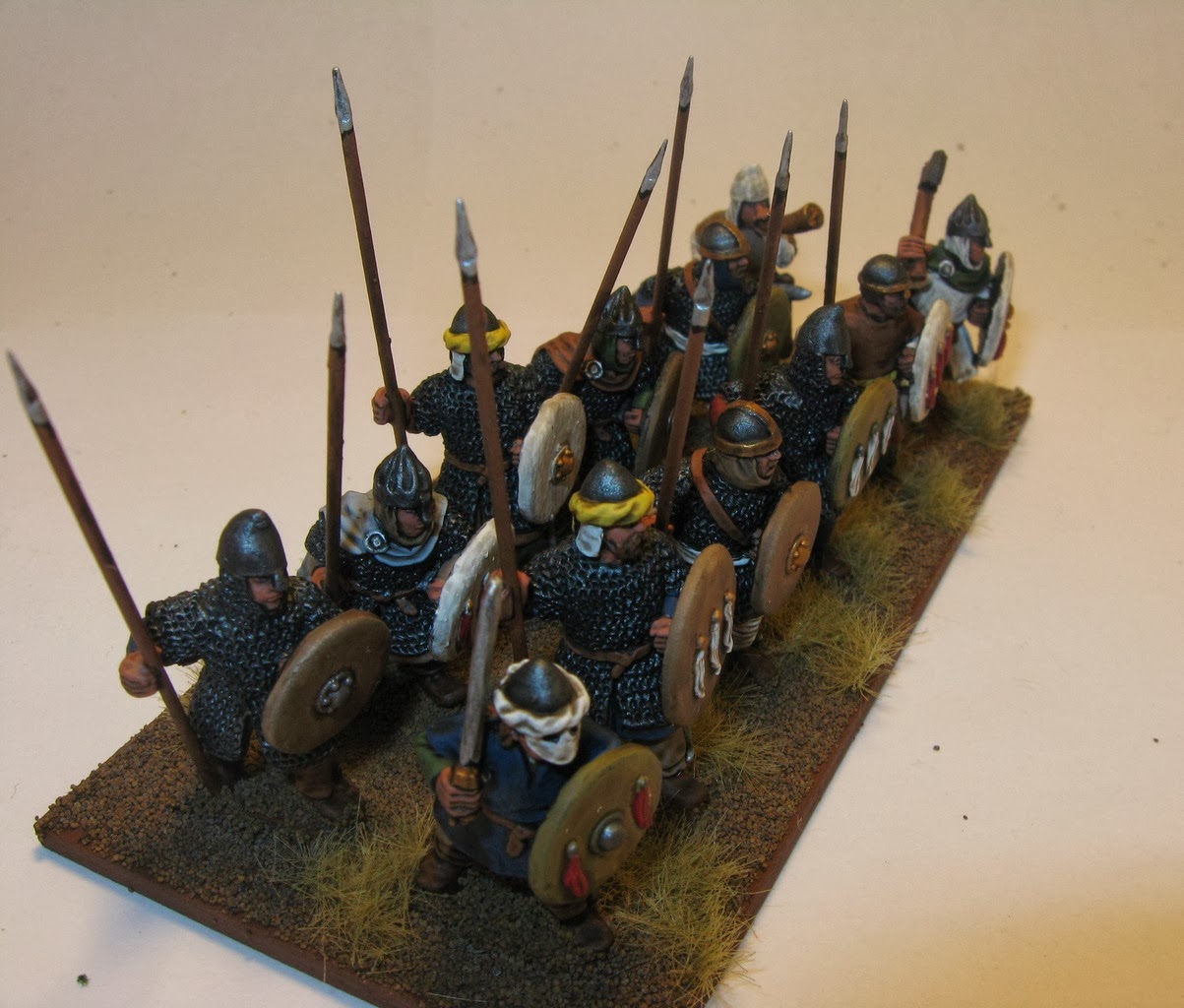 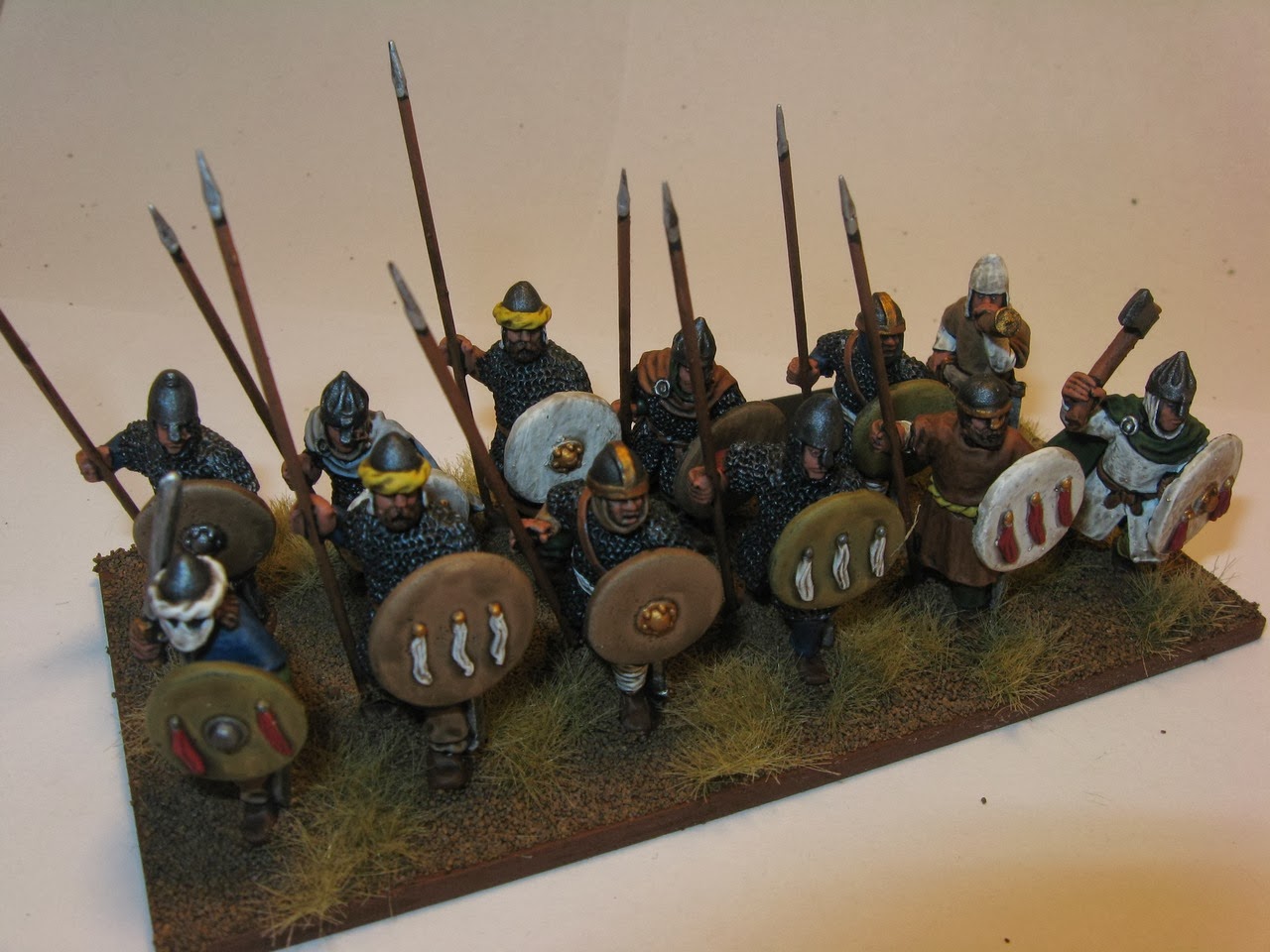 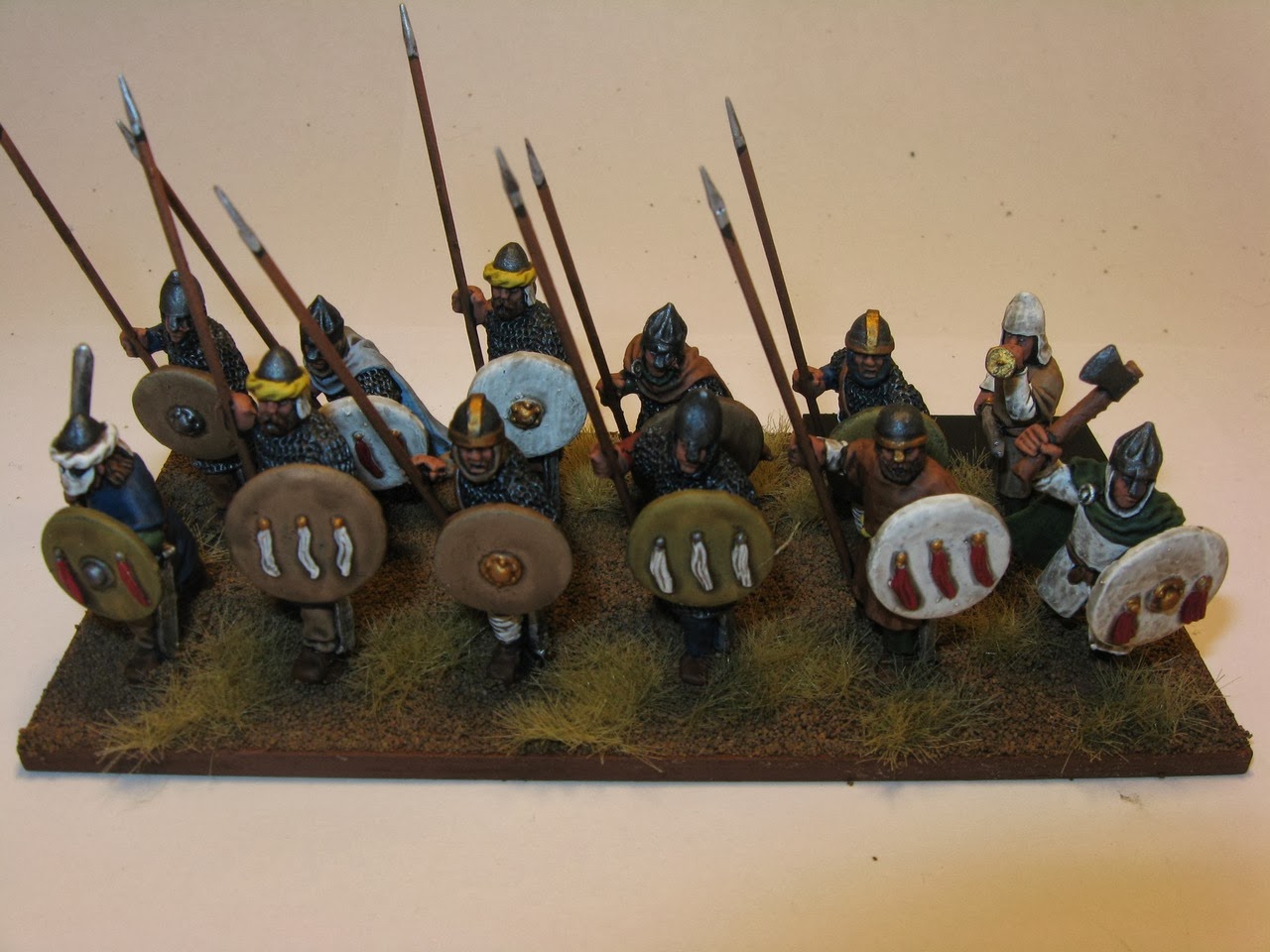 After a week away for work, activity returns to the painting desk.  A number of projects are currently on the painting table including WWII in 15mm, Risorgimento in 15mm, Punic Wars in 28mm, Reconquista in 28mm, plus a few other bits and pieces.

First to muster from the work table is one, 10 figure Imptevs stand of Spanish Scutarii.  All figures are from Renegade Miniatures.  This Impetvs stand will deploy as an FL unit.  Another group of ten such Scutarii awaits in the wings. 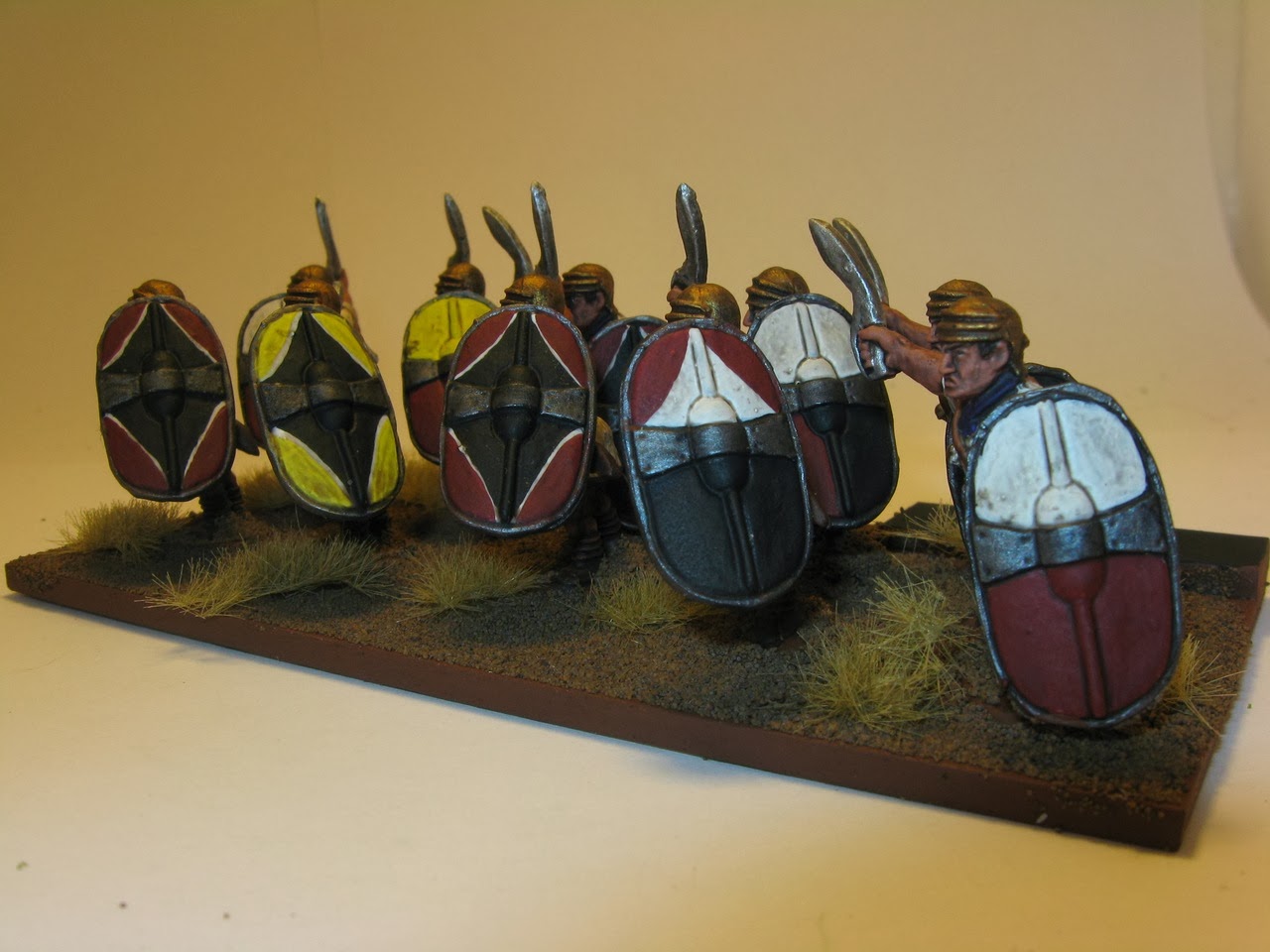 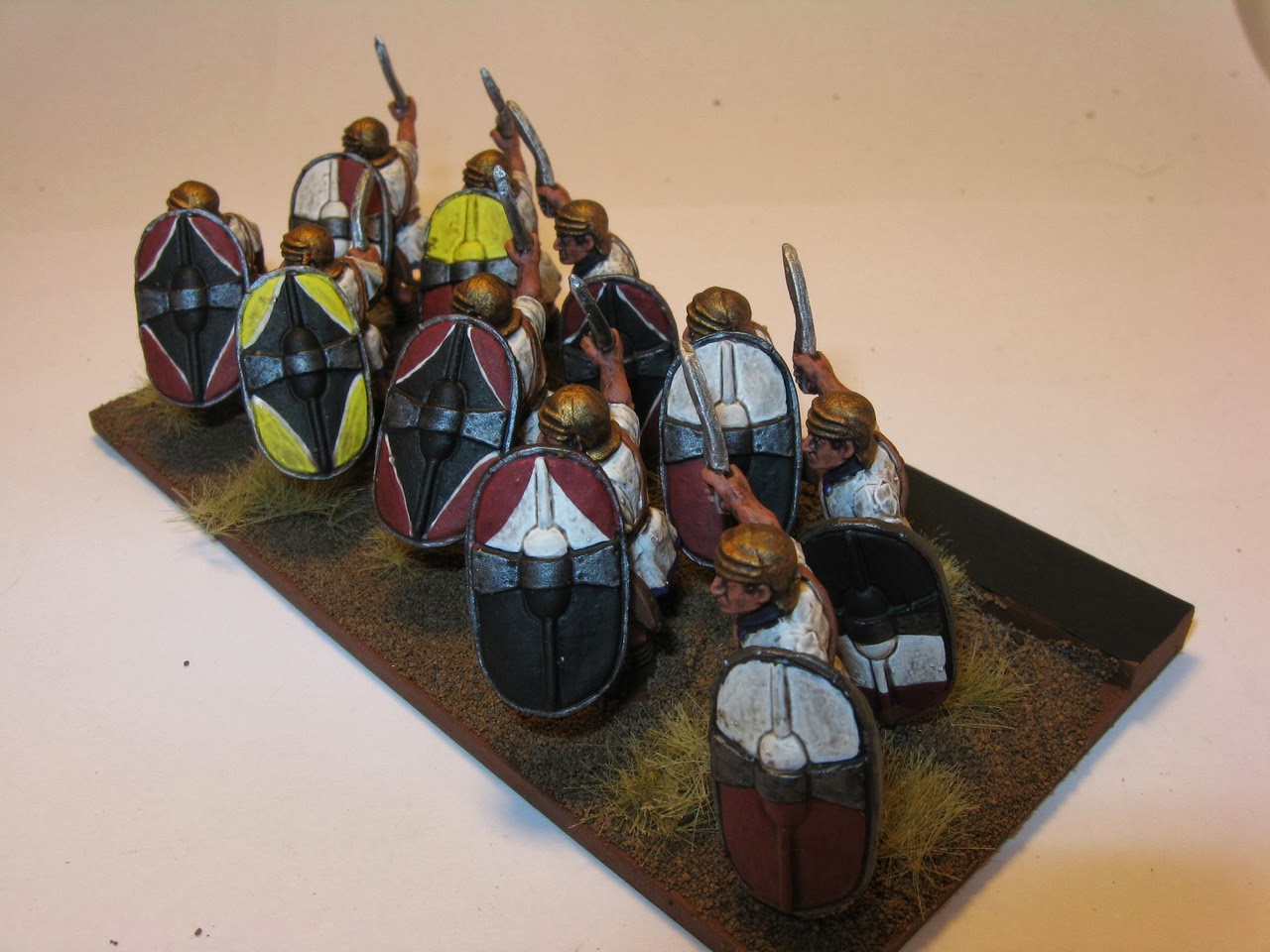 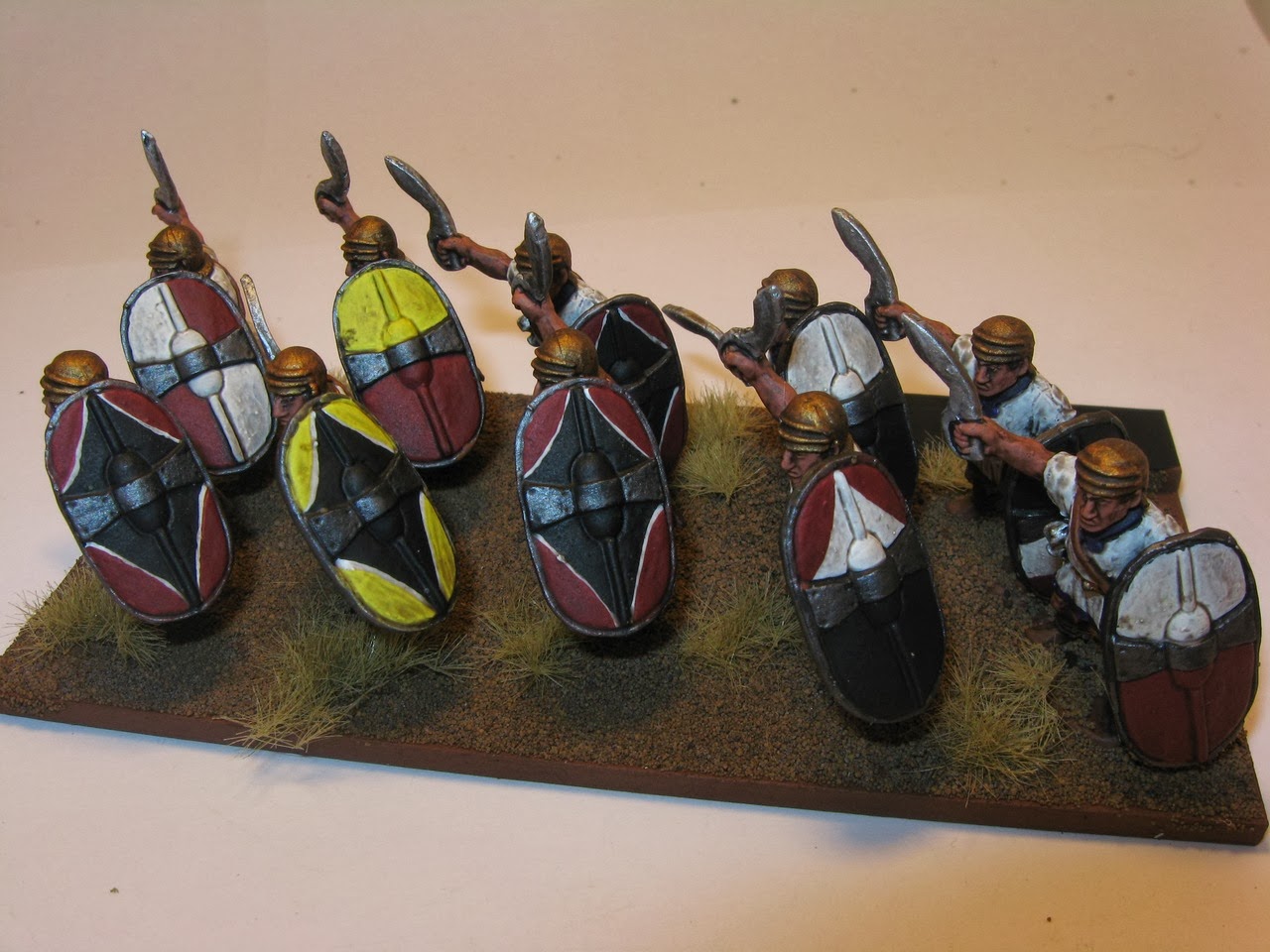 -- a Texas War of Independence Tussle From the Vault
The following two games were fought during the fall of 1999 using a modified version of With MacDuff to the Frontier (MacFarlane's blog where rules can be found) and Old Glory 25mm figures.  I know, a long time ago in a place far away but still an interesting Battle Report to reread after all of these years.  On to the games...
To right a recent injustice, a punitive for force sets out in search of vengeance.  In support of the main expedition inland, the Galveston Expeditionary Force (GEF) is given the task of securing the port at Porto Paquento from which supplies can be off-loaded.  The GEF is composed of two companies of the New Orleans' Greys, one company of Alabama Red Rovers, and one 4lb gun.  Rumors are that Porto Paquento is lightly defended by several under strength Mexican line companies.
As the GEF reaches the outskirts of Porto Paquento, a long line of Mexican troops are seen pouring over the bridge to the north side of town.
Several Mexican companies opted to ford the marshy stream, however, slowing their advance.  Much to the Greys' surprise, a coy of Mexican Grenadiers form up in front of the bridge and force the 1st coy of the Greys to do likewise.
The Greys' 1st coy gives the grenadiers a volley dropping ten men and then charges.  In the assault, five Greys fall while ten more grenadiers are hit.  The pressure is too much for the grenadiers and they fall back to the safety of the buildings.  The position vacated by the grenadiers is quickly replaced by the Mexican 1st Chasseurs who promptly form up and pour a withering fire into the disordered Greys' 1st coy.  The 1st NO Greys' commander is killed.

The Greys hold but the Mexican commander excited about the accuracy of the volley exclaims that his troops are "Bold and Spicy!" As the Mexicans are able to deploy and bring their 4 lb gun to bear, casualties mount for the Greys.
The Mexican rifle coy and the gun in combination drop fifteen men and kill the commander of the 2nd NO Greys.  But the Greys hold. Deployed in a long grey line with the Texican 4 pounder between the two companies, the 1st NO Greys and the gun fire into the 1st Chasseurs.
The Chasseurs lose five men and retreat. The 2nd NO Greys fire into the advancing 3rd line coy killing five, seriously wounding its leader, and halting its advance.  In desperation, the Mexican commander orders the 2nd Chasseurs and 3rd Line to assault the NO Greys.  On the way in, the 2nd Chasseurs lose 15 men to the sharp-shooting 1st NO Greys.  With losses mounting, the 2nd Chasseurs break and run.  The fire from the 2nd NO Greys drop ten from the 3rd causing them to rout as well.  The Red Rovers, hesitant to close with Mexicans, maintain a harassing fire against any Mexicans trying to out-flank the Texicans along the shore.
The 1st Chasseurs are caught by the Red Rovers attempting to reform and rout back into the stream.  With troops streaming to the rear, the Mexican commander orders an evacuation of Porto Paquento.
For Game 2, we reset the scenario and swapped sides.  The game began with both sides advancing into Porto Paquento but thereafter the game had few similarities to Game 1.  The Mexicans brought everyone onto the north side of the river very quickly via the bridge and deployed.
For the Texicans, rather than making a direct approach towards the bridge, the 2nd NO Greys headed for the buildings for cover while the 1st NO Greys marched down the main street of Porto Paquento towards the bridge.  While the 2nd NO Greys headed onto the roof for a better view, the grenadiers fired into and then assaulted the yet to deploy 1st NO Greys.
The 1st NO Greys caught unprepared, fall back to regroup. With the Mexican gun and three companies concentrating fire onto the rooftop, the 2nd NO Greys decide the rooftop was no place to be!
The Greys take refuge inside the buildings.  The Mexican commander capitalizing on the pinned 2nd NO Greys coy, begins outflanking the 1st NO Grey coy using the 1st and 2nd Chasseur coys while the grenadiers maintain pressure.
In close combat among the buildings, the Mexican line coys drive the 2nd NO Grey out of the buildings and into the courtyard. The Rifles join into the attack on the 1st NO Greys coy.  Under punishing fire, the 1st NO Greys are pushed back to the courtyard wall for a "last stand."
In one last assault, the 1st Chasseurs captures the Texican gun by driving off the crew.
With the NO Greys in full retreat, the Red Rovers attempt to cover their retreat.