A Pair of Hittite Chariots 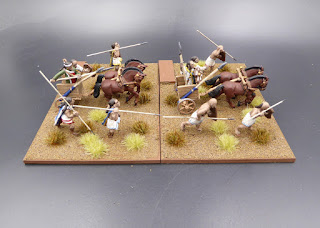 The twelve element Hittite project is in the home stretch now.  Off the workbench this weekend are two chariots and supports.  This brings the total for the project to ten of the twelve planned BMUs finished.
Up first is Chariot #3 in the project.  The chariot and crew are Wargames Foundry.  The runners are from Newline Designs.  While the earlier Newline Designs' Hittite chariots maintained three figure crew, the Wargames Foundry chariot carries a two-figure crew complement.
Up next is Chariot #4.  This stand features Wargames Foundry chariot with Foundry runners.  The Foundry Hittite chariots are slightly smaller than the Newline Designs' chariots.  The Foundry chariot team is slightly smaller too.  Given that the Newline Designs' chariots allow a crew of three vs a crew of two, it seems reasonable that the Newline chariots would be slightly larger.  On the table, there is little difference.
What is left to round out the dozen BMU Hittite Army?  One more chariot and one more unit of javelinmen are all that is holding me back from declaring victory on this 2020 goal.  Both units should be mustering out from the painting desk soon.
Even before putting the finishing touches on the last two units, thoughts have already turned to expanding the Hittites.  One unit of spearmen is in queue with construction beginning on three more chariots.  Enough archers are present to field one or two units of Neo-Hittite archers.  If I stick to those plans, the Hittite army will see a 50% increase in size over my original goal.  Perhaps an 18-BMU Hittite Army ought to be a revised 2020 objective?
Before tackling more Hittites, a number of other projects see additional units winding through the painting queue.  Some of these include Afghan/Pathan warbands and Russian artillery for the 19th Century Great Game, ACW Federal infantry in 28mm (finishing off the last of a Federal brigade), and two regiments of French for the FAW in 18mm.  I bet a few more items are in work too.
Posted by Jonathan Freitag at 12:00 AM 48 comments: 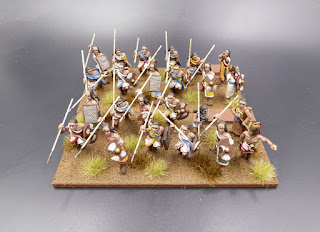 Today, out from the painting desk, sees two units for the growing Hittite project.  This time, two 12-figure units of javelinmen.  For those readers keeping count, the addition of this pair of units brings the total to eight of the planned dozen units.  Figures are Wargames Foundry. 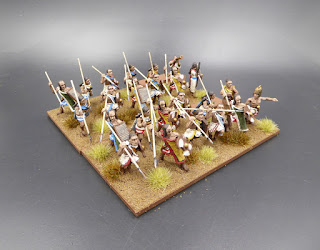 What remains in the painting queue to finish off the first dozen units?  Well, I see one more unit of javelinmen and three more chariots.  Once the initial twelve are completed and if tempted by expansion, The Lead Pile holds five more chariots, two units of spearmen, two of javelin, and two of archers.  Still plenty to field if I want keep focus on Hittites.  Of course, plenty of other projects are seeing action at the painting desk too including a few projects not seeing work in a long while.  When the first dozen Hittites are finished, expect projects to return to a more typical, mixed rotation at the painting desk. 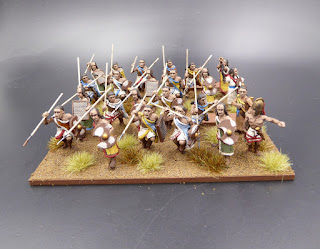 One item often overlooked until almost too late is my supply of Litko bases.  A few of the bases used in my various projects are running low on inventory.  Of particular concern are the Impetvs/TtS! size bases including the little raised label holder on the trailing edge. Looks like I need to make an order this week to resupply before the painting production line grinds to a halt.  I wonder if Litko is having a July 4 sale this year?  Off I go to check...
Posted by Jonathan Freitag at 6:00 AM 44 comments: 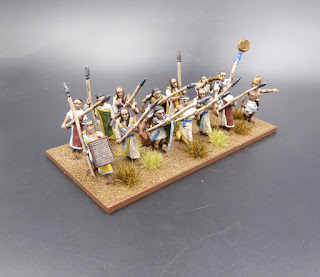 The sixth unit for the Hittite project marches off the painting desk.  With the completion of today's fourteen figure stand, the 2020 goal of fielding a 12-element army of Hittite's reaches the halfway point.  Figures are Wargames Foundry.  The sculpting style of the Foundry Hittites are much different from the Newline Designs' Hittites.  While the Newline Designs' figures are rounded and chunky, the Foundry Hittites look to be hard campaigners and are downright skinny.  Fine sculpts both. 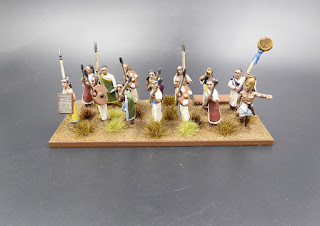 This week marks a major milestone for this homebound wargamer.  That is, Face-to-Face gaming is returning to the Palouse. With no in-person gaming since early January, offers for Thursday and Saturday gaming are on the table.  Having only one or two other gamers in attendance, I am tentatively committed to testing FtF gaming again.  Thursday offers up a Field of Glory game while Saturday will see Fire & Fury in action.  Having not played either in a very long time, the relearning curve to Fire & Fury will be much less so will likely pick the Saturday game.  Actually, playing F&F is almost second nature so the relearning curve ought to be relatively flat. Relatively flat in comparison to Field of Glory, that is.  I have never quite understood that game and it always seems like work rather than recreation.
On the cycling front, weather has improved this week with temperatures expected in the mid-80s all week.  Typically, as the temperatures rise so does the mileage.  We will see if I can stick to that correlation.  Only two days into the week and mileage has already topped 60 miles.  A 32-miler is planned for Tuesday.  Below is one photo from a recent ride while descending into a little valley.  The photo shows the upcoming short and sharp climb on the far side of the valley I must overcome to drag myself up and out of the valley. 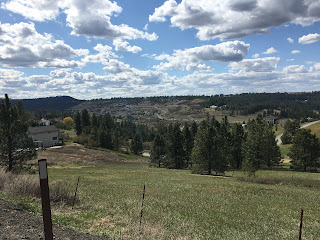 Posted by Jonathan Freitag at 6:30 AM 49 comments: 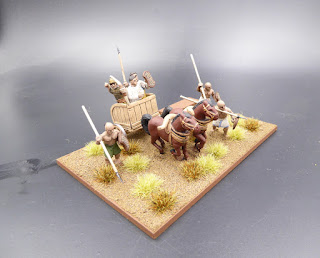 Hittite chariot #2 emerges from the painting desk.  As chariot #1 (see The Hittites are Coming!), this chariot, crew, and entourage are from Newline Designs.  Fine figures in the chunky style of sculpting.  I like them a lot.  Without any empirical evidence, painting the chunky and more rounded sculpts seems easier to paint than Wargames Foundry.  We will see if that holds once I paint a Foundry chariot or two. 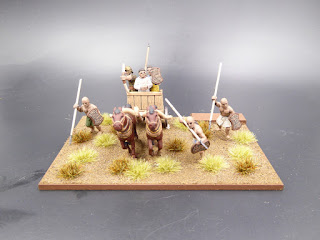 For the initial goal of fielding a 12 element Hittite army, the plan includes five chariots in this 12 element mix.  In this first tranche, three chariots will be sourced from Newline Designs with the remaining two chariots from Wargames Foundry.  Most Hittite Army lists suggest a chariot heavy force.  I will not veer far from that concept.  In the Impetvs terminology, the remainder of the army will be composed of two heavy spear FP BMUs, two archer T BMUs, and finally three javelin FL BMUs.  Once the initial twelve are finished, I may add a unit here and there into the painting queue to add a little more might to the Hittite collection.
On the painting front, May turned out to be OK in number of figures painted.  I managed to just slip past the 100 figure count for the month.  June looks like it may produce more of the same unless a 39-figure pike block can be successfully tackled before month end.  Begun yesterday, my confidence is high, for now.  With figures from a number of different manufacturers as I press into service leftovers in The Lead Pile, this weighty block may take more time than the typical pike block.  Large, Landsknecht pike blocks, are not so easy for me.  Luckily, this may be the last one to hit the painting table for some time since I have emptied the bin!  Of course, there are still several 30-figure bags of Old Glory arquebusiers and crossbowmen and at least one more BMU of Gendarmes in the bin.  Still, plenty to paint if the Italian Wars project calls.
Lots more new units to share in the coming weeks including work from a few projects not seen in a very long time.
Posted by Jonathan Freitag at 12:00 AM 52 comments: 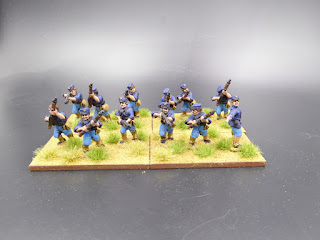 While rummaging around in The Lead Pile to come up with the two bags of US commanders painted recently, I found a handful of US Marines.  Before returning back to work on the Hittites, fourteen US Marines for the Spanish-American War muster off the painting desk.  Figures are 25mm Old Glory. 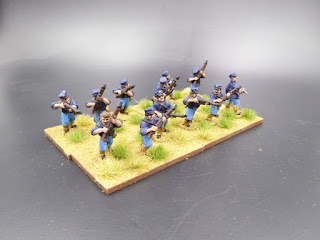 Included in one of the mounted officer packs was a mounted marine.  Now, the marine contingent will have one of its own to lead them into battle.  As always, the Old Glory SAW range is a good one.  With simple uniform, the figures can be painted and fielded with little effort.  When my seven-year old grandson saw the figures on the painting desk, he identified them as policemen.  You know, these could be used as either cops or even prison guards from the 20s and 30s in a Pulp setting. 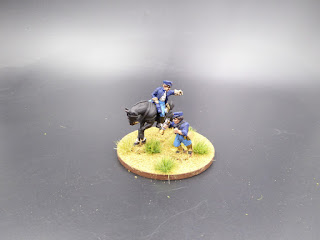 Also surfaced in the dig through The Lead Pile were several more packs of SAW infantry.  One bag contained Spanish infantry in sun helmet.  At least 30 of these figures are already present and ready for duty in their white tropical uniform.  While looking up some other matter on the SAW the other day, I came upon the illustration below: 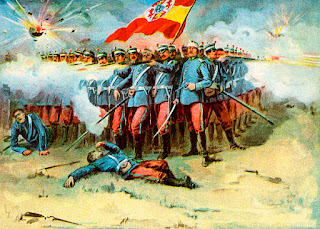 The work by Murat Halstead is entitled, The Last Stand of the Spanish Garrison in Cuba.  From my readings, the Spanish typically wore the tropical whites or rayadillo in Cuba.  If this particular foreign service uniform was worn in Cuba, this would add a lot of color to a Spanish army in Cuba.  Expect to see some Spanish infantry in blue tunic and red pants one day.
Ok, back to the Hittites.
Posted by Jonathan Freitag at 12:00 AM 46 comments: 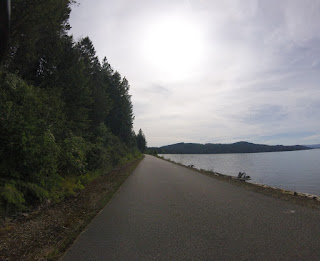 Despite talking with Jake about riding the Trail of the Coeur d'Alenes during our irregular gaming sessions for at least five years, this week we made good on that goal.  Having not seen Jake since early January due to my broken leg and then COVID-19, our schedules and Mother Nature finally gave in.  Yes, we finally made the proposal stick.  The plan was to rendezvous at the Trail of the Coeur d'Alenes' trailhead and take the trail to the small resort town of Harrison and back for a mid-afternoon ride.  Other than the seven mile descent to the lake from the trailhead (and ascent on the return), the route is primarily flat following an abandoned and converted rail line.  The planned round trip totaled 31 miles.  Actual miles logged were 38.
One of the highlights of the route is crossing Lake Coeur d'Alene on the old railroad bridge and causeway at about the eight mile marker.  The railroad bridge and causeway effectively segregates the top of the lake from the the remainder of the lake stretching to the north.
Being an old railway line, the route is flat as mentioned before.  Surrounded by mountains, there are a number of railroad cuts carved through the hills to maintain the desired grade.  These many cuts are narrow and, in places, dramatic.  A sampling of the railroad cuts are below. 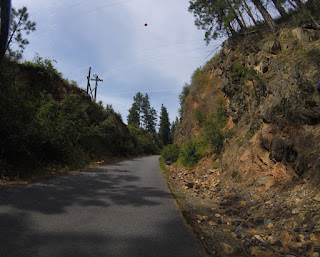 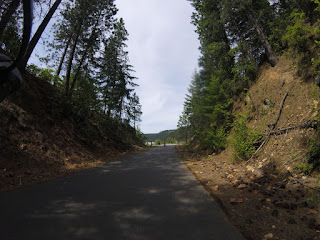 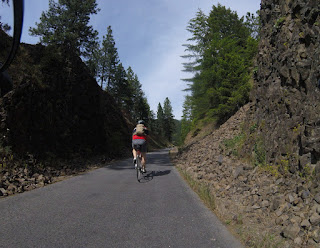 As one would expect of a mountain lake in North Idaho, the scenery is beautiful and the weather pleasant. 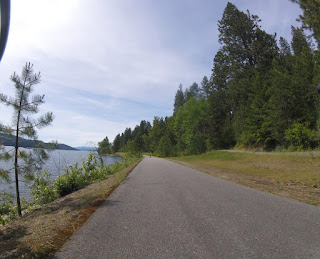 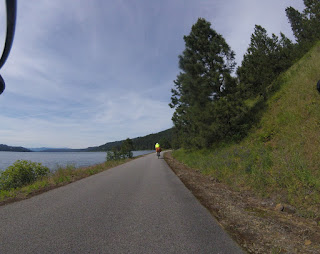 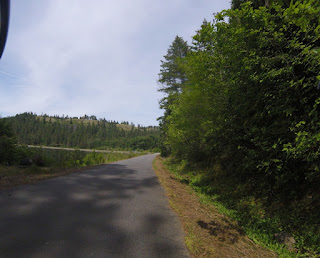 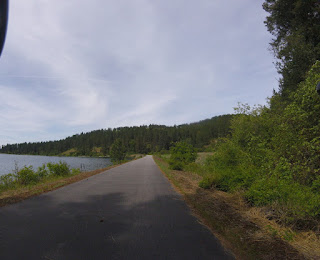 We even came upon a number of fellow cyclists out for a ride. 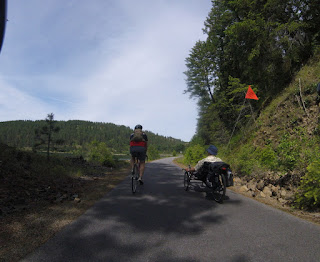 The full Trail of the Coeur d'Alenes runs from the trailhead at Plummer, across Lake Coeur d'Alene and 73 miles to Mullan near the Montana border.  All is paved.  Following our brief stop at Harrison, rather than turning back for the return trip, we pushed on north for a few more miles.  After returning to out starting point at the trailhead, talk turned toward doing this again on a more regular interval; more frequently than once every five years.  The next goal is to take the trail from Plummer to the Cataldo Mission.  That ride would be about 75 miles roundtrip.  I cannot remember the last time I road 75 miles in a single day.
Reaching the trailhead at Plummer is about equidistant for us.  I have a 45 minute drive south from Spokane while Jake has a 45 minute drive north from Moscow.  Once on the trail, with beautiful scenery and good companionship, the miles clicked by with little effort.  This was a good afternoon out on the bike.  I look forward to the next time.
Posted by Jonathan Freitag at 12:00 AM 40 comments: 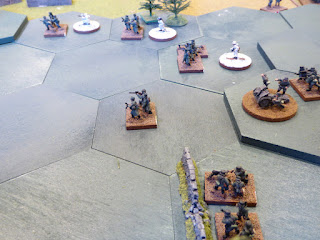