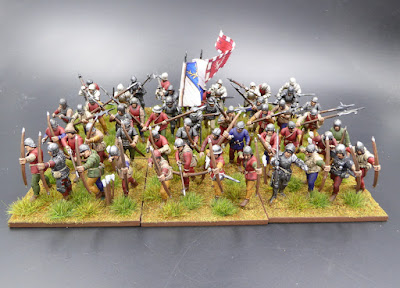 Okay, stop the laughing at the back!  Since this is only the very first unit, it really is too soon to assess whether this is a project or only a slight diversion.  There has been a lot of the interest of late in War of the Roses with either figures, rules, or games.  Given all of these temptations, it is a wonder I lasted so long before succumbing.

Well, I might have made it if not for Richard's L.'s enjoyable series of WotR battles using his own rules.  The battles have been great fun and each player commands only one Battle.  Since all of these games have been played remotely over Zoom or Skype, I have difficulty actually seeing my troops.  My solution was to build a Battle for my own use so that I could see what is what in my lines during the chaos of battle. 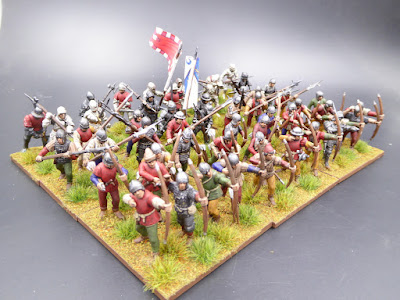 Off the painting desk today is the retinue of Sir William Stanley.  The figures are Perry plastics and putting the figures together was enjoyable.  Coming in at 52 figures strong, Stanley's retinue consists of three lines.  They are:
Once another box of figures arrives, a second retinue is planned.  The Battle of Tewkesbury is on the gaming docket for the Tuesday game.
Posted by Jonathan Freitag at 12:00 AM

Email ThisBlogThis!Share to TwitterShare to FacebookShare to Pinterest
Labels: 28mm War of the Roses, Perry Miniatures