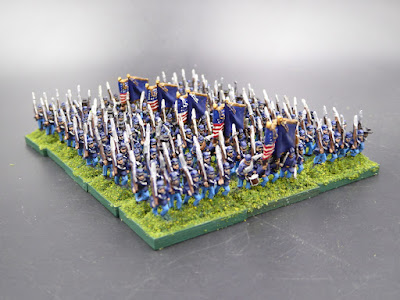 After pushing 120 x 10mm Zouaves through the painting queue recently (see: ACW Zouaves in 10mm), that little momentum provided the motivation to press on with another batch of 10mm figures.  Out from the painting desk today are more Federal infantry for the 10mm ACW project.  This time, five regiments of infantry muster out.  With 30 figure regiments, total count in this tranche is 150 figures.  Figures are Old Glory. 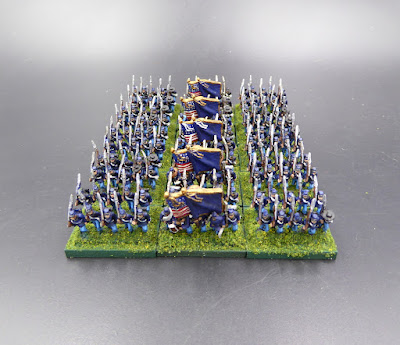 To date, this project tallies about painted 3,500 figures.  Looking back at the Painting Log, not much work has been accomplished into expanding this project for about two years.  That is, not much work prior to the Zouaves hitting the ledger.  With enough figures present to field for most battles, motivation to paint has been lagging.  That situation may change especially with plenty of unpainted lead in the pile.  The project could use more dismounted cavalry for a starter. 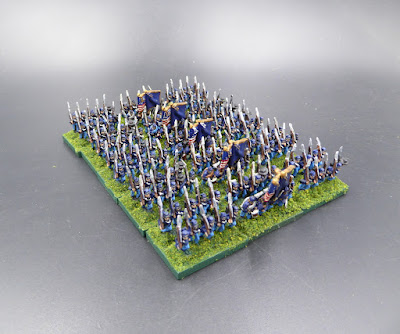 Having new recruits answer the call to arms is prompting thoughts of getting the collection back out onto the gaming table.  So is my recent work on developing an AWI scenario on the British flanking march at Long Island using Norm's Action at Mill Creek scenario map in his Two Flags - One Nation ACW rules as inspiration.  While Norm's latest scenario and map go gridless, my scenario returns to a grid-based game.
The Long Island battle (Action at Shoemaker's Farm) will be presented in the standing Tuesday remote UK gaming session as I host the battle from my game room.  Scenario details on this battle will be provided in the next post.  Rules to be used will be an amended version of Fields of Honor.
Posted by Jonathan Freitag at 5:13 AM