Another Batch of Sumerians 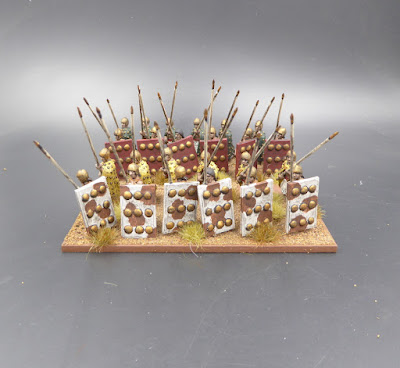 As 2022 winds down, one last tranche of 28mm Sumerians musters out from the painting desk.  Following rapidly upon the heels of their brethren in the previous post, today sees 2 x 12-figure units of heavy spearmen march out. 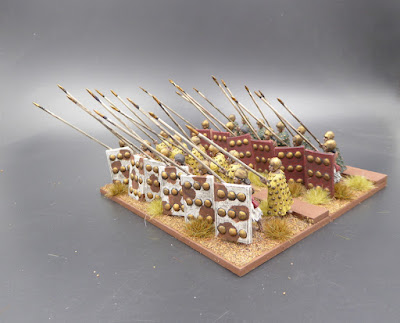 The figures are all Wargames Foundry Sumerians and these are the last spearmen in The Lead Pile.  Actually, only two more battle carts and a handful of skirmishers remain unpainted for this project. 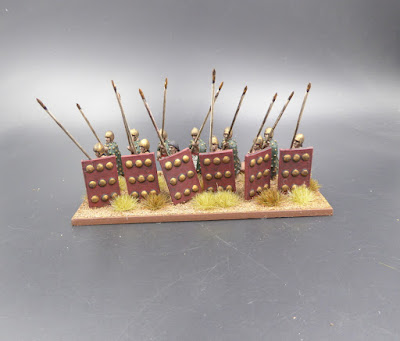 With 19 units completed in 2022, the project nearly doubled in size.  The project, only begun in June of 2021, now fields 44 units in the collection.  The collection has even seen battle two or three times in 2022. 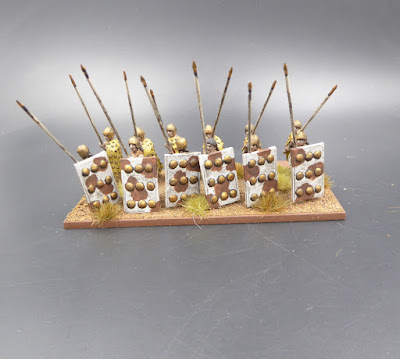 As it stands now, the Sumerian collection has six battle carts and about 300 infantry.  Enough figures and equipment to field two equally matched armies.  Should I remain satisfied that enough BMUs are present under arms for a game or look toward continued, moderate expansion in the New Year?
With the traditional Newline Design's annual January sale on the horizon, perhaps I could use a few more units?
While I ponder that decision, clearing the table for a parade may be warranted.
Meic, if you are reading, a little more temptation for you.
Posted by Jonathan Freitag at 12:00 AM 50 comments:

Sumerians and a Game Not Played 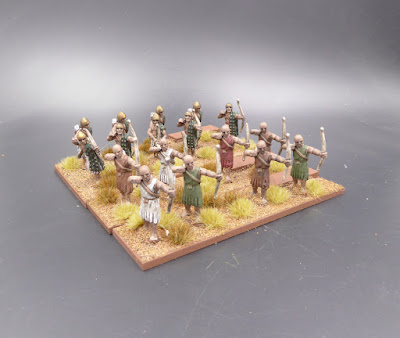 First, I hope everyone is enjoying a holiday break.
Second, with a steady stream of games and battle reports of late, few figures have shown up on the blog.
In an effort to clear some of the logjam at the photo booth, up today are more Sumerians in 28mm.  All figures are Newline Designs.  With The Lead Pile running low of Newline Design figures, one New Year's wish is that we see another January sale so that I can replenish the coffers. 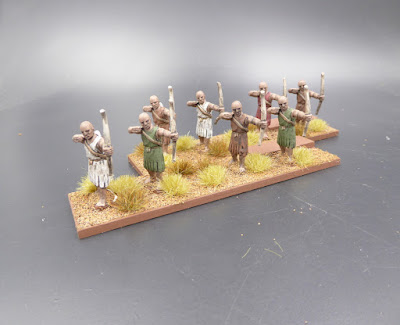 First up are two, four-figure stands of Sumerian archers skirmishing.  As always, these are based for Impetvs or To the Strongest!. 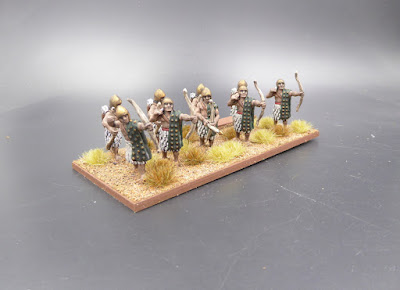 Next up is a nine-figure stand of massed archers.  These will classify as 'T' missile under Impetvs.  Accounting shows I can field seven such massed bow units.
Two more, 12-figure heavy spear units are waiting in the wings for a chance at a photo op.
The gaming slate has lightened during the holidays.  I have a remote game scheduled for Tuesday in which Chris is hosting his first remote game (hooray!).  The game looks to see action in the AWI using Loose Files and American Scramble.  Not a ruleset to which I am familiar but sure to pick it up quickly.  Having played British Grenadier, the concepts are not foreign.  A return to recreating Samurai battles is back on the front burner again after a long hiatus.
Unfortunately, I had to cancel last week's pre-Christmas game due to an aching back.  The action was to see a return to Old West gunfights with a collection having seen no action in more than 20 years.  Hopefully, I can get this one rescheduled.  The table was laid out, character cards drawn up, and a scenario in place.
Until next time...
Posted by Jonathan Freitag at 6:28 AM 45 comments: 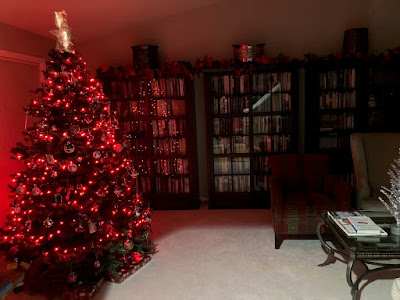 To all readers who visit on purpose or by accident, regularly or irregularly, in silence or with comment, I wish you all
a
Very Merry Christmas!
Posted by Jonathan Freitag at 7:24 AM 83 comments:

Matt drew up the Battle of Plataea to fight out on his table recently.  We used a hex grid and my Basic Impetvs variant.  Having fought gridded battles in other periods, Matt was ready to take the fight to the Greco-Persian Wars.  Matt tells his side of the story at, Battle of Plataea, 479BC.  Time to tell the battle account from the Persian perspective.
The battle begins with both armies deployed across the 6' x 4' table.  Each army is arrayed into three distinct wings.  I would command the Persian Army.  For the Persians, Theban Hoplites are deployed on the right wing.  Persian Immortals and much of the cavalry are deployed on the left.  The Persian center is occupied by an assortment of light troops.  The battlefield is effectively split by the Asopus Ridge.  Reinforcing one wing from the other will be impossible.
On to battle!
Matt and his Spartans are victorious but only by a hair.
With the Battle Clock down to one point apiece, one more loss or retreat would bring either victory or defeat.  Unfortunately for my Persians, it brought defeat but only by the narrowest of margins.
This refight of Plataea resulted in one of the most closely contested fights I have seen in ages.  Victorious on the left, the Persians sensed victory could be theirs on this day.  The Greeks had other ideas, though.  Thoroughly dismantling the Thebans on the Persian right, the destruction was complete.
Congratulations to Matt for a well-played hand and a superb game.
One day, I would enjoy a rematch.
Posted by Jonathan Freitag at 8:26 AM 32 comments: 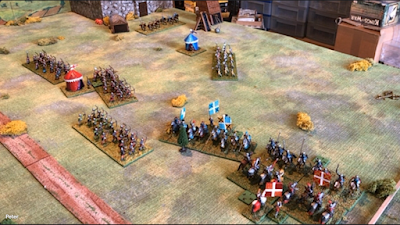 Following my Jacobite Rebellion game with Peter using his OHW's D3 variant (see: D3 or Not D3), we returned to his table for another remote game using another D3 variant.  This time, we explore his Medieval D3 OHW variant.  Really, I think it insincere to label this an OHW variant as not much is left from the original.

As mentioned, today's battle featured Peter's Medieval D3 rules with his 25mm Minifig HYW armies out on the table.  The battle considered for today's contest is the Battle of Auberoche in 1345.  The scenario for Auberoche is based upon Thomas' OHW's Scenario 22 AMBUSH.  For battle and scenario details, please visit Peter's blog at Battle of Auberoche, 1345.  Essentially, the French army has been caught unprepared and encamped besieging a castle as the English fall upon them.

The battle begins with French deploying around the encampments on the table.  The French begin with a 9 BMU to 6 BMU advantage but may not activate until Turn 3.  That means the English enjoy three turns to move and fight before the French may respond.  Before the battle began, Peter's solo play resulted in one win apiece for the combatants.

Let's see how the battle played out.

I deploy the French with two levy units closest to the English occupied woods with the third levy overseeing the castle.  On Turn 6, English cavalry may sally forth from the castle so the French need a speed bump on this front.

In the second line, both crossbow units are deployed.  MAA follow up in the third line.  The two knights are placed in the fourth line.

Knowing that the English will enjoy three turns of uninterrupted firing from their longbows before the French can react, the first three turns will be tense for the French.  I expect to take a pounding early on.  With a unit only able to sustain about three volleys, on average, before being destroyed, heavy casualties are expected.  If all three English longbow units fire for three turns, three French units could be hors de combat before there is any chance to respond.

Like clockwork, by Turn 3, two French levy units have been destroyed by English fire.  Two units of French crossbow are destroyed by Turn 4 as the French army begins to respond.  Already, the French are down four units and the battle (for the French) has only begun.

A great fight and one in which I thought the French had little chance for success.

Posted by Jonathan Freitag at 2:12 AM 45 comments:

This has been a busy week at the gaming table.  I managed a mini marathon of four battles in four successive days. Four hosts presenting four battles from four different periods provide great variety in scope.  While I published a battle report on one of the four (Cropredy Bridge), three more are yet be chronicled here.  In the meantime, below is a recap of the gaming activities with links to battle reports where available.

The week kicked off with a replay of ECW Battle of Cropredy Bridge.  In this edition, the Royalists pulled out a decisive victory. 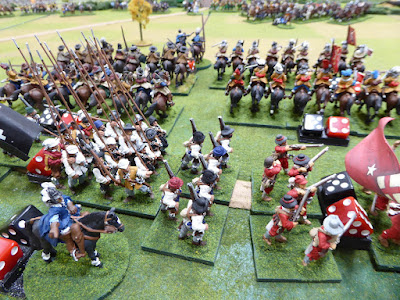 Tuesday's game saw players fighting it out in France during the French Wars of Religion.  The battle was closely contested until the internet went out at the host site.  We may have to draw our own conclusions on the outcome since the battle was cut short. 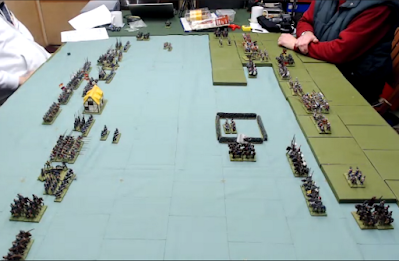 Wednesday saw Matt and I punch it out over the fields of Plataea in a hotly contested and very exciting battle.

Matt's Battle Report at: The Battle of Plataea 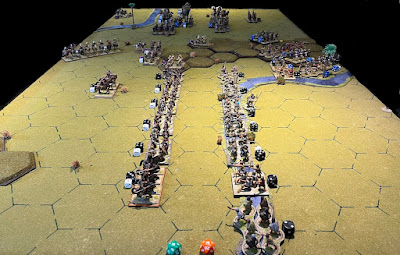 Thursday saw Peter and I lock horns on the fields of Auberoche as the French are caught in ambush by the English.  Another battle that came down to the wire. 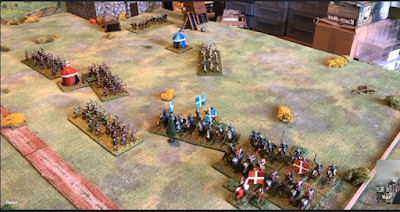 I could use a rest.