Grenadiers of Sardinia in 1859 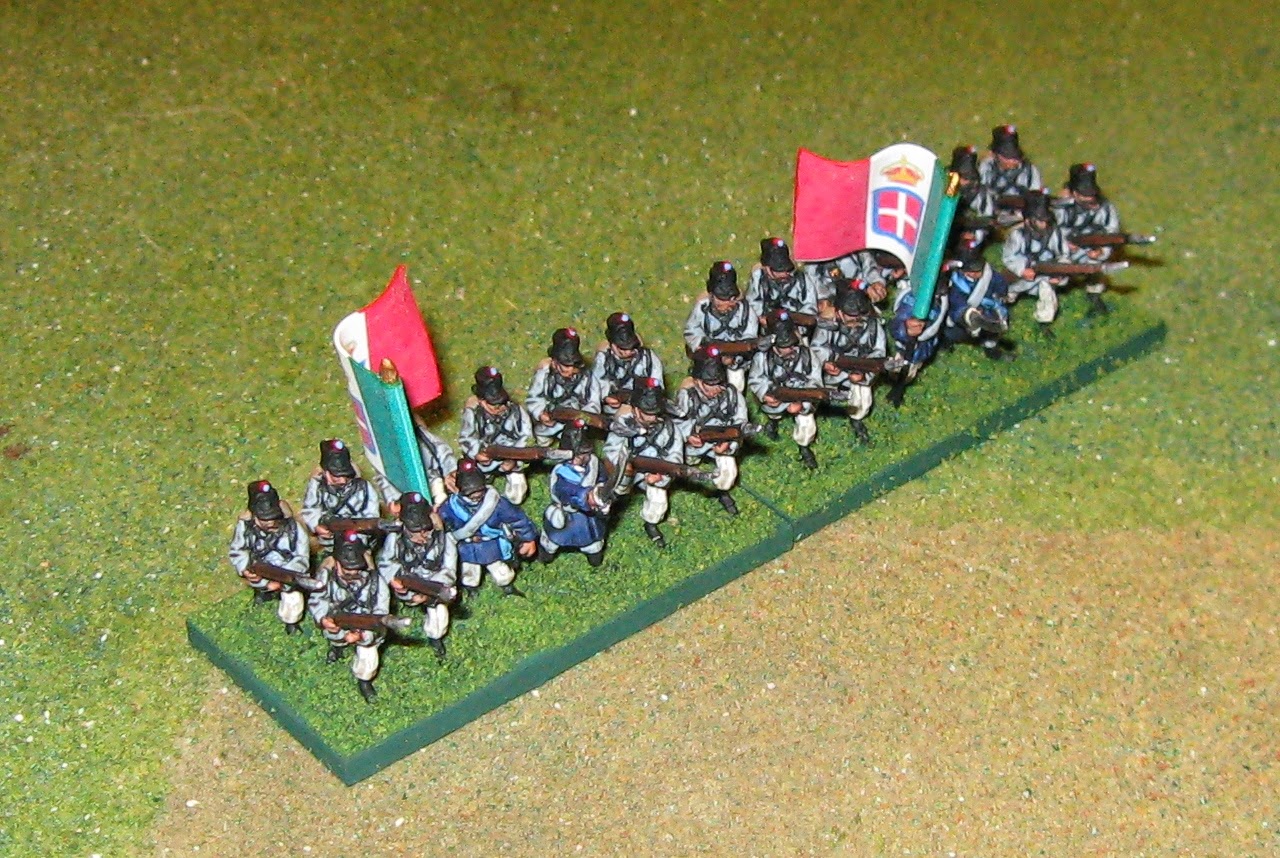 Continuing on with the 15mm Risorgimento (1859) project, mustering from the painting desk are two battalions (24 figures) of the 1st Sardinian Grenadier Regiment.  Like the Sardinian line regiments, the grenadier regiments each field four battalions.  The two grenadier regiments were brigaded into the 1st Brigade of Durando's division during the short campaign. 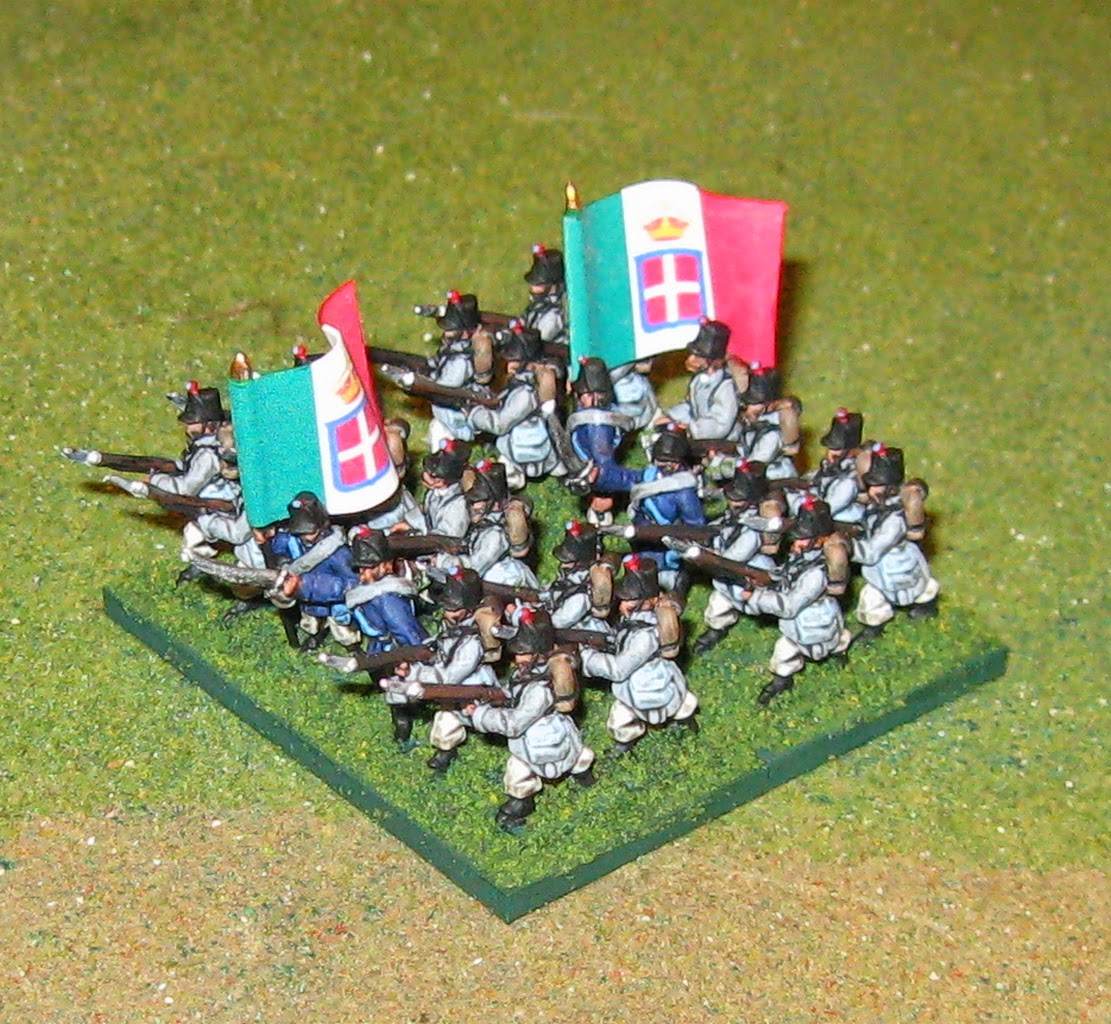 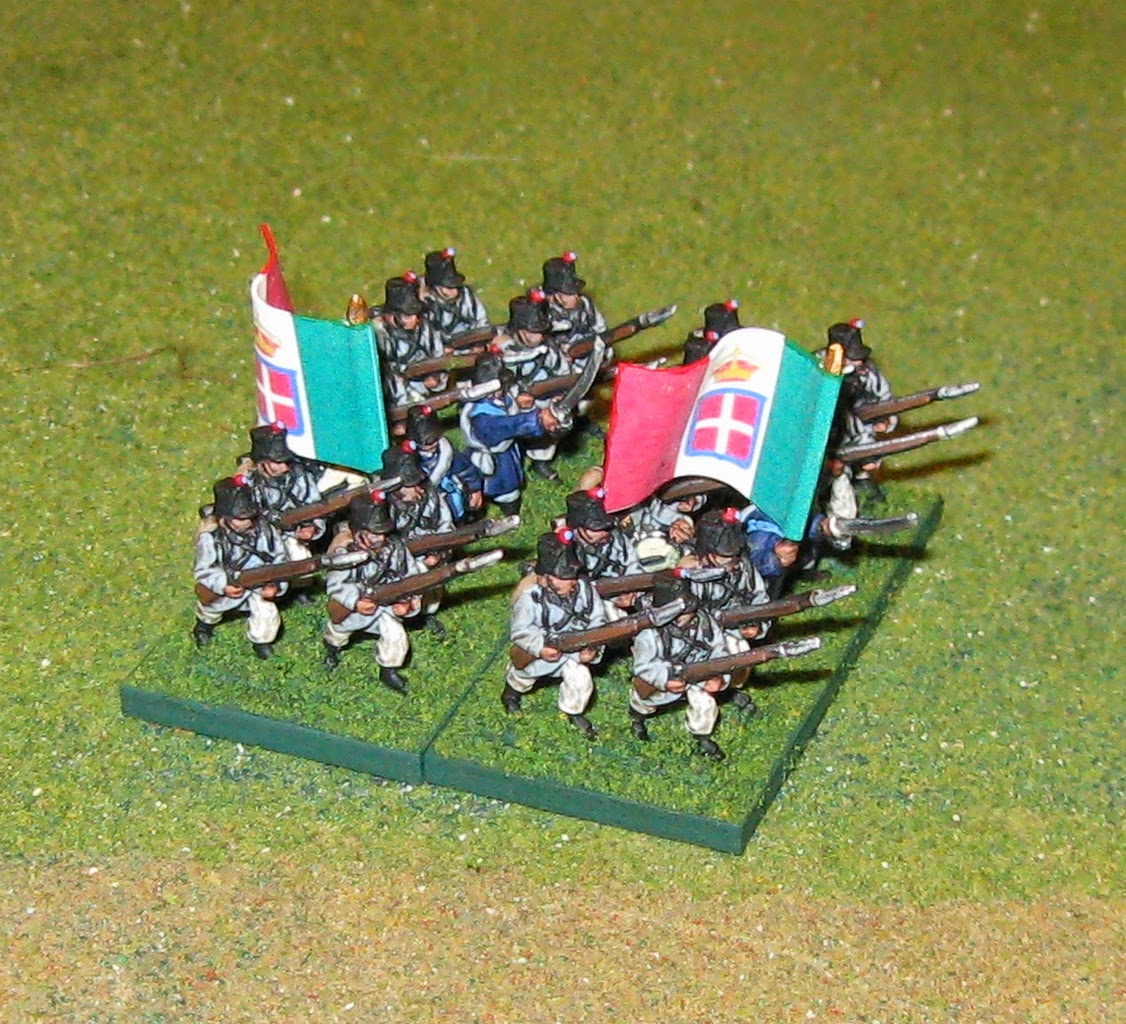 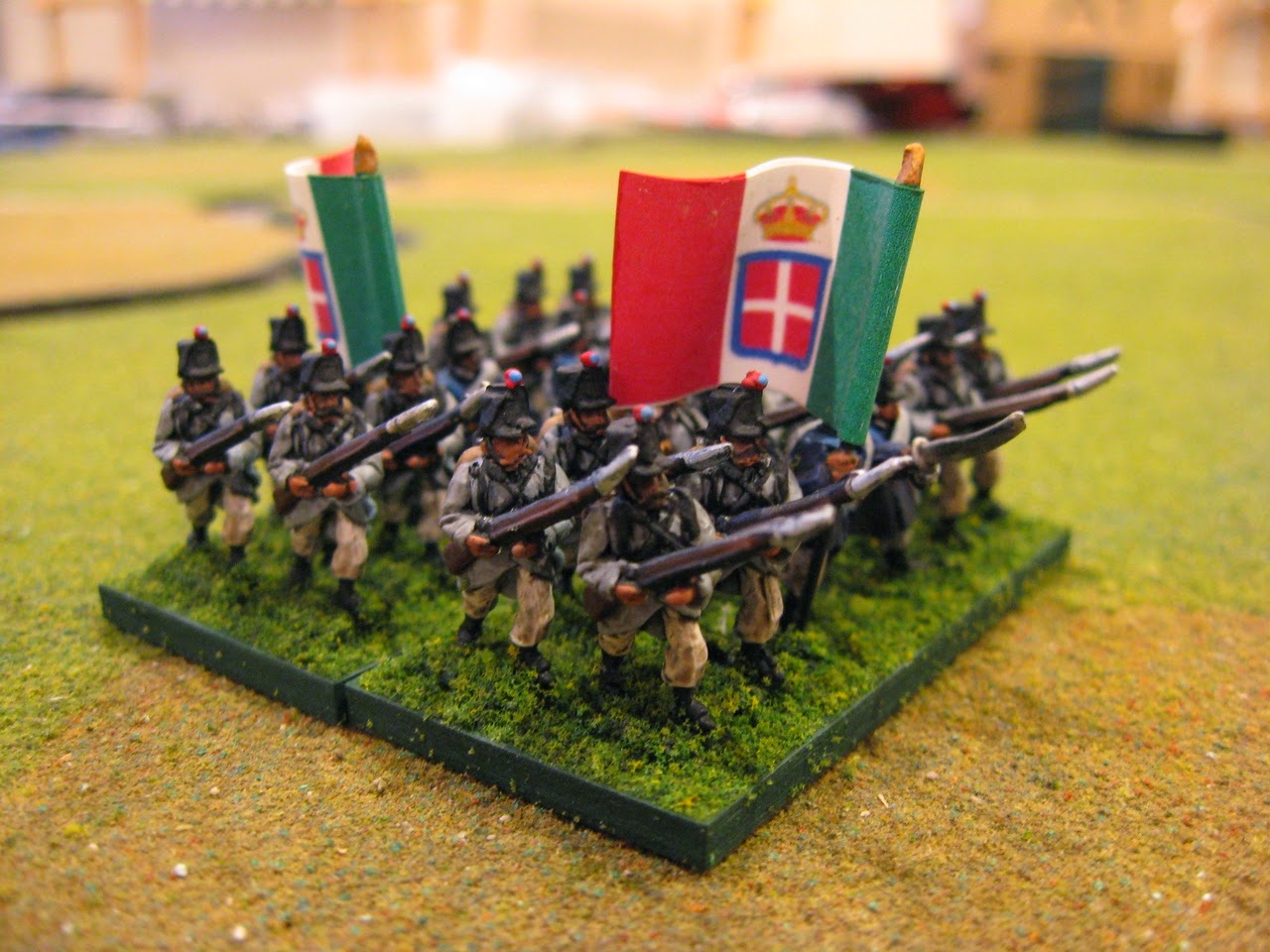 The figures are from Lancashire Games.
Posted by Jonathan Freitag at 9:00 AM 21 comments:

Maybe that should be "lumbering along?"  Anyway, off the painting desk this afternoon are three 15mm Austrian limbers each with teams of six.  These limbers exhaust the stockpile of Austrian limbers.  With the addition of these three limber teams, the project now can muster eight total limbers and teams.  I hope eight is enough.  The figures are Freikorps 15s. 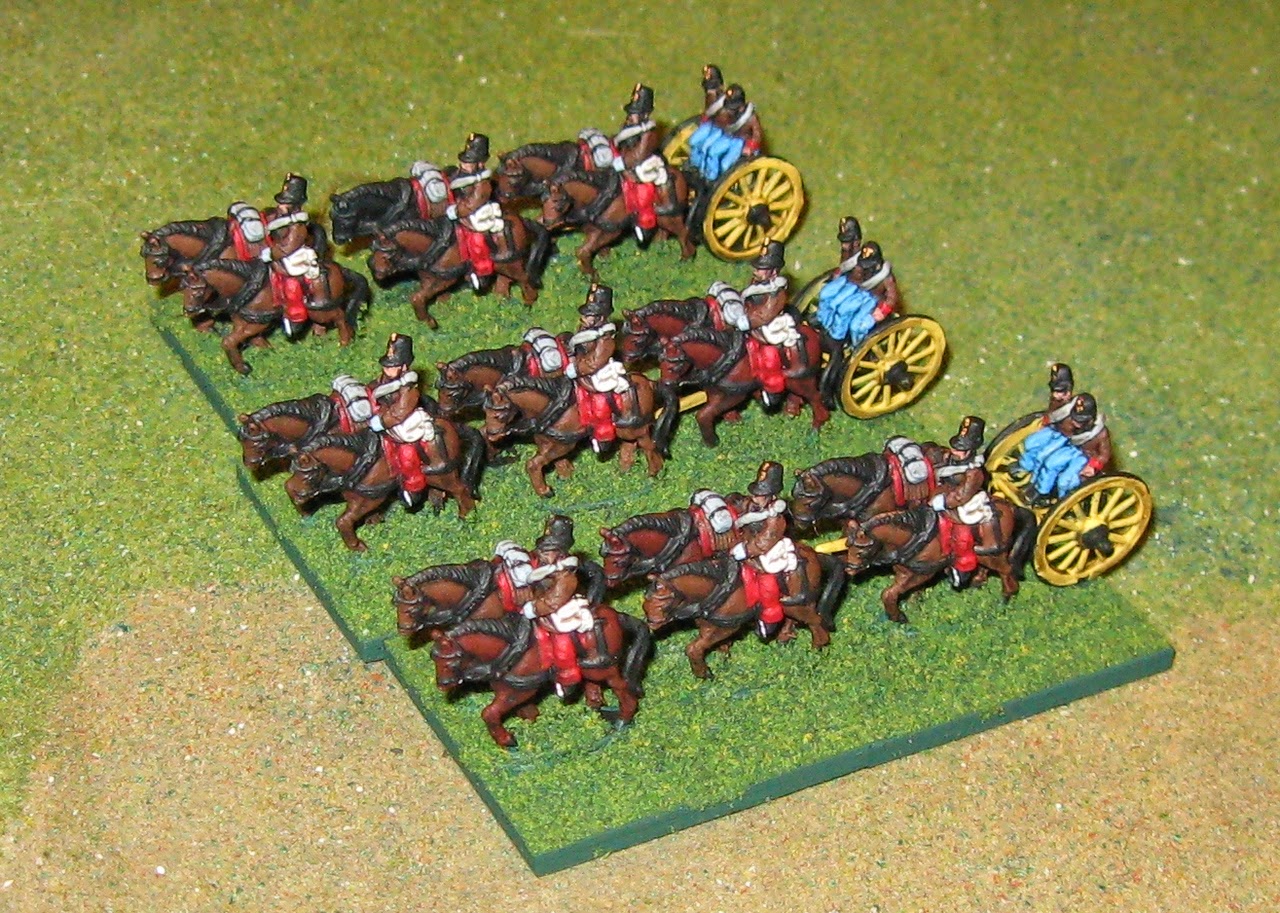 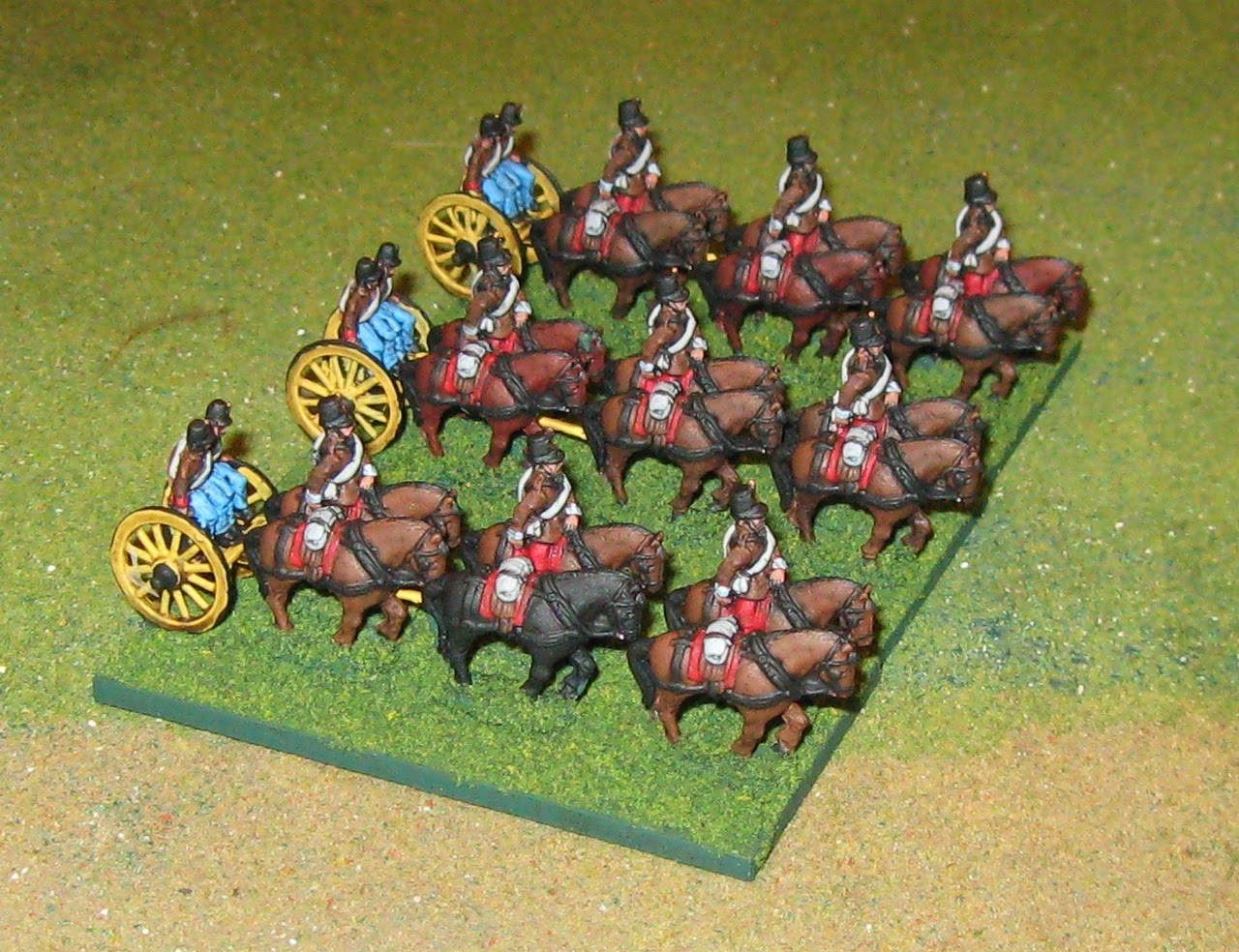 Looking back at old blog posts, I find it hard to believe that it has been two years since the 1859 project has been out on the table for a review (DEC2012 1859 Review).  About 100 infantry and a number of limbers were added in 2014.  Progress has slowed since managing enough figures to refight the northern portion of Solferino (San Martino) in 2013.  That battle was a fun exercise and an interesting situation for both combatants.  I may try that again.  Perhaps, now, there are enough battalions to include the Sardinian outflanking maneuver on Madonna della Scoperta as part of the San Martino battle? 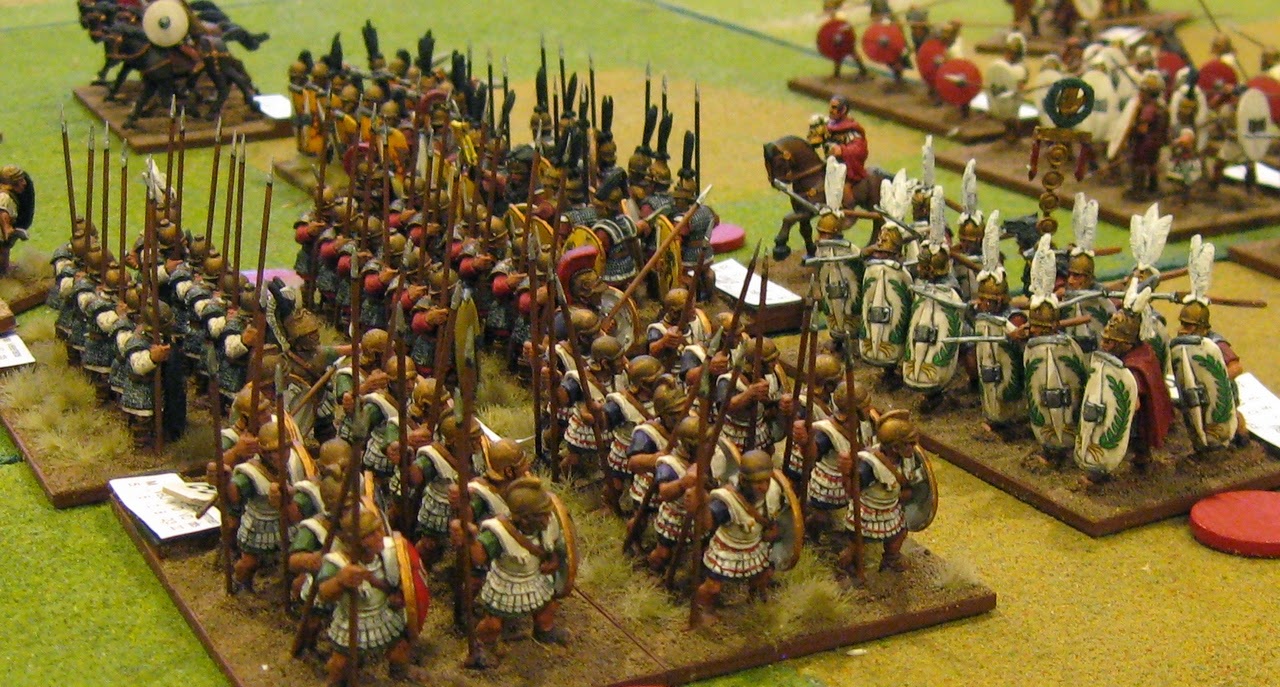 The guys gathered a couple of weeks back for an Impetvs game set during the Punic Wars.  This meeting gave me a chance to get the 28mm Punic Wars collection out onto the gaming table and introduce several of the guys to Impetvs.  Tabletop deployments also provided and opportunity to assess the state of the project.  Once set out, enough figures were available to provide four battle groups of almost identical size.  While I moderated, Jake and Kevin commanded the Carthaginians while Scott and Dylan took command of the Romans.  Of the four players, only Jake had any experience with Impetvs beforehand.

For the Carthaginians, Jake commanded the left wing and Kevin commanded the right.  For the Romans, Scott commanded the Roman left while Dylan took command of the right.  All commanders had a combination of foot and horse at their disposal.  "Disposal" is a good term to describe the carnage about to happen!

The two combatants were arrayed in two battle lines with the Carthaginians on the left and the Romans on the right.
And the winner is...Rome!


Victory goes to Rome by the slightest of margins.  Casualties were heavy across the board.  Only Scott's Roman infantry on the left and a few of Jake's Spanish on the right maintain any offensive punch.  With the Carthaginian right in tatters, the carnage halts as the Carthaginians disengage.

The fight on the Roman right was much closer than it looked.  Jake's Spanish were nearing their break point as Dylan's Romans exceeded theirs.  I used the expedient of giving each Battle Group its own break point rather than an army break point.  The latter would have allowed the Roman right to continue fighting.  No matter; the game was hotly contested and we reached a conclusion within about three hours. I say, most participants were pleased with the outcome.

With no prior experience with Impetvs, Scott, Kevin, and Dylan picked up the mechanisms quickly and the game progressed at a rapid pace.
All agreed it was a fun contest and that Impetvs provides a very entertaining game.  All are looking forward to more such action.

For the 28mm Punic Wars project, I need to field more Roman legions and an elephant or two would be most useful.

Anatomy of a Project - Napoleonics in 28 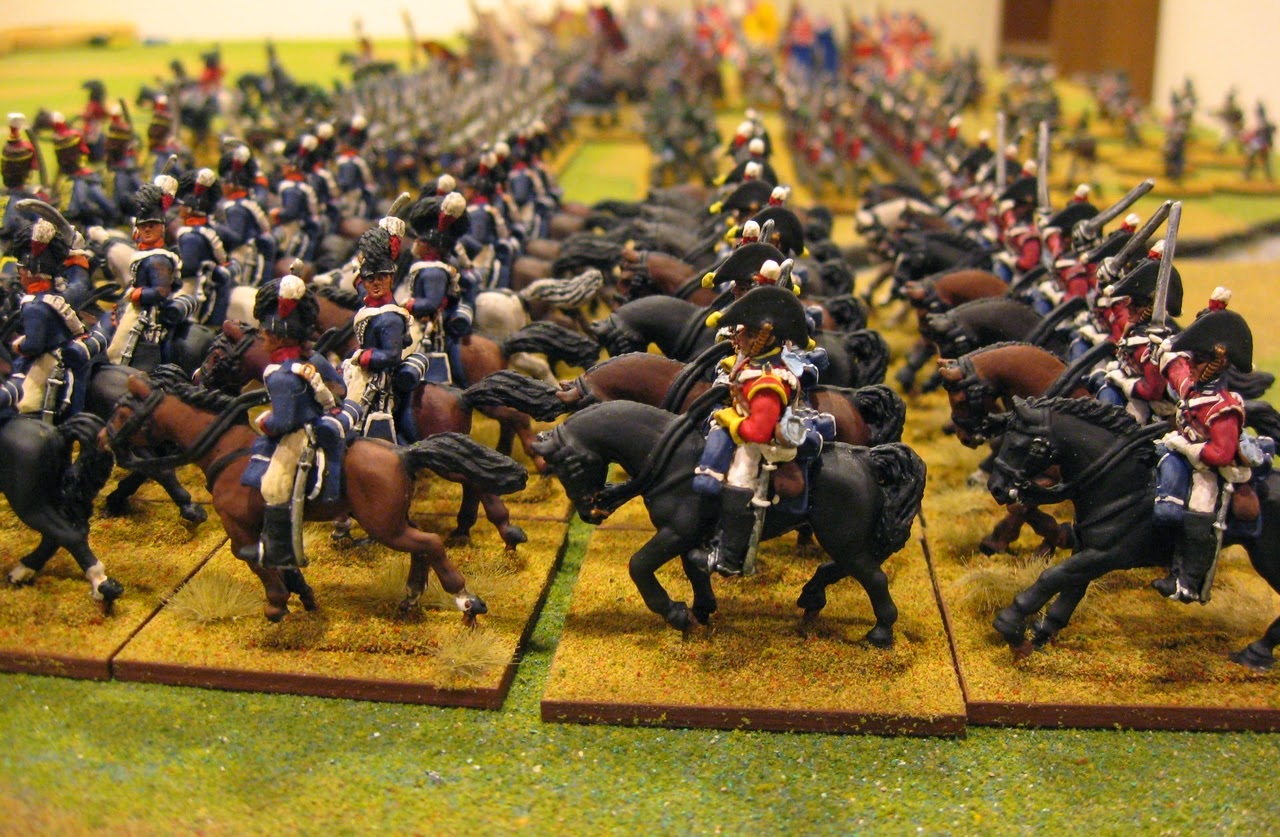 Being out of town and away from the painting desk for the week, hobby activities are confined to reflection and reading.  No painting this week...

Given a recent influx of Napoleonic lead, I thought it might be a good time to take stock of the 28mm Napoleonic project.  What better way to see what I have accomplished than to deploy the forces on the table?  Often, it is easy to forget exactly what has mustered off the painting desk without holding an occasional Pass In Review. 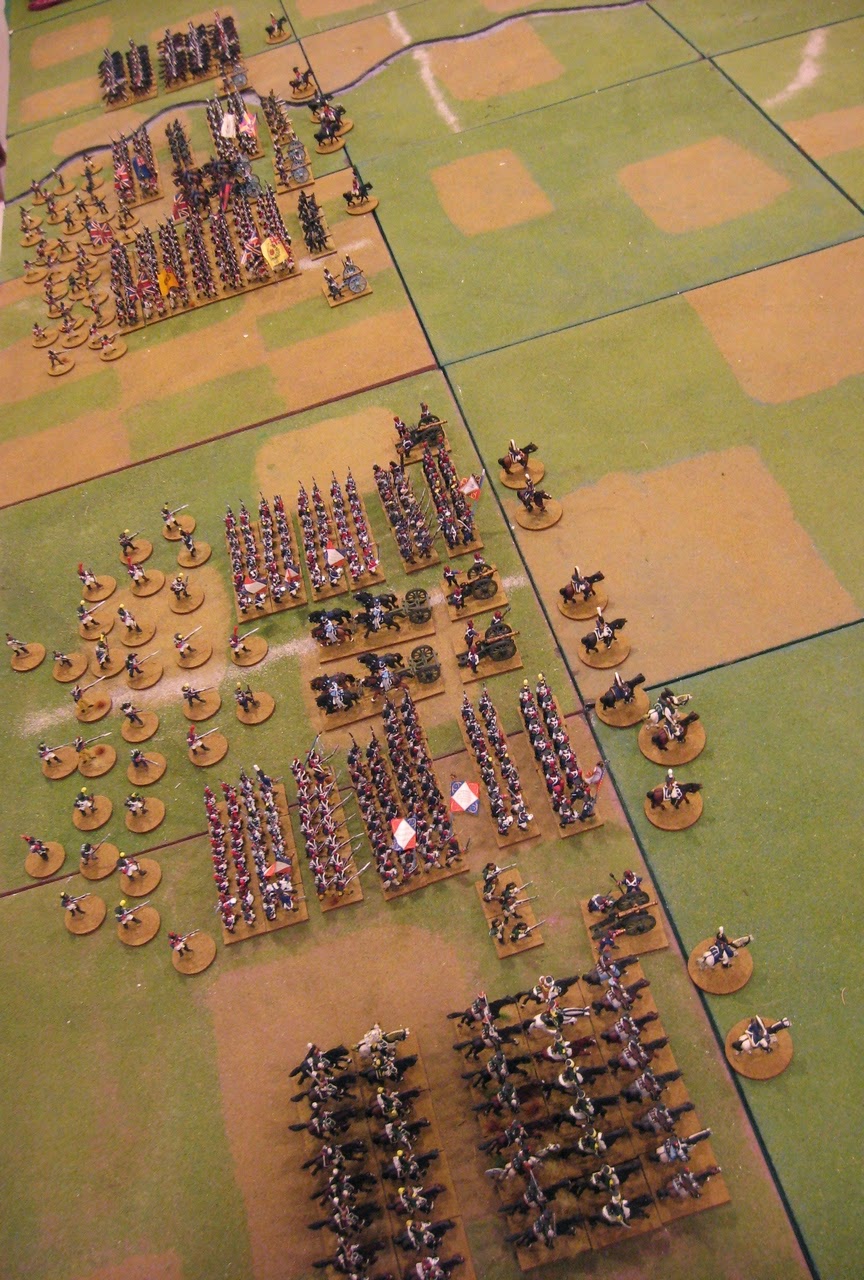 First, a bit of project history.  This project first sparked to life in 2005 and then quickly went into a hiatus.  You see, this was a "buddy" project.  My friend had purchased several units of British and French Front Rank figures.  He wanted to field the French and asked me to buy out the British.  He envisioned painting these two forces for small Peninsular War actions.  Of course, I agreed.  Paint a few units and have some enjoyable games with a friend. 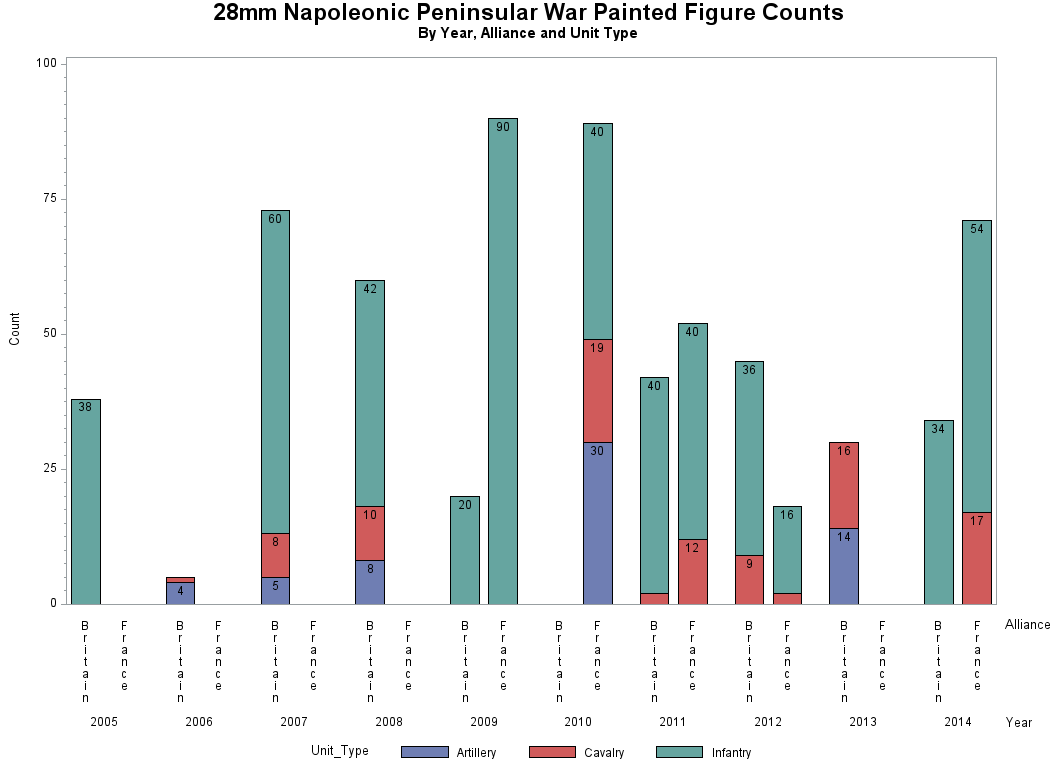 After painting a few of the British infantry battalions, I noticed no progress on the French call up.  I continued to knock out a few units but after a few years, still no action on the French activation. 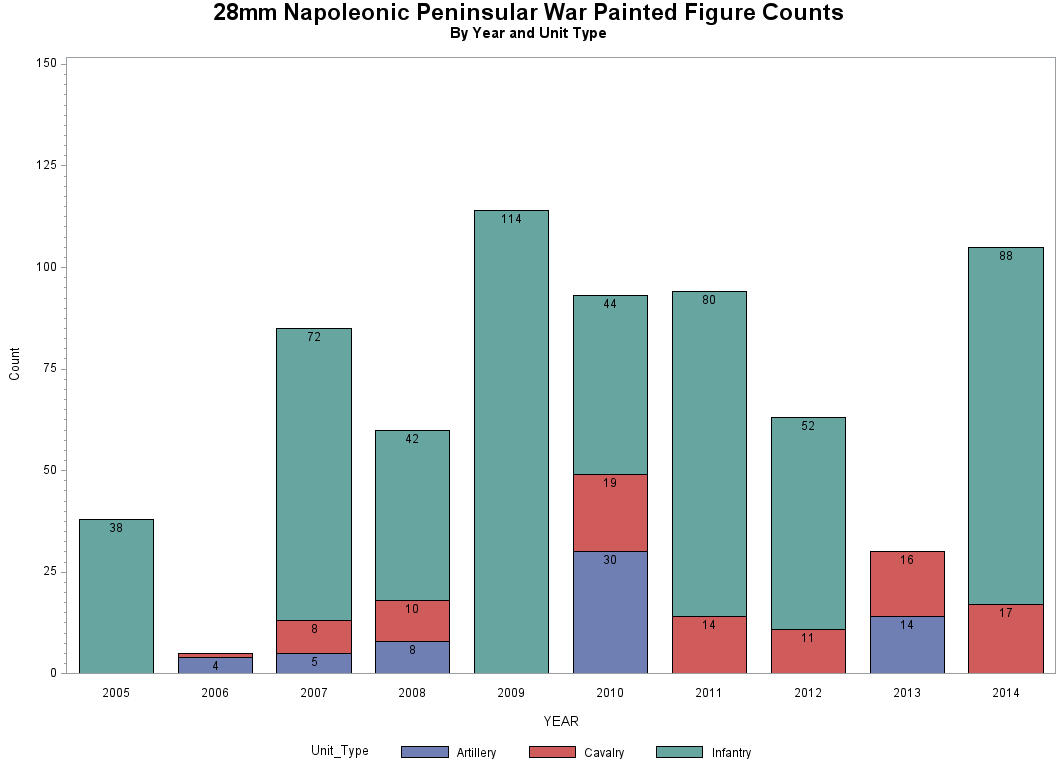 Unfortunately, my friend became very sick and ended up selling his French figures to another buddy.  I finally came to the realization that if I planned to put this British force to work, they needed an opponent.  My solution?  Build a French force to oppose the British.

Although never a priority project, after a little less than ten years, the project stands with two very playable forces.  This collection has actually seen combat on the gaming table in 2014.  Twice! 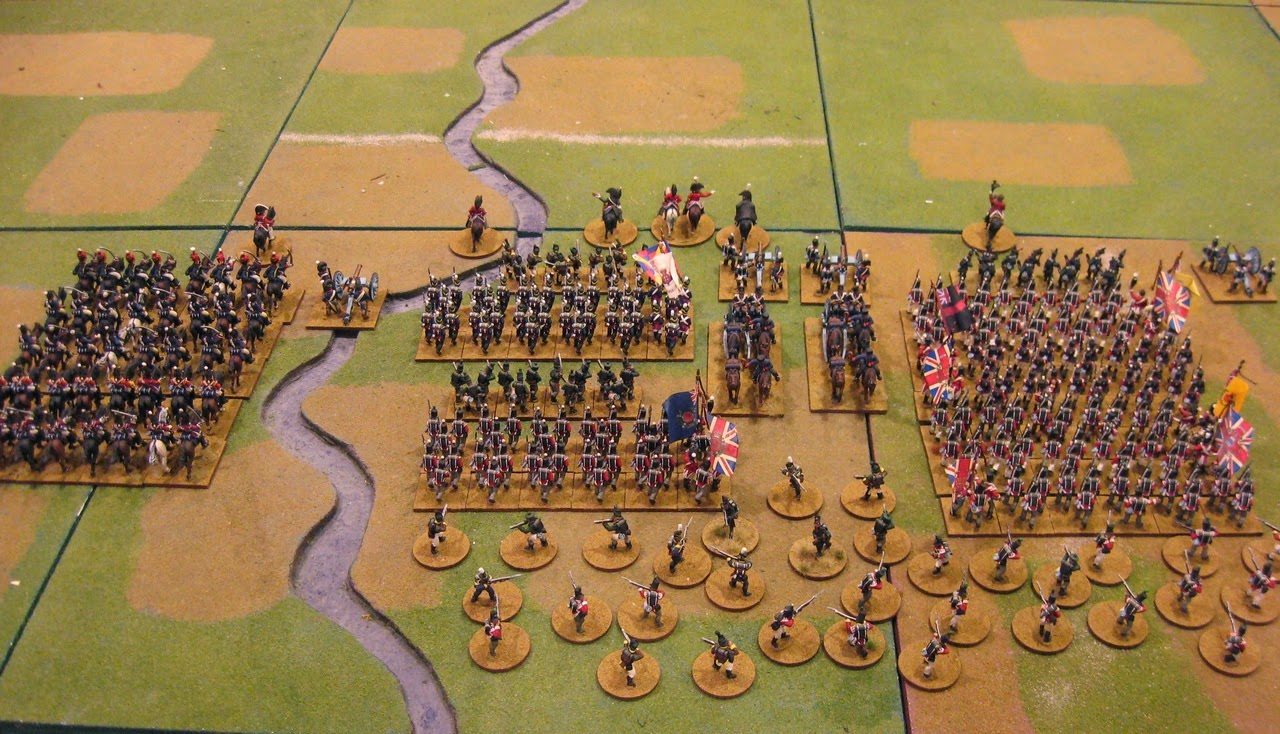 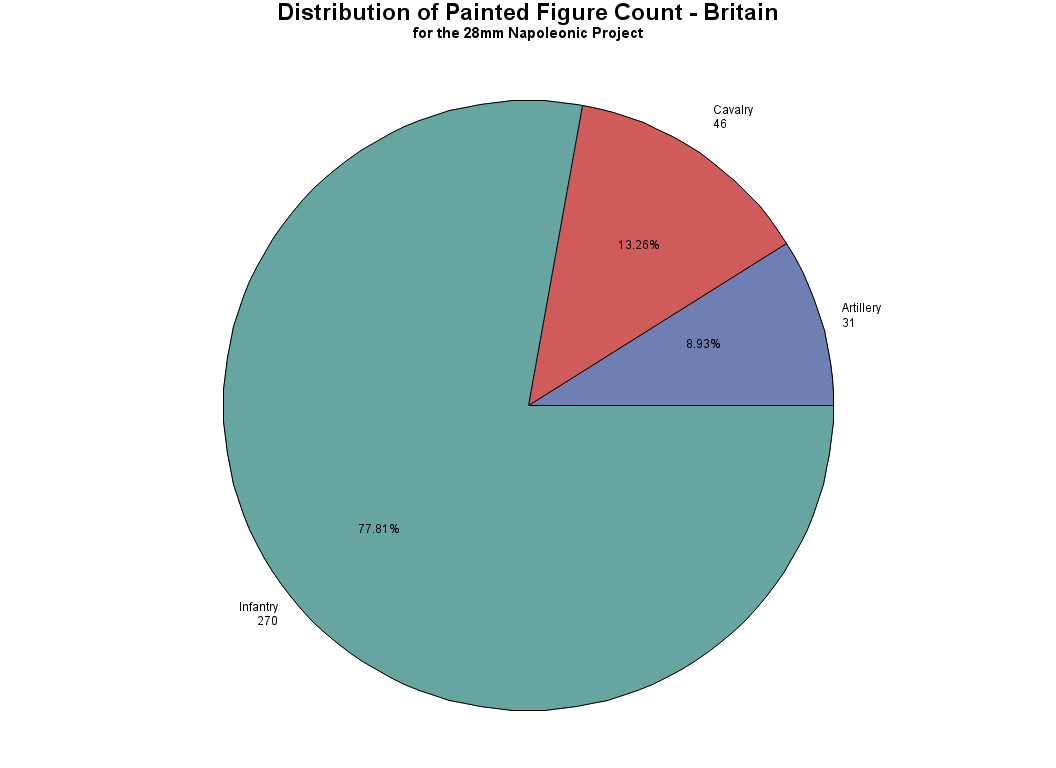 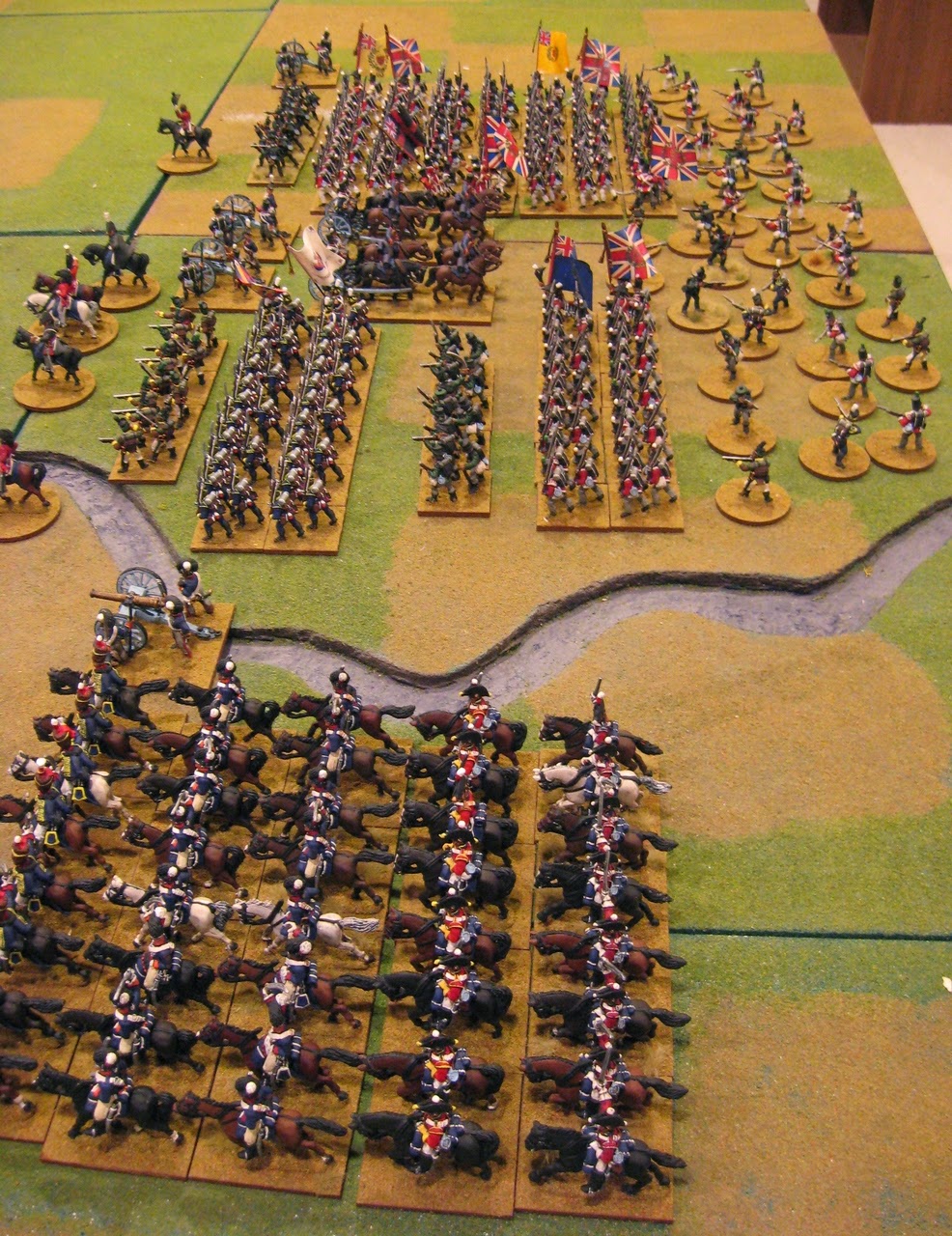 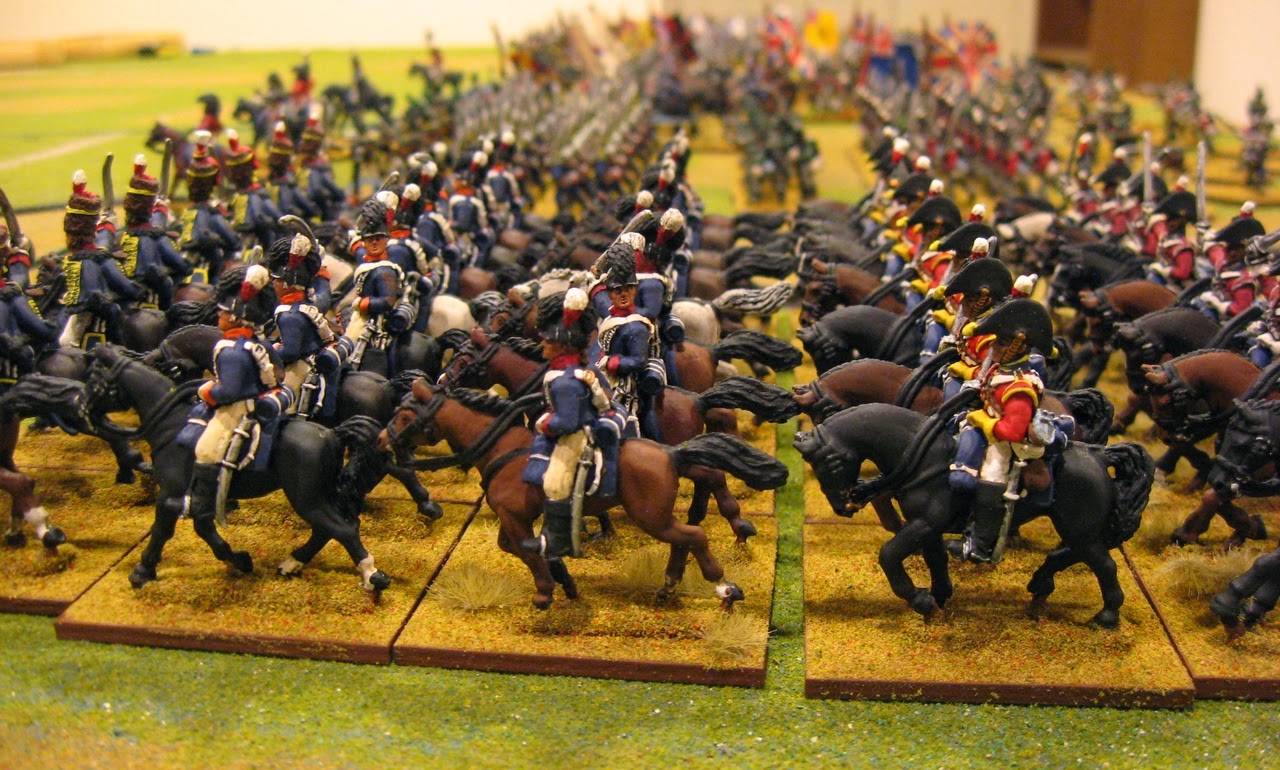 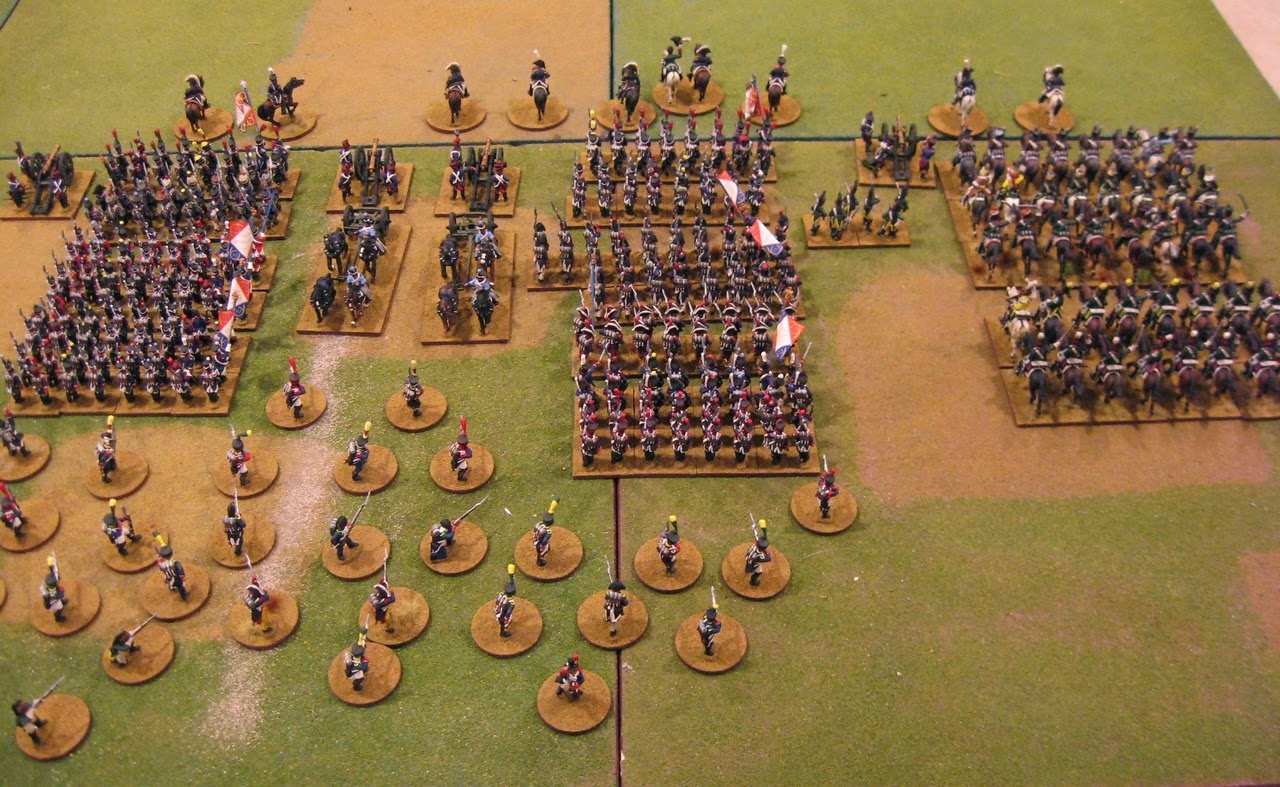 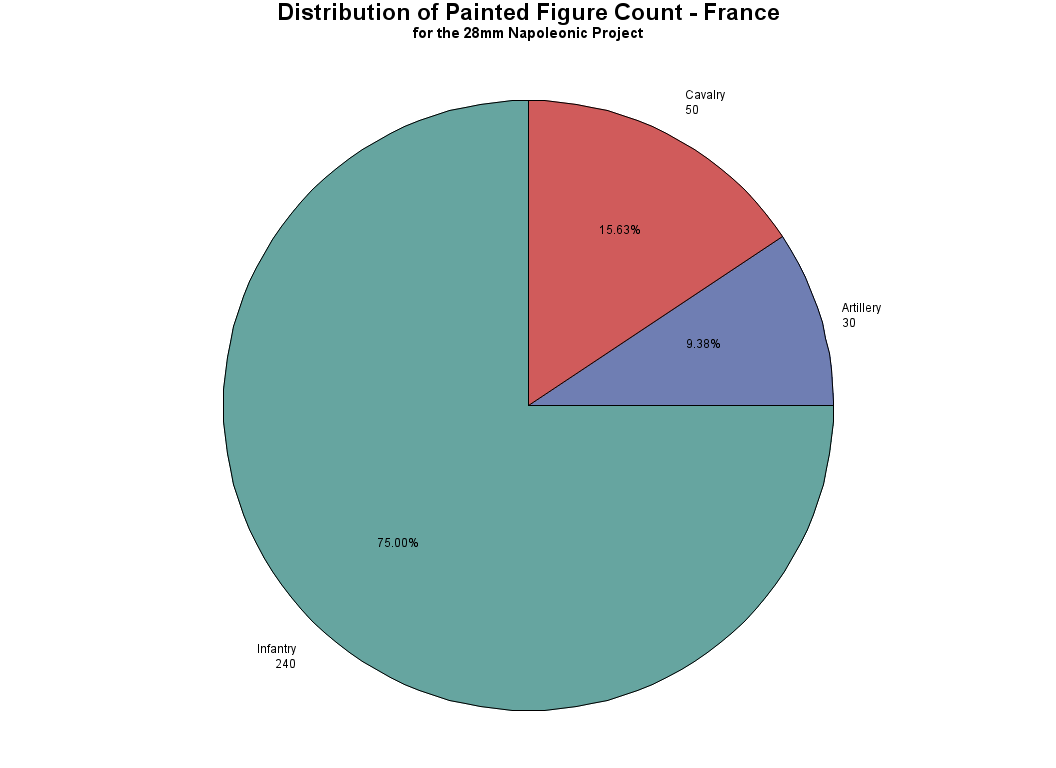 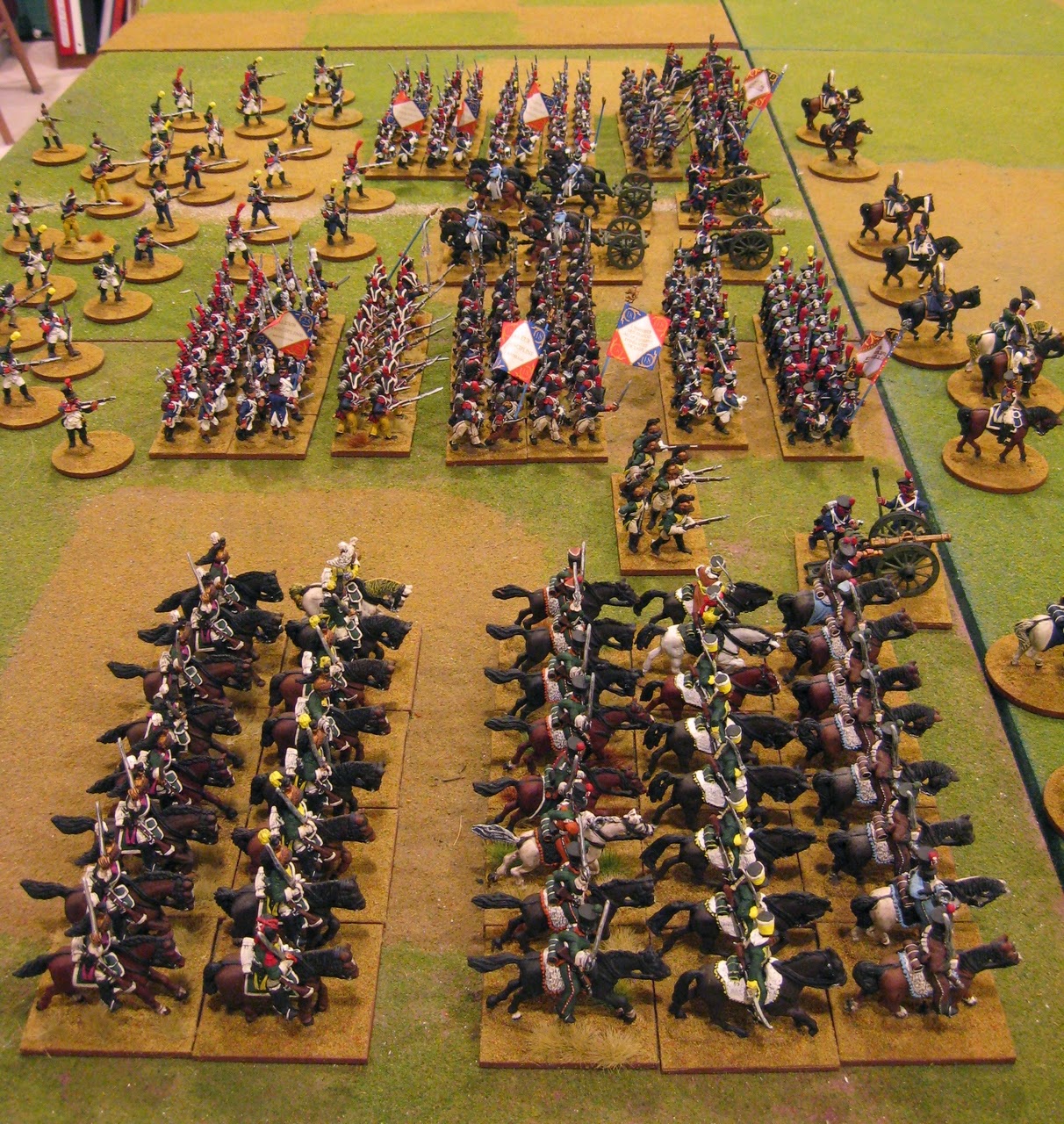 What about the unpainted Napoleonic lead I mentioned at the top of the post? Well, here it is.  Two trays of unpainted lead.  Mostly Front Rank but other makes are in there too.  This alone would keep me busy for quite awhile. 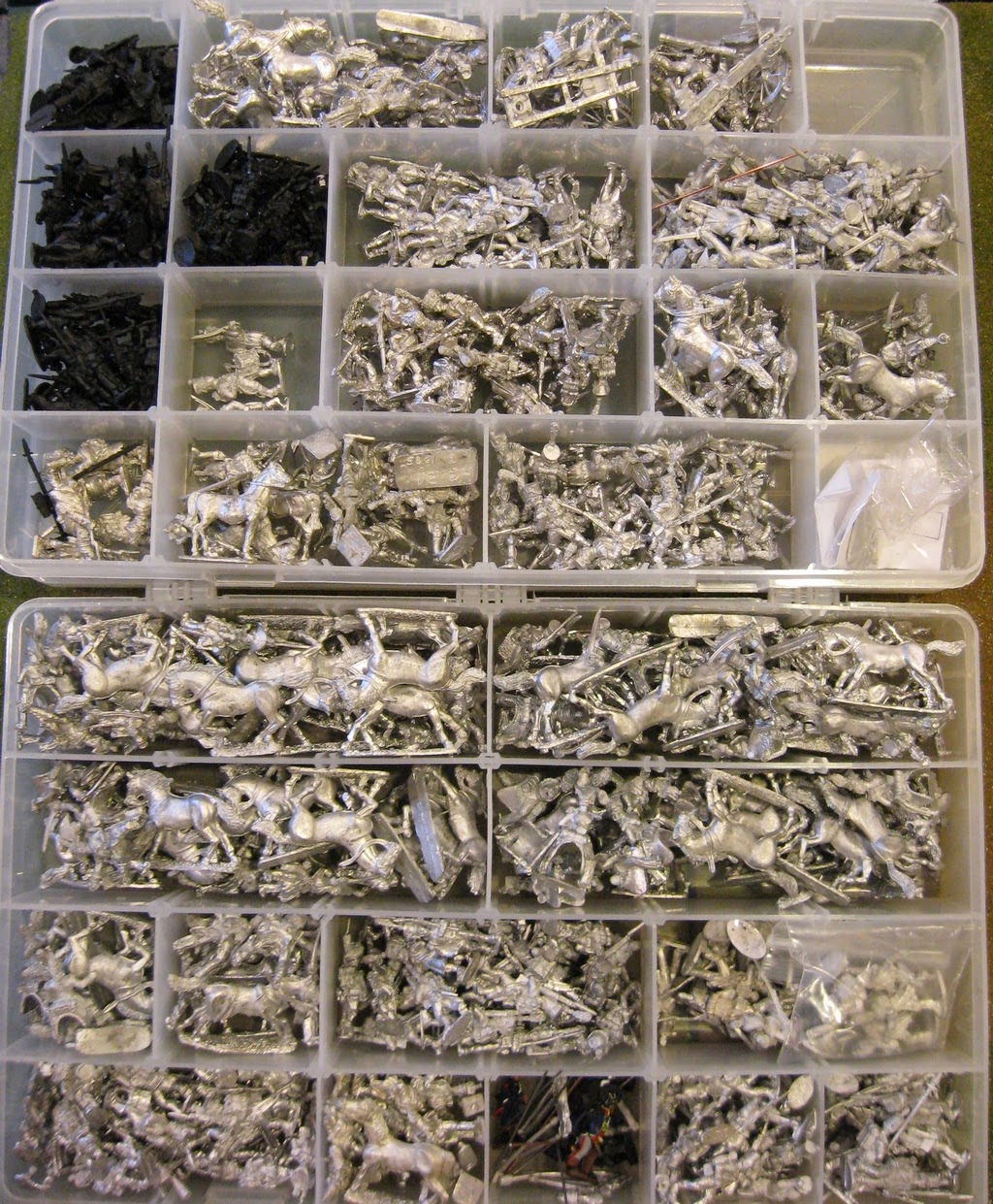 Today's snapshots of the painting desk show, not surprisingly, a bit of variety.

One project seeing some attention is the 15mm 1859 Risorgimento project.  In work are two, 12 figure Sardinian grenadier battalions from Lancashire Games and three Austrian limbers and teams from Freikorps 15s.
Also on the desk are eight, Front Rank British hussars for the Peninsular War project.  Once I get a little further along with the horses, I will need to pick the regiment to field.
Finally, a second group of 15 Old Glory U.S. infantry for the Spanish-American War project await the brush.  The Americans for the SAW project are a great diversion in between painting the more complex uniforms for either SYW or Napoleonics.  Switching between scales and projects is an excellent deterrent to brush burn-out.

I was pondering the notion of having 2015 as the year of painting more than purchased.  Thankfully, that was not a New Years' resolution.  Clearly, I am already behind the eight ball.  I need some restraint...

Email ThisBlogThis!Share to TwitterShare to FacebookShare to Pinterest
Labels: State of the Painting Desk

As a first time participant in Ian's Secret Santa exchange, I was delighted to receive a battalion's worth of Prussian musketeers and two squadron equivalents of Prussian dragoons from my Secret Santa.  What I received is shown below:
Great stuff, eh?  Not only did my Secret Santa choose a suitable period but also made the effort to divine the proper proportions in which I field each unit.  Outstanding effort!  That thoughtfulness is much appreciated.

As a small token of my gratitude to my benefactor, the 12 gift dragoons parade off from the painting desk not yet a month out from Christmas.  These two squadrons will form up with two sibling squadrons to bring Dragoon Regiment #1 up to four squadrons. 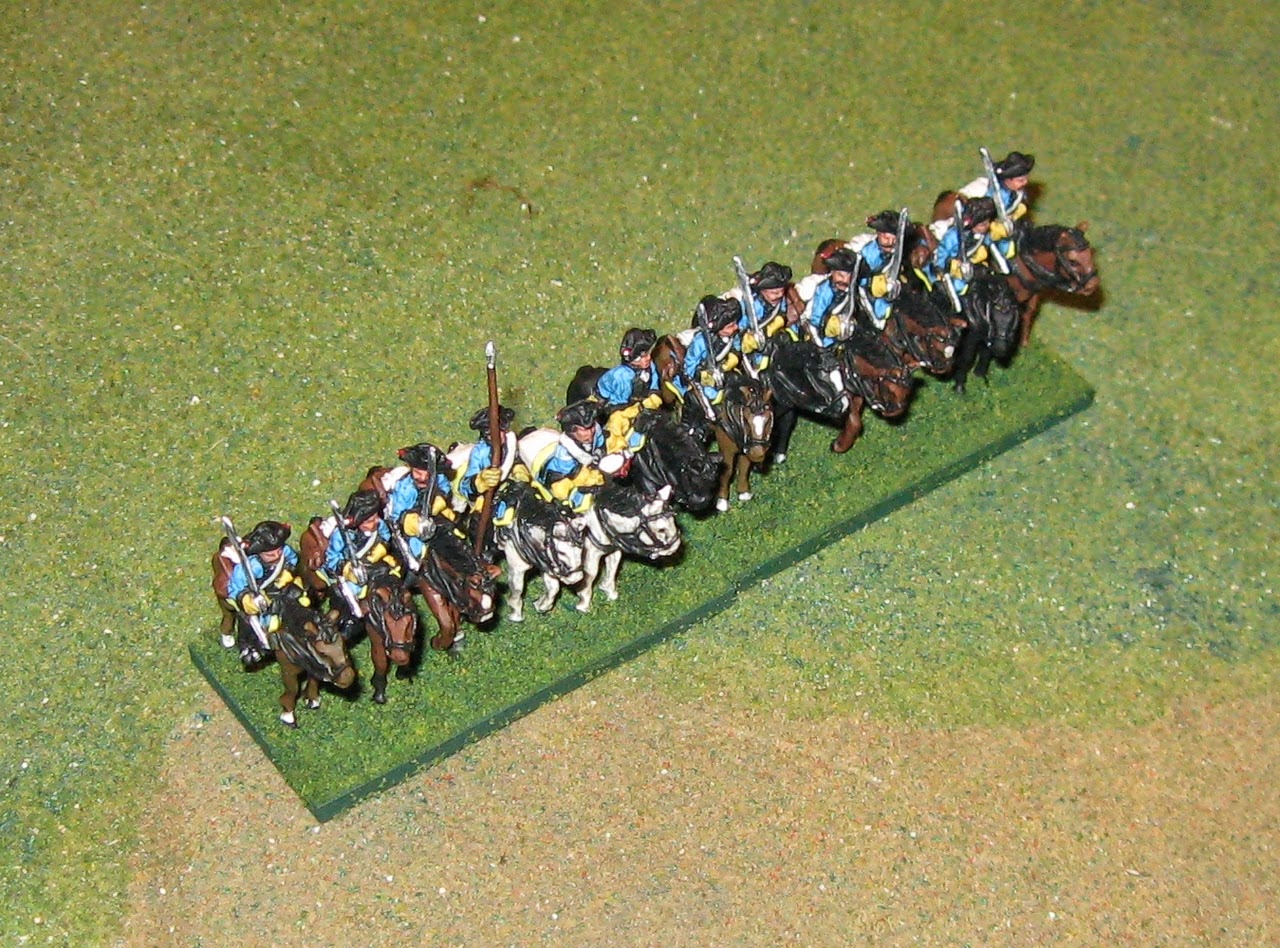 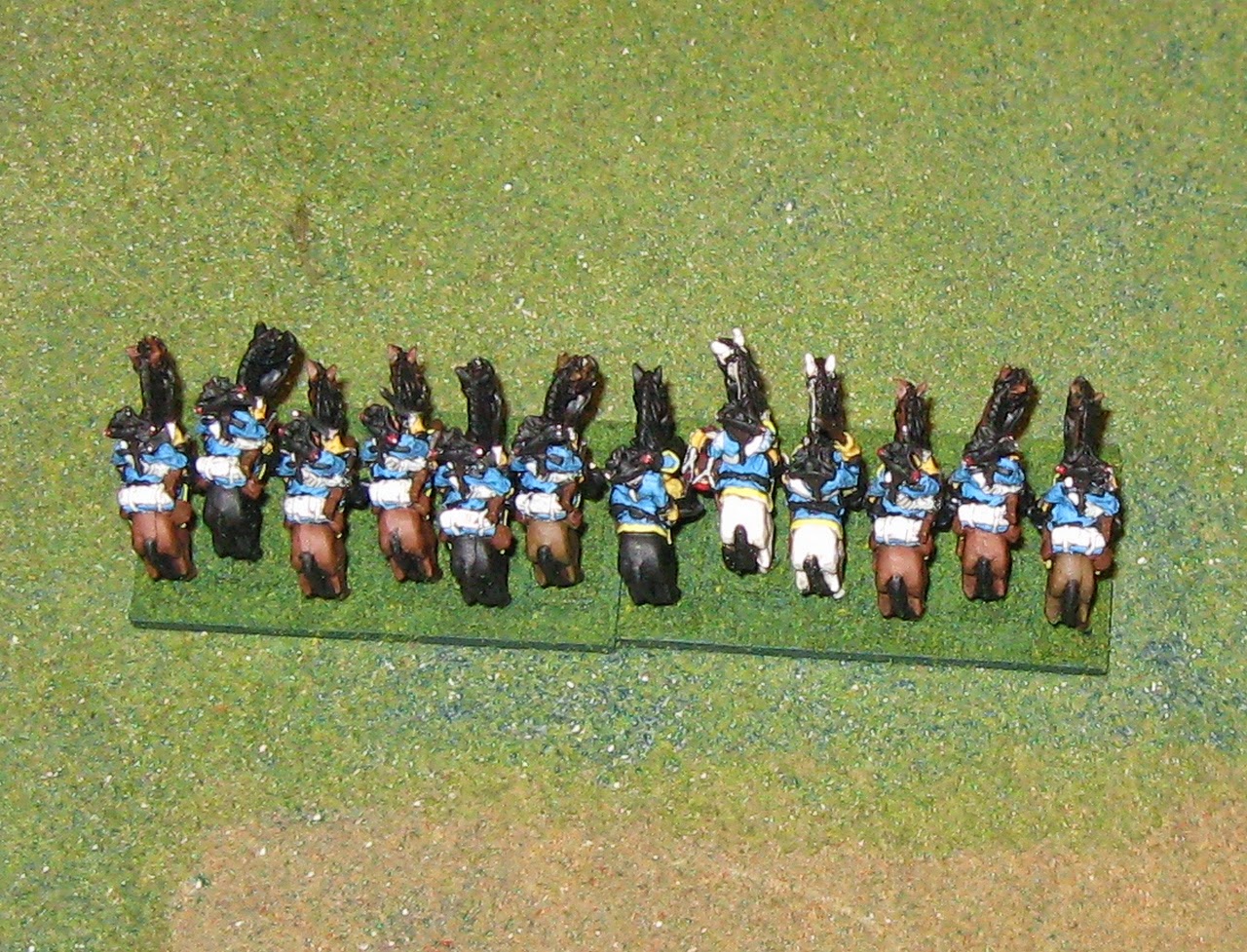 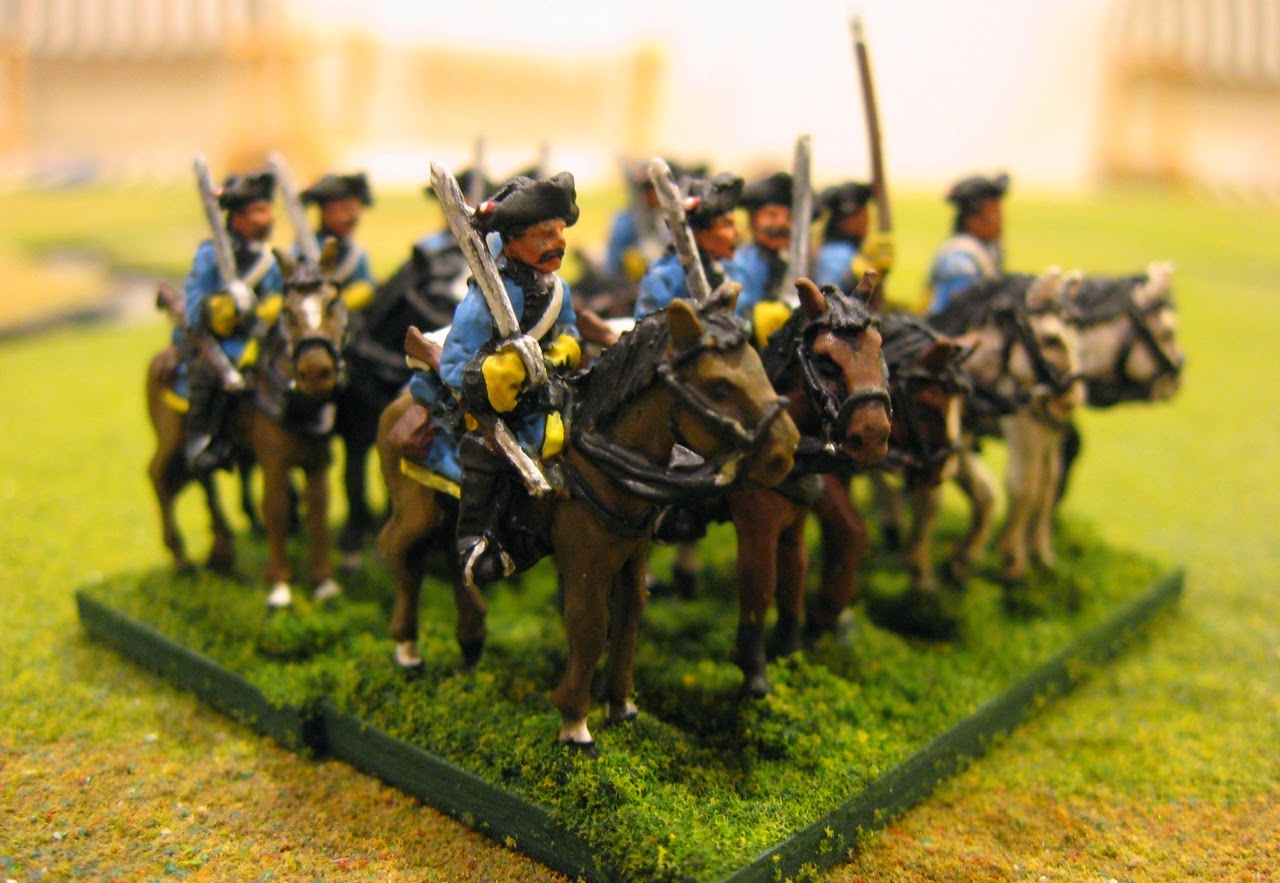 Thank you, Secret Santa!
Posted by Jonathan Freitag at 8:04 AM 22 comments: