My French Intervention in Mexico collection is gone! I made Kevin an offer he couldn't refuse and now he is the proud owner of the collection. As a consolation, I still maintain visitation privileges and perhaps, will see them on Kevin's gaming table occasionally.


I picked up a neat terrain piece from eBay this week. I usually build my own terrain items but this one caught my eye. The piece is a two foot escarpment or cliff which will work well with various scales of figures. Two shots of the piece are included below.

10mm ACW Project:
The Musket Miniatures' fences have been assembled, based and painted. Excluding a few left over sections to later use as corners and gates, I was able to produce 60 linear inches of ACW snake-rail fence. Although gluing the fences together was a bit tedious, the resulting product turned out nicely. I mounted four fence sections onto a 3" x 1" painted and flocked strip of balsa.

15mm Second War of Italian Independence Project:
Kevin asked me about rules I plan to use for this period. I really couldn't provide a definitive answer. There are a number of rules that I have examined and many of these have bits that I favor.
As often happens, I may take ideas from all of them and write my own. Some rules considered include 1859, Fields of Honor, and Fire and Fury variants. With each base representing one battalion, both Fields of Honor and F&F would require modifications to comply with my desired basing scheme. 1859 has one battalion per base but my base size is variable based on actual battalion strength while 1859 puts all combatants on the same frontage regardless of actual battalion strength. Also, 1859 infantry bases have at most 8x15mm figures in double rank while my French and Sardinian line infantry are based 12 figures per base. Austrian line battalions field 18 figures per battalion. This figure ratio works out to about 50:1 man-to-figure.

My original attempt at creating Piedmontese flags was based on the flag without the crown. Seeing more period paintings and illustrations showing the flag with the crown prompted me to recreate the flags. The original flag is on top with the new flag below. All of the 'old' flags have been removed from existing infantry battalions and have been replaced with the new, crown design.

Progress on adding painted units to the project continues. Recently completed figures include 18 Bersaglieri, 12 Austrian hussars, and 4 Austrian mounted commanders. All figures are Mirliton. Two battalions of Austrian infantry are just now moving off the painting table. These two Austrian line battalions have exhausted my stock of Old Glory Austrian line. I'll need to place an order to replenish these figures. Likely to be included in an order from 19th Century will be a few bags of French. I haven't painted any of the Old Glory French so it is about time to field a few French units on the battlefield. 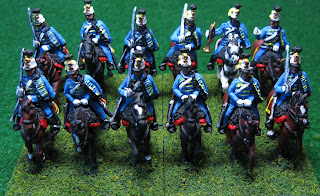 Posted by Jonathan Freitag at 7:12 AM No comments:

My excess 15mm unpainted AWI figures are being purged. Hal Thinglum (past editor of my favorite, now-defunct, wargaming magazine MWAN) has agreed to purchase my surplus stock of Frontier and Jeff Valent figures. Since I consider this project finished (famous last words, right?), I decided to respond to Hal's call for Frontier figures. Not only is he picking up the Frontier figures but I also talked him into taking the Jeff Valent figures too.

This weekend's activities will include a FoG game at Terry's on Friday and the Spokane IPMS on Saturday. Terry is wanting to playtest a FoG scenario in preparation for Enfilade! at month's end. Haven't played FoG in a very long time so this will be a relearning experience for me. On Saturday, I plan to attend the model show for a quick viewing and hopefully meet up with some friends. I know Scott, Scott, and Don will be displaying models so I will get a chance to see their work. Perhaps, we can get together for lunch?

15mm Second War of Italian Independence Project:
Four battalions of Italian infantry and four commanders were completed in April. On the painting table are 18 Mirliton Bersaglieri and 12 Mirliton hussars. The Mirliton figures are really nicely sculpted with the hussars being exceptional. While I have been buying Mirliton from CGM in Spain, I finally found a USA stockist. The US stockist has only recently begun business. In fact, I am his first order. I was able to decrease the total price of the order by mitigating the high price of foreign shipping.

28mm Napoleonic Project:
Up to now, only one of my French battalions has carried a flag (2nd Legere Bn 1). The other six battalions have all been sans drapeaux. Using the flags from www.drapeaux.org as a template, I created flags for these six battalions. Printed on photo paper, these flags compare favorably to GMB Flags with respect to impact. 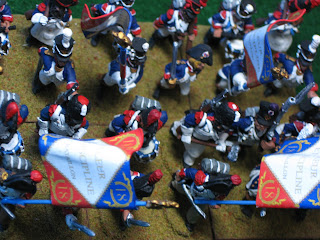 Posted by Jonathan Freitag at 8:13 AM No comments:

In the last month, the group gamed Regimental Fire and Fury twice. One game used the OB from Cedar Mountain and my 10mm figures; the other recreated the Confederate attack on Sherman on the first day of Shiloh.

In the Cedar Mountain game, the Union was victorious, in part, due to an aggressive forward defense of the heights and an unrelenting artillery bombardment. The attacking Confederates reached their heavy casualties level before assaults on the high ground could begin. Casualties were one-sided with the Rebs suffering 40 stand losses to the Federals losing 16 stands.

Painting Totals for April:Painting output increased in April with projects focusing on ACW, 1859, SYW, and Napoleonics.

Posted by Jonathan Freitag at 8:40 AM No comments:

6mm Ancients (2nd Punic War):
My rekindled interest in ancients has been brought about mainly from recent playings of CC:A. Also helping to fan this interest has been the exchange of a good quantity of Romans. Received a package from Baccus last week containing an assortment of Roman and Carthaginian figures from the resculpted range. The retooling of the range has witnessed a great step forward in quality. These latest figures are really little gems and make some of the earlier sculpts I have quite poor. Word from Jake is that he has completed the Punic War project that I bartered for my 15mm Medievals. The new reinforcements will consist of:

Once I sort all of the elements and account for what I currently have and what is in the pipeline, it will be interesting to see the size/composition of the two combatants' forces. It appears I will end up with a large force of Numidian cavalry and irregular foot. I'll await receipt to see how these irregulars are manufactured (in abreast strips or in column strips). Jake is still interested in bartering my 28mm painted SpanAm War Spanish for more 6mm figures and painting. From memory, I have about 120 infantry and a few guns with crew with which to trade.

Basing of the Romans is complete as is the rebasing of the Carthaginian contingents. With only a few unused bases remaining, another order to Litko is needed. Thirty-two Triarii have been primed and awaiting in queue behind the 28mm French battalion.

Not 6mm related, but I ordered a sample of 28mm figures from Aventine Miniatures that also arrived last week. Wow! These figures are gorgeous.

28mm Napoleonic Project:
Progress is being made on the Brigade Games' French but activity has slowed as I base the 6mm Punic Wars collection.

April 2011 Painting Totals:
April witnessed the first month in 2011 where my output exceeded 100 figures. All figures for the Albuera battle are in place and ready for action.

Posted by Jonathan Freitag at 7:28 AM No comments: