The painting motivation has been largely absent since returning from vacation.  In fact, I only made it down into the game room on one occasion during the work week.  With a bit of time this weekend, I managed to push a couple of units off the painting table. 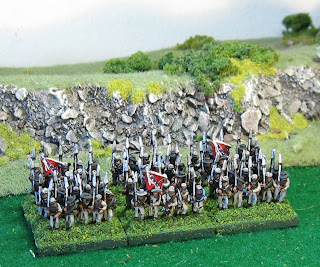 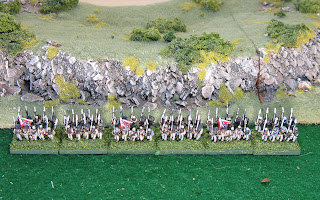 Next up are two squadrons of SYW Prussian hussars from the 3rd Hussar Regiment.  Each squadron comprises six figures on two stands.  While other cavalry from this project are mounted on 30mm deep bases, the Eureka Prussian and Austrian hussars must be mounted on 40mm deep bases to accommodate the size of the figure.  The dragoons and cuirassiers are sculpted in standing poses and maintain a much smaller footprint than their lighter brethren.  Eureka's Prussian/Austrian hussars not only have a larger footprint than the heavies due to the galloping pose but the figures are larger too.

I picked up some Eureka French and Russian hussars that fit into the 30mm deep footprint of the heavier cavalry that will likely see service under both Prussia and Austria.  My historical justification for mounting the light cavalry on a deeper stand is that the hussars would have operated in a more loose formation and the unit's deployment area would necessarily require additional depth. 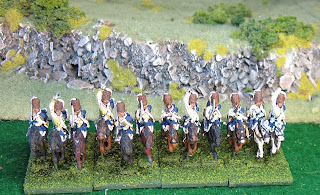 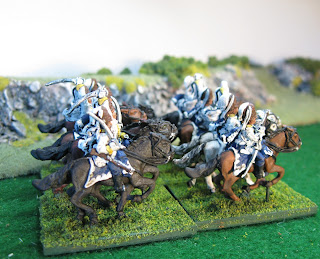 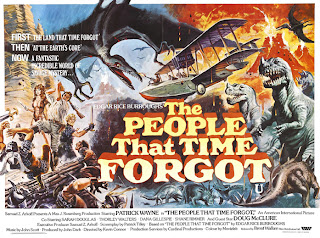 No, Old School wargamers are not forgotten.
Reading Steve-the-Wargamer's recent post regarding Old School wargaming (http://steve-the-wargamer.blogspot.com/2013/02/definition-of-old-school.html#comment-form) got me pondering how I would define Old School wargaming.  JJ's Wargames (http://jjwargames.blogspot.com/) follows up with a general agreement to Steve's definition.  While Steve proposed a number of reasonable parameters for qualifying what is and isn't Old School, the notion of actually laying down a rigid and defensible definition may prove quite elusive.  What is my position on Old School wargaming?  How will I know unless I write it down!

First, a distinction between “classic” or “vintage” and “Old School” should be made.  Is Old School necessarily old fashioned as implied by the terms “classic” and “vintage?” Although not explicitly qualifying his position, Steve-the-Wargamer implicitly makes this distinction. Vintage wargaming could be classified as using old figures, old rules, old terrain, and perhaps, even old guys.  In contrast “Old School” could be classified in the camp of “the game's the thing” over all else.  That is, the game is a conduit for channeling like-minded individuals for the purpose of a friendly and enjoyable activity.

For me, defining Old School wargaming is quite slippery.  Old School can have different meanings to different people and, like much, is often in the eyes of the beholder. Perception could also be distorted by age since each generation may hold its own backward looking view of what comprises Old School.  Since I have been gaming for over 40 years, my generational notions of Old School are likely very different from someone a generation (or two) younger (or older!).  To paraphrase former US Supreme Court Justice, Potter Stewart, I know Old School wargaming when I see it.  To complicate matters even more, history is how I remember it. 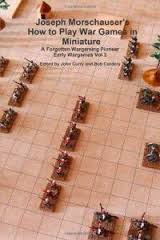 When I think of Old School wargaming, I envision the pioneers of Morschauser, Wesencraft, Grant, and Featherstone hovering over the gaming table.  For the newer generation, I pin Old School wargamer award onto Ross Macfarlane (http://gameofmonth.blogspot.com/).  Old School wargamers will not quickly dismiss time-tested rules to be replaced by the latest, fashionable rules.  Perhaps this reluctance to change is due more on the “old” adjective rather than on “school?”  For rules, complexity is decidedly in the “Beer and Pretzels” classification with an objective more towards pushing toy soldiers across the game table than attempting to reproduce a military simulation.  Old School could include vintage gaming but it is not a requirement. Camaraderie, fellowship, and gentlemanly behavior are not confined to Old School gaming alone.  These traits are a requisite for any group game in which I participate.

Am I an Old School wargamer?  Perhaps it is too soon to tell...
Posted by Jonathan Freitag at 3:14 PM 2 comments:

Reading Cozzen's Shenandoah 1862 reminded me of the rush through the Valley on my 2010 ACW battlefield barnstorming trip.  One of the stops during the 13-battle tour was in Port Republic.  Actually, the battlefield walk consisted of only a single stop and that was at the location of the 'Coaling' (coal hearth on the game map below from SPI's Jackson at the Crossroads) opposite 'Lewiston' or the Lewis mansion.  Much of the battlefield today is in private hands.

From the road looking up the hill, is the 'Coaling' as seen today.  The house at the top of the hill was built in 1886 by a member of the Lewis family and is clearly seen in the old photo of the Coaling in the placard below.

Federal guns of Clark and Robinson were deployed at the top of the hill and had a commanding view of the valley floor.  It was up this slope that Wheat's Louisianans under Taylor attacked out of the woods towards the Federal guns and the 66 Ohio.
The 'Coaling' anchored the Federal left with Tyler and Carroll deployed across the valley along today's Rt 708 to the South Fork of the Shenandoah. In the distance can be seen the building tops of Port Republic. The site of the Lewis mansion is in the middle ground.
Although the ground appears flat in the photo above, it is quite undulating and would have offered some protection to the combatants against long range artillery fire.  The photo below illustrates the ground undulations looking towards the Lewis mansion from the church. 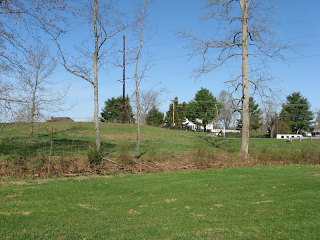 Today, there is a small church at the base of the Coaling which doesn't appear on period maps.  Perhaps this building was added after the war?

Reading Cozzen's account of the battle has piqued my interest to follow up with a more detailed accounting.  Having enjoyed Krick's work on Cedar Mountain, I'll give his Conquering the Valley a go.  After that, perhaps, a replay of Port Republic on the tabletop will be in order.  A quick glance at Conquering the Valley reveals that only casualty returns are listed.  No troop strengths for the battle, itself.  For troop strengths, I will have to rely on the game, Jackson at the Crossroads unless another source turns up. 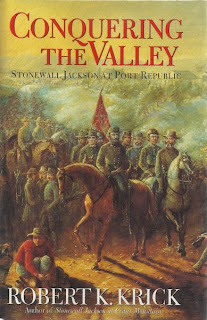 While I finished these guns before leaving on holiday, only now did I have time to snap a couple of photos.  With this update, the SYW project adds eight guns to the artillery reserve; four guns for each combatant.  Total guns thus far stand at 22, bifurcated evenly between Austria and Prussia.  These eight guns were the last artillery and crew in inventory. All models are from Eureka's 18mm line of figures.
I applied the Minwax treatment to each gun and crew before dullcoating.  To maintain consistency with the other guns, I pulled the already completed guns from their holding boxes and applied the Minwax treatment to them as well.

Next up for this project are two squadrons of Prussian hussars.  Still in the painting queue with primer are Prussian jaegers and Austrian grenz in skirmishing poses.
Posted by Jonathan Freitag at 5:17 PM 2 comments:

Updates have been missing due to my absence from the continent.  You see, to break up winter and escape the cold weather for a brief time, I jetted off to Hawaii for a relaxing nine day sabbatical.

My basic routine quickly became cycling each morning followed by snorkeling and sight seeing broken up with bouts of eating and reading.  On one afternoon snorkel, I had a close encounter with a green sea turtle.  I followed the massive beast for about 10 minutes while it glided along the reef.  What fun!  Too bad I didn't have an underwater camera with me.

Oahu has a number of excellent food trucks and many of our meals were taken therein.  One such stop was the Shrimp Shack near our home base of Punalu'u.  Coconut shrimp was excellent. 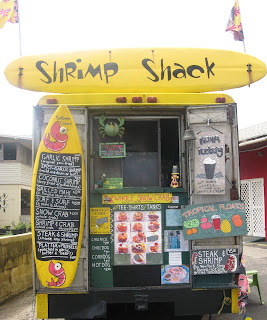 Best shave ice was in Haleiwa at Matsumoto's.  These treats were large, luscious, and quite inexpensive.  Every time we visited, there was a line out the door.  Great with vanilla ice cream! 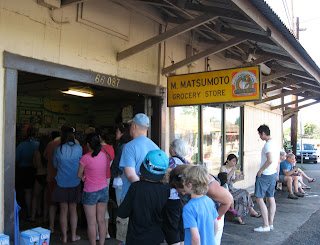 One afternoon we spent wandering Waikiki and hiking to the top of Diamond Head.  Waikiki was not too crowded and the views from Diamond Head were spectacular. 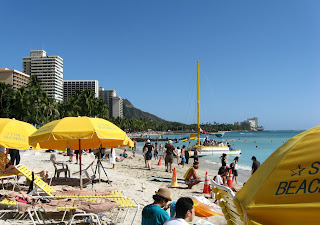 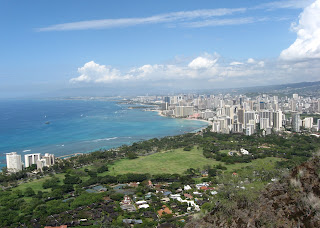 Email ThisBlogThis!Share to TwitterShare to FacebookShare to Pinterest
Labels: Travel

Five of us gathered at Terry's on Sunday to refight the right flank of Pea Ridge around Elkhorn Tavern.  The left portion of the Pea Ridge battle (Leetown) was fought the week prior.  For Elkhorn Tavern, Kevin and John commanded the Federals while Kim and I commanded the Confederates. Rules used were Regimental Fire and Fury.

The Federal lines stretched across the table on the high ground with Dodge holding the right astride Telegraph Road with Elkhorn Tavern in his rear.  Vandever held the Federal left.  With interior lines and the Federal center dominated by artillery, the tabletop battle broke down into two distinct battles with neither Confederate commander (Price and Van Dorn) aiding the other.

On the Federal left, Van Dorn maneuvered his forces into position and then launched wave assaults against the Federal defenders in an attempt to pin and outflank Vandever. 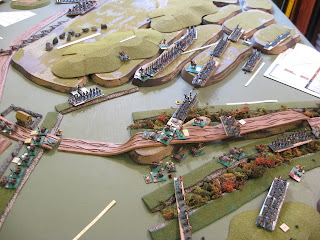 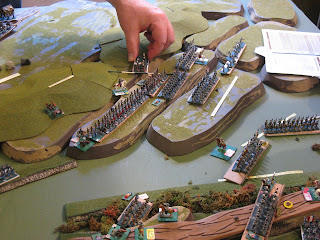 As the left of Vandever's line gives way and Van Dorn's attacks show little loss of momentum, Vandever withdraws in an attempt to save his flank. 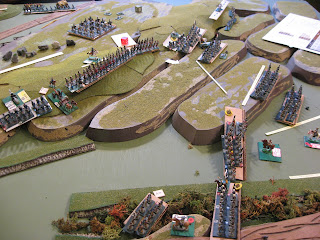 With the Federal left falling back, Vandever orders the cavalry to charge in an attempt to thwart the confederate attack. 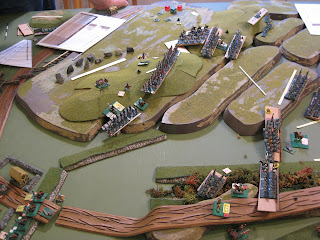 Most Federal saddles are emptied as the cavalry charge home.  Cavalry suffer nearly 80% casualties and break towards the rear. 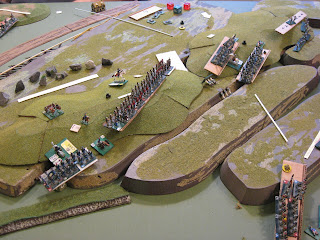 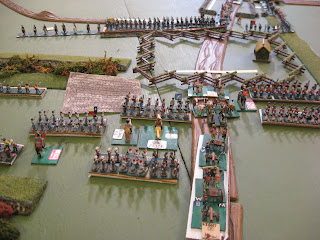 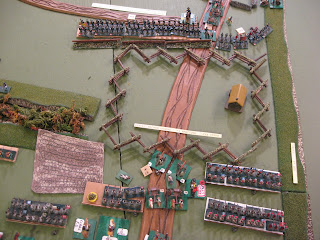 To cut down casualties and allow time for the Confederate guns to deploy, militia deploy into extended line across the road. 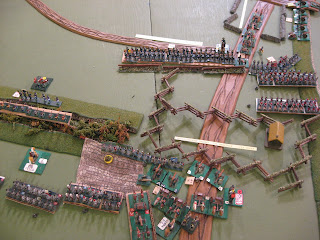 With six gun sections deployed on the road, Price launches an assault on Federal positions with support from the artillery.  Union cavalry are pushed back from the ravine. 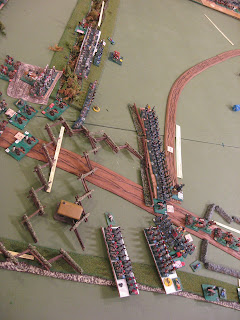 Price drives back both flanks while avoiding Dodge's large force protected by the breastworks. 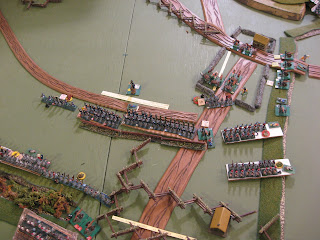 Even with success against both of Dodge's flanks, the militia cannot sustain their effort and are quickly worn and then spent.  Failing their maneuver roll, the militia retreat in confusion.  Having dispersed Federal cavalry, Price's left presses on to envelop Dodge.

With both Federal flanks compromised, heavy casualty level reached, and Price's guns wearing down the Federals hunkered down behind the breastworks, the Union commander has no choice but to fall back and quit the field.  Thus the game ends in a Confederate victory.

Posted by Jonathan Freitag at 6:25 AM 6 comments:

With the push to field British for the recent 28mm AWI game, little progress was seen on other projects.  Now with bulk of the British and Germans fielded, attention can return to smaller painting tasks.  Soon to be fielded are a smattering of units from a number of projects.  Before heading off to Terry's Sunday game, I have just enough time to share a photo of the first such unit completed.

First off the painting table is a dismounted samurai unit and a foot leader stand.  All figures are from Peter Pig and, again, the figure quality is excellent.  Keeping the theme started with the mounted samurai, I opted for a splash of color in the banners.  Each foot samurai sports a distinct sashimono that adds much variety to the unit. 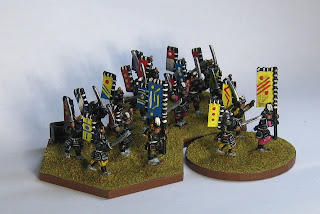 Having completed these samurai, the only unpainted figures for this project are a couple of leader packs.  Each leader pack contains one mounted samurai and three foot attendants.  It should be a quick task to paint two more command stands from these packs. I need to place an order with Brookhurst Hobbies for a restock.

Marching down the painting production line in various stages of completion are 18mm SYW guns (four each for Austria and Prussia), two squadrons of Prussian hussars, and one regiment of 10mm confederates (60 figures).
Posted by Jonathan Freitag at 9:03 AM No comments: