I haven't been active in miniature gaming but I did spark an interest in Command and Colors: Ancients with both Paul and my son-in-law, Nick. Nick saw the game set up on the dining room table after a session in which I introduced Paul to the system. Paul enjoyed the game very much and is looking forward to more games when he is in town. Nick, likewise, really enjoyed the game and has asked for another session Friday evening. In our first session, Nick beat me three times in Cannae. We'll see if I can turn the table on Friday.

Scott has a General de Brigade game slated for Saturday at his house in Couer d'Alene. Tentatively, the plan is to have a French vs Austrian match-up. It will be interesting to see what scenario Scott cooks up and enjoyable to face Scott and Kevin on the field of battle.

18mm SYW Project:
A small Eureka order was placed with Scott to bring in a few additional SYW figures. I wanted to take a look at the new French hussars in mirliton as well as the Russian cossacks. The French hussars are much better posed than ether the Austrians or Prussians. Recently completed was the second battalion of IR#36, Browne. On the painting table are two squadrons (12 figures total) of Prussian dragoons.

18mm Napoleonic Project:
Two units of Campaign Game Miniatures' French in campaign dress are finished. Nice figures that paint up very quickly. Like the Austrians painted earlier, the French are in the larger, chunkier style. 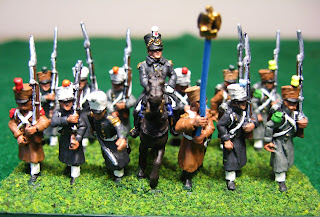 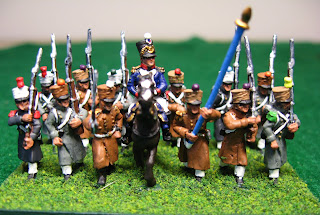 10mm ACW Project:
Rebasing of the infantry has begun. Unfortunately, I ran out of bases and have had to make two additional orders to Litko in a futile attempt to keep up with my conversion activity. Currently, I am about 75% complete on the infantry rebasing but have ground to a halt awaiting the next Litko resupply. Since one infantry stand under the old basing scheme contained one command strip and three rank and file strips, I will end up with two stands under the new scheme. The result is that I will have one stand with command for every rank and file stand.

15mm Second War of Italian Independence Project:
Four squadrons of Sardinian light horse have passed across the painting table. These four squadrons represent the Novarra regiment and all are armed with lances. Also included is a snapshot of Bersaglieri. The figures are Mirliton. 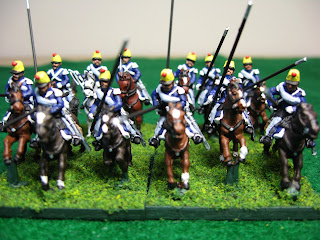 Posted by Jonathan Freitag at 12:41 PM No comments:


Posted by Jonathan Freitag at 12:58 PM No comments: