This Cedar Mountain game was fought in mid-2010 using Republic rules and 10mm figures.  While a brief AAR was posted soon after the game, I never posted accompanying photos.  Well, two years later, here are some photos.

The Cedar Mountain game on Sunday resulted in a (surprising to me, at least) Union victory. Although Scott, as Banks, lost half of Crawford's brigade to Confederate artillery on the approach to the Wheatfield, the remainder of Williams' division pushed Winder back from the Wheatfield with Ronald and Garnett retiring nearly one mile to the west. In the center, Banks' batteries dealt death onto Early and Taliaferro. Even in the south, the Federal battery hugging Hudson House inflicted huge casualties upon Ewell before being overrun. A.P. Hill arrived along the Culpeper Road and pushed his brigades into the fight in a piecemal fashion in an attempt to stabilize the situation. At one point, three Confederate divisions had panicked. With the arrival of darkness came Ricketts, and the game was halted with a Federal tactical victory. 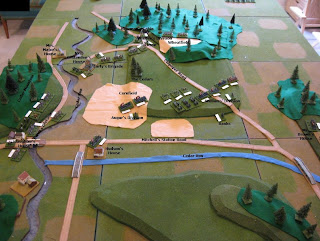 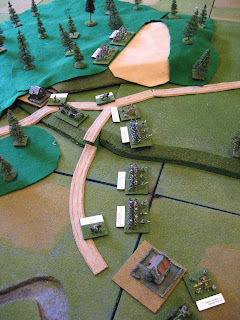 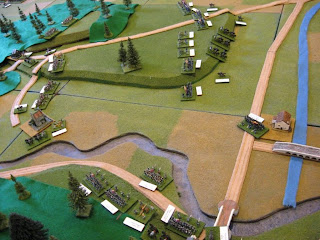 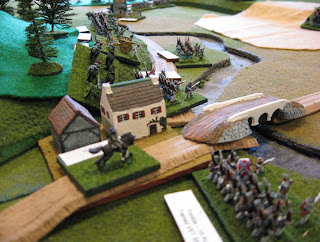 September showed a low figure count with respect to figures completed.  If not for the 48 6mm light bow completed in the last week, total count would have been under 30.  With a little luck, OCT counts will show improvement.

On the painting table are nine 28mm Renegade Roman cavalry and a dozen Renegade slingers.  The only progress made in the last week is painting the horse flesh.  Weather on the Palouse has been exceptional and many miles were logged on the bike.


15mm AWI Project:
Below are three group shots of the allied contingents in my 15mm AWI Project.  All figures are Frontier with the exception of one or two command figures from Freikorps.  While the Frontier figures are all single pose, they hold much character and appear quite disciplined in mass. Figures are based with each regiment on one stand.

The Palouse Wargaming Journal has migrated into the blogosphere. While the website provided more control and functionality, a blog seems to provide easier maintenance. I'll give blogging through this medium a try. Currently, all 2012 entries from the website have been converted and migrated into this blog. Conversion is not an easy task but I will convert additional postings as time permits.

28mm Napoleonic Project:
In preparation for Kevin's game on the 23rd, I completed two British units: the 26th Regiment of foot and two squadrons of the 14th Lt Dragoons.

6mm Ancients (Punic Wars) Project:
In my last Command and Colors: Ancients game with Jake, the scenario required one unit of light bow. I didn't have any bow in my collection and had to requisition the bowmen from Jake's collection. Now, that problem has been resolved with the addition of six stands of light bow (48 figures).

Kevin hosted a large Peninsular battle on the 23rd including a large table having custom-made, arid terrain.  Nicely done, Kevin!

The battle began briskly as both combatants pushed their cavalry aggressively on the British right flank.  Around the farmhouse, heavy French skirmishing forced the defenders to fall back from the walls allowing the French to make a breach.  Before the British could counterattack, French legere pushed the British completely out of the compound.

Returning to the cavalry battle, outnumbering the British 17 squadrons to 12, French horse gradually gained the upper hand and sent the British horse streaming from the battlefield. With the collapse of the British right and pressure mounting across the battlefield,  British commander ordered a general withdrawal.

Victory to the French!

Posted by Jonathan Freitag at 1:45 PM No comments:

I drove down to Moscow on Saturday for cycling and a CCA game with Jake.

Battle of Beneventum ended with a 7-4 Roman victory.

28mm Napoleonic Project:
In preparation for Kevin's Napoleonic game on the 23rd, I committed to painting two squadrons of British light dragoons. I also managed to complete one more British line battalion in time for the game. Well, not quite completed since I still have to dip and base the figures but will be completed by Sunday. Also nearing completion are 10 dismounted dragoons.
Posted by Jonathan Freitag at 7:26 AM No comments:

Two more games from the GBACW series arrived in Wednesday's post. Now I can add Pleasant Hill (S&T 106) and The Horse Soldiers (S&T 119) to the growing collection. Both games are unpunched and in mint condition. I also found a second copy of Stonewall (S&T 67) in unpunched condition at a bargain price that will be arriving shortly.
Getting back to ACW, boardgames, and miniatures, one of the mechanisms that I favor from the GBACW that I want to port over to RFF is Brigade Combat Effectiveness (BCE). With this rule, a brigadier can only push his formation so hard before it begins losing cohesion, effectiveness, and the ability to conduct offensive actions. BCE is governed solely upon casualties; the levels of which are computed as number of stands remaining.

By adding BCE, generals are encouraged to fight a balanced battle with no, one brigade taking the brunt of the punishment. If done, that brigade will quickly lose offense capability. Rotating brigades in and out of 'hot' combat zones helps to prevent any one brigade from sustaining crippling casualties. While RFF does have Regimental Combat Effectiveness (RCE) in the Effectiveness Levels of Fresh, Worn, and Spent, there is no such mechanism at the brigade level. Of course, RFF's Heavy Casualties level does affect performance at the army level.
How will BCE levels be computed? My thought is to sum all of the Fresh, Worn, and Spent values within each brigade to arrive at the equivalent BCE. Using the RFF OB from a Cedar Mountain scenario, Gordon's Brigade is given as,

Summing over all Fresh levels yields 50 stands at maximum effectiveness (SE). When the brigade falls to 37 stands, the BCE drops to CE. Finally, when the brigade has only 24 stands remaining, BCE drops to LCE. the effects for a brigade being at SE is that the brigadier has a +1 DRM to rolls the Maneuver Table. Brigades at CE operate as they normally do. Brigades that have Lost Combat Effectiveness (LCE) have a -1 DRM to rolls on the Maneuver Table, may not initiate assault, and may not voluntarily move into small arms range of enemy units.

There are other limitations for BCE but these lay a basis for thought. Tracking stand loss for BCE may require too much bookkeeping for some. Since each of my regiments begin the game with three flag bases (one for each effectiveness level) and I use the number of flags remaining on the regiment to denote its current effectiveness, tracking flags per brigade may provide an easy alternative. In the example of Gordon's brigade above, when the brigade loses a total of four flags, the brigade drops to CE. When a total of eight flags have been lost (or when only four flags remain among the brigade), the brigade drops to LCE. I'll try this in my next game.

Now, back to painting...
Posted by Jonathan Freitag at 9:02 AM No comments:

Painting totals for August have been amended to reflect the 24 French figures I forgot to add into the totals. So, August nows includes 2 x 12 figure French battalions for the Second Italian War of Independence. I also missed counting a gun and crew in July.

Also added to the ACW regimental collection was Road to Washington (RtW) by Command Perspectives. RtW is a regimental treatment of Second Manassas which I have been eyeing for more than 30 years after reading a bio of the designer and his designer's notes in an old issue of Fire and Movement. RtW infrequently appears for sale and I snatched up a used copy when I had the chance. RtW appears to be a game ahead of its time and The Gamers' CWB series seems to have its foundation on many of the concepts. My thought is to explore both series for ideas for translating into miniature rules.

28mm Napoleonic Project:
Painting progress on the British line infantry (to be designated the 26th) has been halted to make way for the British light dragoons. The dragoons jumped ahead of the infantry in order to have these troopers available for Kevin's Napoleonic game on 23SEP2012. The Front Rank cavalry will become two squadrons of the 14th Light Dragoons. Painting will resume on the infantry once the cavalry have moved off the painting table.

Arriving into my mailbox this week was an order from Brigade Games. In the package were French dismounted dragoons and French Gendarmerie from Lon's excellent early Napoleonic line. These are some of Paul Hicks' latest figures and they are the best to date. Exquisite detail and superb casting. Photos of these figures can be seen on Brigade Games website (http://www.brigadegames.com/French_c_346.html). In hand, these figures are even better than in the photos. Well done! The dismounted dragoons will become a welcome addition to the collection and I may field the gendarmes as consular guard or grenadiers.

I went back to the mounted command figures and gave each a treatment of the Minwax dip. The problem I am having is that a few selective, spots on a few figures are not being dulled by the topcoat. Repeating the process seems to work on some figures. What is going on? Is it a bad can of dullcote? The last batch of Dullcote I bought has a different label. I wonder if the recipe changed?

Posted by Jonathan Freitag at 10:08 AM No comments: