Some More Celts/Gauls from BTD 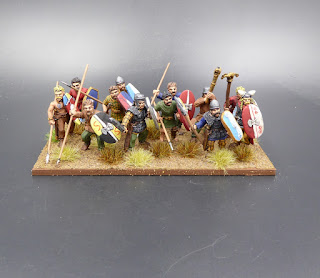 Another batch of BTD Celts works its way off the workbench.  Today, a second dozen warriors ready themselves for battle.  As with the other BTD Celts, a mix of poses, clothing, and weapons imparts a sense of an unruly warband.  Perfect for my image of Celts or Gauls charging into battle. 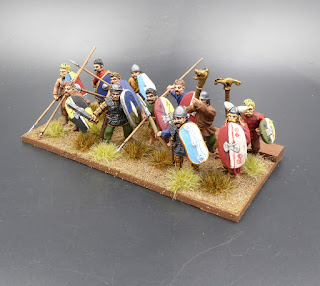 With this arrival, I can now field four Gallic warbands in battle.  Not enough for Telamon but the addition of the three stands of Germans could augment the Telamon army.  Even with the Germans taking to the field, more recruits are needed.  Back to the painting desk to work in a few more Celtic warbands from the pile of BTD figures remaining.  A shipment from NorthStar arrived containing more Celtic lead including enough figures for unit of cavalry.  Perhaps enough figures for two or three more stands of warbands too?  We will see exactly would I received in NorthStar's recent Collection sale.  I plan to work in the occasional dozen Celts in between work on other units.  Before long, I may be able to field my own Telamon Gallic army.  First, though, work returns to 18mm Napoleonics for the 1799 project.
Posted by Jonathan Freitag at 12:00 AM 34 comments: 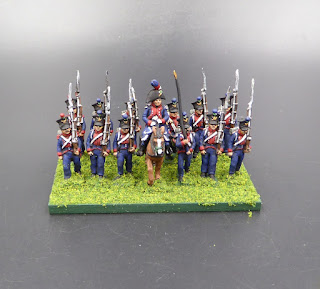 With the Battle of Trebbia as a possible monument for 2019 gaming (see Project Plans 2019),  a battalion of the Polish Legion was pushed into the painting queue.  Thirteen figures comprising this BMU muster out as the 1st battalion of the 1st Polish Legion.  Figures are AB Miniatures.  As expected from AB, the figures are superb with fine detailing.  I found the dark blue uniform with colored labels an easier unit to paint than an equivalent French battalion.  Still need to grant the battalion a flag. 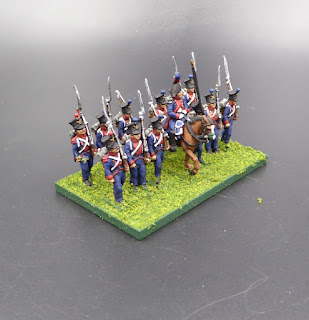 The 1st Polish Legion served in Dabrowski's Division at Trebbia.  Each of the three infantry battalions under Dabrowski were distributed across each of his three brigades.  The 1st Battalion was assigned to Calvin's Brigade.  Dabrowski's division was engaged on the first day of battle (June 17) along with Victor and Rusca at Tidone Creek.  After having passed the Tidone, Dabrowski was attacked vigorously by Bagration.  The Poles were forced to retire back across the Tidone.

The 1st Battalion joins the 2nd Battalion in "Figures Completed" side of the ledger.  To finish off Dabwroski's command, one more Legion infantry battalion is needed in addition to a combined grenadier/chasseur battalion, two squadrons of lancers, and two squadrons of dragoons.
Posted by Jonathan Freitag at 4:00 AM 50 comments:

Some Celts/Gauls from BTD 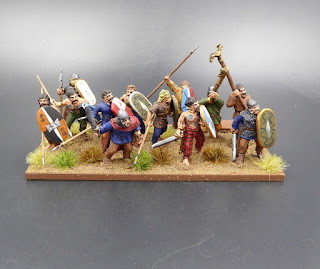 The recent game of Telamon has motivated my painting aspirations back toward the Punic Wars project.  With that new found inspiration, a dozen Celts from Black Tree Design were pushed into the painting  queue.  Strike while the iron is hot, so to speak.  That is exactly what I did.  Off the painting desk today is the first of two such stands suitable for either Impetvs or To the Strongest! 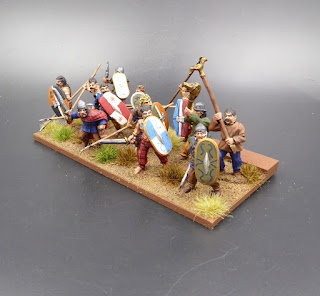 The BTD Celts (or Gauls) have good animation as expected from BTD.  I went with simple painting schemes and simple shield designs.  As can be seen from the photos, a dozen of these figures are tricky to fit onto 120mm x 60mm stand especially when many are wielding long spears.  A good change of pace from recent painting work and provides a slight kickstart return to the Punic War project.  Enough figures remain for four more such Celtic stands of warriors.  A second stand, as mentioned above, is presently in work.  Perhaps if I produce enough Celts/Gauls, I could produce my own Telamon forces.  I would need some Gallic cavalry, though.
Posted by Jonathan Freitag at 12:00 AM 38 comments:

After mustering out four units of British heavy cavalry for the refit and reorg process, attention turns to the French.  This time, two French hussar regiments trot off from the workbench after having added one trooper each and undergoing a rebasing.  Figures are Front Rank.
What remains in this mini-project?  One unit of Vistula Legion lancers remains to be upgraded and rebased as does a French unit of chasseurs a cheval.  The Polish lancer figure is in hand but the chasseur a cheval unit is a Brigade Games' figure from their early Napoleonic range.  I will wait on the chasseur a cheval until I need to place an order from Brigade Games.  I really can see the light at the end of this tunnel!
Posted by Jonathan Freitag at 12:00 AM 40 comments: 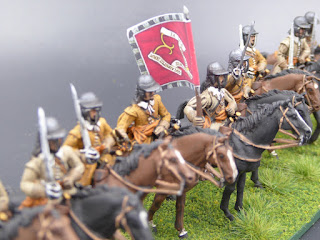 With the recent addition of a regiment of foote (see Aldrich's Regiment of Foote) for the ECW project, motivation remained high to push on to another unit.  Since a number of Empress Miniatures cavalry have lingered in The Lead Pile for awhile (only two and a half years by my count!), these horsemen seemed a reasonable target. 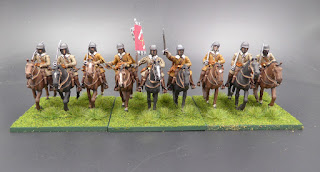 These nine horsemen muster out as Henry Ireton's Horse in buffcoats and lobster pot helmets.  The sculpting on both man and horse is superb.  The horses actually look like horses to me.  Perhaps the best horses I have seen in 28mm. The troopers are very good as well although detailing is not as raised and as easy to paint as in other figures.  Still, the results are terrific.  If I need to expand the cavalry arm of this project, Empress Miniatures is certainly high on the list. 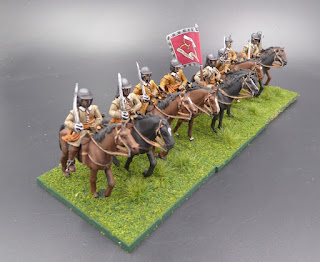 Enough infantry figures remain in The Lead Pile to muster out two more regiments.  I will set a goal of getting at least one of those regiments into the painting queue in 2019.
Posted by Jonathan Freitag at 12:00 AM 43 comments: 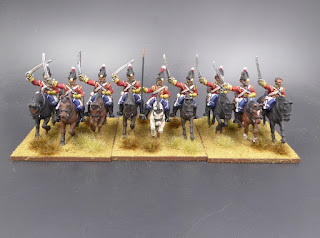 Time for the KGL cavalry contingents in the project to receive their new recruits and refitting.  After bringing in one new trooper each, the 1st and 2nd KGL Heavy Dragoons are ready for service.  Figures are Front Rank. 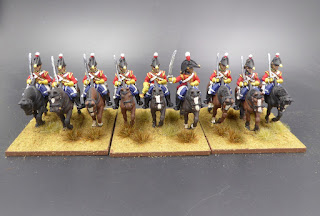 This refitting and reorganization exercise is turning out to be a relatively painless activity.  Painting one additional trooper per unit and rebasing takes time but not a task to be dreaded at all.  With the addition of one new trooper and a new basing scheme, I feel like an entirely new unit has been built.  I prefer the look of nine figure cavalry BMUs over eight figure BMUs.  I am pleased I forged ahead with this task.
Posted by Jonathan Freitag at 12:00 AM 38 comments:

With a son living in the other Washington (D.C., that is), our occasional travels to the Capitol always include visits to the Smithsonian museums and the National Gallery.

A regular stop, not to be missed by me, is the National Gallery of Art.  Upon every visit, the same selection of works always catches my attention.  Sometimes, I stumble upon these familiar works as I roam the massive museum.  Other times, I seek them out and try to recall in which wing of the Gallery these works are kept.  Some of my favorite works follow:
The National Gallery of Art is a national treasure and should be included in any visit to Washington D.C..
Posted by Jonathan Freitag at 12:00 AM 30 comments: 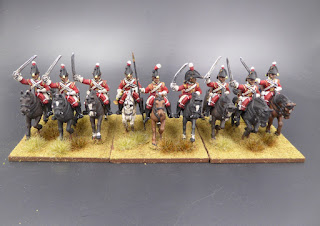 Another pair of cavalry units make it out of refit and reorg.  Each unit received one additional recruit and a rebasing exercise from four stands of two figures each to three stands of three figures each.  This time two British heavy dragoons units make it off the workbench.  The two units are the 3rd Dragoon Guards and the 4th Dragoon Guards.  Two fine British cavalry regiments.  Figures are Front Rank. 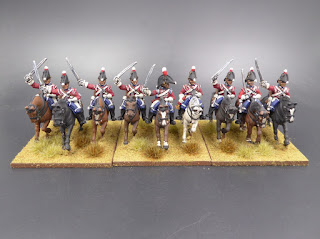 What remains in the cavalry refit and reorganization?  Waiting their turn at the recruitment center are two KGL cavalry units, two French hussar units, and a unit of Vistula Legion lancers.
Posted by Jonathan Freitag at 12:00 AM 46 comments:

Regret to Inform You...Google+ is Dead 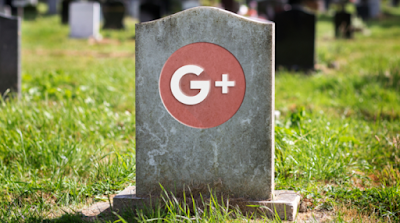 Well, we knew it was coming.  The data breach coupled with low usage put the final nail in the Google+ coffin.  Today I officially received an email from Google stating,


You've received this email because you have a consumer (personal) Google+ account or you manage a Google+ page.

In December 2018, we announced our decision to shut down Google+ for consumers in April 2019 due to low usage and challenges involved in maintaining a successful product that meets consumers' expectations. We want to thank you for being part of Google+ and provide next steps, including how to download your photos and other content.

On April 2nd, your Google+ account and any Google+ pages you created will be shut down and we will begin deleting content from consumer Google+ accounts. Photos and videos from Google+ in your Album Archive and your Google+ pages will also be deleted. You can download and save your content, just make sure to do so before April. Note that photos and videos backed up in Google Photos will not be deleted.


If you've used Google+ for comments on your own or other sites, this feature will be removed from Blogger by February 4th and other sites by March 7th. All your Google+ comments on all sites will be deleted starting April 2, 2019. Learn more

What does this mean for blogging in general and the Palouse Wargaming Journal in particular?

Since I did not use Google+ for blogging (well, at least I don't think I did), impact should be small.  One ramification of the demise of Google+ is that any comments created with Google+ (your own blog or another's blog) will be deleted.  Yikes!  How many Followers have left comments on PWJ using Google+?  I guess I will find out soon enough.  The second fall out regards photo storage.  If photos are stored on Google+, those are scheduled for deletion too. My.  It is hard to determine exactly where my photos are stored.  I hope all photos are stored on Blogger or Google.
Posted by Jonathan Freitag at 6:00 AM 48 comments: