Slingshot and the Society of Ancients 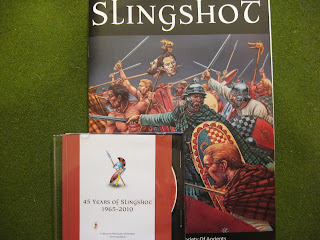 At the recommendation of several friends and bloggers, I sprung for a subscription to Slingshot magazine.  Although I placed my subscription to The Society of Ancients in August, my first issue (Issue 288) did not arrive into my post box until October.  Even then, the magazine header carries a May/June 2013 date.  Looks like the Journal has experienced change of leadership which delayed publication but expectations are to get back on schedule soon.

My first impression of Slingshot is that is it a very professionally produced full color effort.  Included in 288 is a good mix of articles especially a serial on the history of the Iberian Peninsula 400 AD to 1100 AD.  Part 5 on Islamic rule is recounted in this issue.  With my interest in the Reconquista, I may have to pick up the earlier magazines to obtain the entire picture.  Another period of increasing interest to me is that of the Biblical conflicts.  Issue 288 contains Part 5 of a series on the Transjordan.  This time, the Assyrians are mentioned.  Have yet to read the article but looking forward to it.  Rounding out the issue is an article on the history of Republican Romans vs Italians Gauls including a scenario on the Battle of Telamon 225.  Another article awaiting some time for reading.

After having been impressed with this first issue of my subscription and wanting more, I opted for the 45 Years of Slingshot, 1965-2010 on CD.  That package arrived within two weeks and for the amount of reading material contained within, it is a steal at  BP38.50.  With electronic format, I can transfer all of the issues to my iPad for reading on the go or when away from home on business trips.  Being completely searchable will aid getting quick answers to my many questions.  Outstanding product!

While I could have started at Issue 1, I began with the latest issue included and began working my way back in time to get a sense of where the Journal stands today.  Reading only the latest few issues, what I have really enjoyed are the recaps of Battle Days.  For example, Zama was selected and multiple players refought this battle using multiple rulesets and figures sizes.  Accompanied by some good analysis and historical comparisons. I look forward to seeing more of this type of work within the pages.
Posted by Jonathan Freitag at 10:11 AM 7 comments:

From the Vault: SAW Action at the Blockhouse

Having the Spanish collection returned gave me on opportunity to reflect upon the few games played with these figures.  As mentioned in an earlier posting (Cuba for the Spanish), this project was meant as opposition for two separate American opponents.  Rummaging through old photos, I found a few snapshots from a long past, skirmish game.  The game was held during the summer of 2000 against Jake's American forces.  Resurrecting these photos from the Wargames' Vault, following are my recollections of that encounter.  Of course, my recollections may differ from my opponent but he can tell his own story!

Advancing inland from Siborney, American forces were tasked with clearing a Spanish held blockhouse.  To reach the fort, a small stream had to be overcome which offered a small obstacle and increased vulnerability to the Americans as they crossed.
Upon hearing of the American approach, the Spanish commander sends out a company of regulars to delay and disrupt the American advance.  This forward company takes up positions at the edge of the jungle ready to act when the Americans appear.
While half of the Americans advance cautiously on the left towards the footbridge crossing the quagmire, the U.S. company on the right pushes across the stream.
Half of the right coy takes up a covering position among the entanglements along the stream bank while the other half fords the stream.

As the Americans advance on the right, the Colt MG sets up to provide additional fire support.
Firing erupts all across the line as the Americans find themselves under fire from both the jungle and the blockhouse as they advance towards the clearing.

On the American left, casualties mount from Mauser and mountain gun fire.
Back on the American right, U.S. machine gun firepower tips the balance and the Spanish take heavy casualties.  Suppressing fire forces a number of Spaniards to go to ground.  Many would not be getting back up.
Those Spaniards that do regain their feet are driven back onto the blockhouse.  Cuban rebels join into the fray on the American right.
As the noose closes upon the Spanish within the blockhouse and having lost their artillery support, the Spanish commander orders a withdrawal.  The surviving Spanish slip away into the jungle.
Thus ended the game.  Unfortunately, I do not remember what rules were used.  In fact, the markers seen in the photos do not look familiar.  Nevertheless, fond memories of a game long ago.  Now, I'm motivated to try this period again.
Posted by Jonathan Freitag at 5:34 AM 8 comments:

Having recently produced 96 6mm Roman heavy infantry, I switched figure size but kept within the same genre.  This time, Roman heavy infantry in 28mm made it onto the worktable.  These Renegade Miniatures' figures are armed with gladius and led by an Aventine officer.  The raw lead came into my possession from a lead swap with Scott.

Knowing that I would be fielding the Punic Wars collection in their first battle, my plan was to bolster the Roman contingent just in case they were needed to balance the forces.  The Romans required no additional assistance in the game. Although these heavies saw no service in that distant battle, they are present for duty in the next contest. 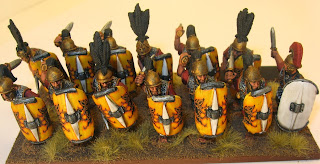 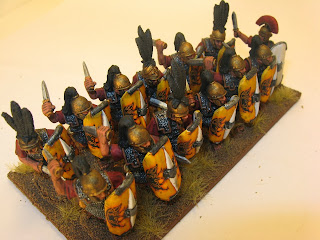 Spain Cuba for the Spanish!

A project started years ago and then abandoned may require further consideration.  The Spanish-American War project began as a joint project at least 15 years ago.  One of my gaming buddies had always had an interest and ties to the American forces in the Spanish-American War so wanted to field an American contingent.  I agreed to field some Spanish for small unit actions.
I built up about eight Spanish units along with a couple of guns.  We gamed with the figures on a number of occasions but as often happens, a relocation brought an end to the project.  Luckily, another gaming buddy showed an interest in the period and he began collecting U.S. forces for the conflict.  Again, relocation put a hold on the project while he was deployed overseas.

Having finally given up on the project,  I put the figures up for offer.  Another gaming buddy took the figures and held them for a year or so before finally deciding to return them.  While the collection was away, I painted a few more figures that I had laying around.  Now with the Spanish back in house, I need to decide what to do with them.
First thing I did was run a few figures through the dip.  The dip tends to bring out highlights and gives the figures a more campaign look.  In this case, the relief on the helmet band was nicely raised.  I like that effect.
With too many figures for single stand movement, I need to settle upon a new basing scheme.  My thought is to base these figures three per 60mm x 30mm stand and see how that looks.  This basing scheme should work with many rules sets especially Field of Honor. I may change my mind but this provides a starting position.

Now, what to do with my languishing 1/1200 Spanish-American War naval collection...
Posted by Jonathan Freitag at 3:24 PM 12 comments:

This week, a second stand of Muslim horse archers joins the Reconquista project.  Figures are Black Tree Design and are based for Impetvs.  In the first Reconquista game,  I found horse archers to be very effective at harassing the enemy with the ability to evade contact.  If one was good, two should be better, right? 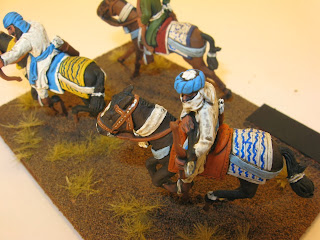 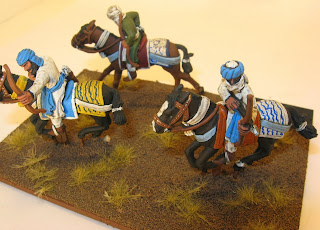 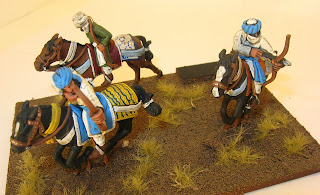 Posted by Jonathan Freitag at 5:46 AM 14 comments: 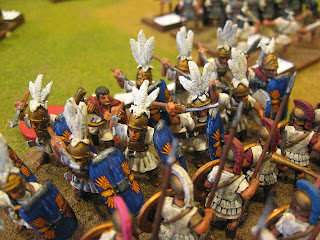 Saturday's contest was a game of firsts: first game of Impetvs for the Punic Wars and first game using my growing 28mm Punic Wars collection.  Jake commanded the Romans while I took the Carthaginian contingents.  Since this was our first game, play was a little sloppy as we became familiar with the rules.  While some rules mistakes were made, by mid-game the actual use of tactics emerged.  Next Impetvs game will likely turn from Basic Impetvs to the full version.

We gamed nearly six hours with a break for lunch.  Neither of us felt gaming fatigue that often occurs with longer gaming sessions.  The game swung back and forth throughout the battle.  In the end, Rome won a narrow victory but we both had an enjoyable day of gaming.  During the day, discussions included the possibility of Jake fielding EIR armies. We'll see!  I hope to see more Impetvs games on the table.

Returning to the Samurai Battles project in 15mm, mustering out from the painting desk one stand of Ashigaru bow.  The figures are Peter Pig and carry the Red Devil motif of the current Work-in-progress brigade.  Remaining to fulfill in the Red brigade are one stand of teppo and one stand of dismounted Samurai.  The teppo will continue in the red fashion. Samurai will likely be a mix of lacquered armor with black and red as the dominate scheme. 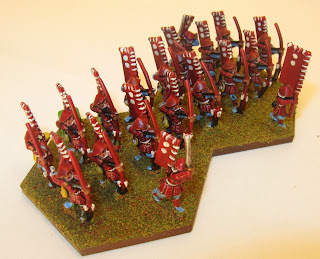 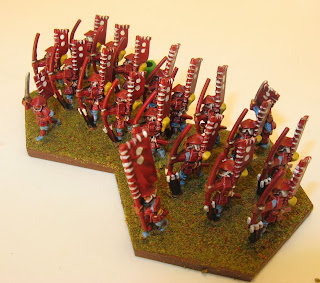 Jake brought one of his Samurai Battles' forces to Spokane on Saturday but due to the length of the Impetvs game, no time to fit in a quick game of Commands & Colors.

In a radical change, I have managed two face-to-face games in November with two weeks remaining.  Usually I am lucky to get in one FTF game per month and, otherwise, must content myself with painting and solo exercises.
Posted by Jonathan Freitag at 5:22 PM 12 comments:

Jake is driving up from Moscow to try our hands with Impetvs and the Punic Wars.  Hopefully, he'll make it through the snowstorm without incident.  In anticipation, I deployed the troops onto the table and prepared them for battle.  This is the first time the project has been on the gaming table for action.  What began as a small foray into fielding opposition for Scott's massive 28mm Ancients collections, my own, modest project underwent scope creep.  Currently, two 400 point Impetvs armies can take to the field with more to come.

Today's contest will be a nearly even match across open terrain as we give Impetvs (Basic or Regular?) a go.  Now, on to troop deployments...

Posted by Jonathan Freitag at 9:52 AM 18 comments: