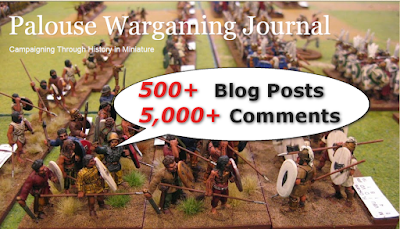 When I struck out on this blogging endeavor I call the Palouse Wargaming Journal approaching three years ago, I really knew not what to expect.  My initial objective was to create a place to which I could log and archive my hobby activities.


Would anyone else find my work interesting or mildly entertaining?  I knew not.

Could I make a small contribution to the body of wargaming?  Again, I knew not.

Would the novelty of blogging wear off as a passing fad?  I knew not.

Would the effort required to maintain a blog quickly dampen my enthusiasm? I knew not.

I know now that blogging has been a useful way to plan and archive my wargaming activities.  For planning, commitment to "as it is written so shall it be done" is a great motivator to remain focused and tackle goals set out.  Blogging has become an integral part of my hobby enjoyment.

I know now that feedback received from readers is a most rewarding source of encouragement.  I count many of the frequent contributors as friends.  If the opportunity arose, there would be no hesitation in facing any of these fine fellows across the gaming table in battle or discourse.

As a token of my appreciation and gratitude to those who stop by for a visit and especially for those making the extra effort to leave a comment, I offer up a few items from the store house.

I submit the following items to a random drawing.  There are two criteria for participating in the drawing (both must be satisfied): 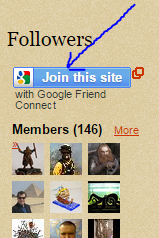 On to the prizes!  Of course, if I pull your winning entry from the Random Sampling (without replacement) Hat, the winner could also opt to take a dive into The Lead Pile for a handful of goodies.  A majority of the books are wargaming related but Austerlitz and Maida are cracking good historical accounts.  All are either in new or like new condition.
Deadline for entries is 10JUL2015.

Any questions?
Posted by Jonathan Freitag at 10:00 AM 61 comments:


After a longer than expected hiatus, the Raab replay is back in play.  To refresh fading memories on the status of the game, see Raab 1230-1300 account.
At the start of the 1300 hour, Eugene sees most of his French forces return to good order;  the exceptions being the 2/9 Hussars and 1/Italian Dragoons on the French right and 1/102 Line in the center.
On the French right near the Upper Bridge, Colbert begins gingerly picks his way back across the Pancza Brook while Seras' cavalry attack towards the church.  Somewhat isolated on the east bank of the Pancza, the never timid Grouchy keeps applying pressure to the Austrian cavalry defending the bridge and ford.  Grouchy leads his disordered 1/Italian Dragoons in an attack against the disordered 1/2 Joseph Hussars.
Disordered and caught standing still, the Austrian hussars are easily scattered.  Hadik is severely injured in the melee.  The momentum carries the victorious Italians into the 1/Heves Insurrection cavalry who are, in turn, roughly handled by the dragoons.  Grouchy, with his cavalry exhausted, breaks off and falls back to the banks of the Pancza.

Witnessing Grouchy's success, the overconfident 2/7 Dragoons cross the Upper Bridge in column and are immediately countered by 2/Zemplin Insurrectio cavalry.  With heavy casualties to both but unable to bring their mass to bear while in column, the French dragoons retreat back across to the west bank of the Pancza.

After a long circuitous route to get to the east bank of the brook, Seras' cavalry swings into action in support of Seras.  Both the 1/9 Chasseurs a Cheval (CaC) and the 2/9 CaC attack the Austrian cavalry that has thus far been holding up Seras' advance from the church.  As the French approach, the Austrian cavalry counter attacks.  While casualties are heavy in the clash between the 1/9 CaC and 2/2 Joseph Hussars, the Austrian light horse are able to repulse the French.  The 9th Chasseurs break off their attacks and fall back to the Pancza.
With the loss of the 1/2 Joseph Hussars and the demoralization of 1/Heves Insurrection added to the earlier loss of the 1/Westprimer Insurrection cavalry, Andrasy's green cavalry formation panics.  As Andrasy and his command stream towards the rear, many insurrectio troopers call it a day and desert.  These losses are heaviest among the 2/Westprimer and Odenburger Insurrectio.  Andrasy's panic effectively relieves Seras' concern for being taken in the rear by Austrian cavalry.
While cavalry clashes are swirling on the French right, artillery in the center begins to take effect.  With the Austrian Reserve guns repositioned on the Szabadhegy Heights, Seras and the 1/53rd Line fall under the guns' sights.  With some protection offered by the church, the 1/53rd only becomes disordered by the barrage.
To the north of Kis-Megyer, Lutz' guns disorder 1/1st Italian Line as Severoli's division nears the banks of the Pancza.  Having an advantage in both quantity and quality, Severoli appears determined to force a passage of the Pancza obstacle below Kis-Megyer.
At Johan's HQ, activity is abuzz.  With both Frimont and Kienmeyer down to injury, the Reserve Corps is in a state of chaos. With Gajoli's command in motion towards the south to thwart any advance from Seras, Johan recalls Gajoli to fill Frimont's empty boots.  Gajoli gets a battlefield promotion!  Having sent orders to Gajoli to join him on the Heights, Johan hurries to rally the Reserve Corps.  The grenadiers and IR 2/19 rally as the demoralized IR1/19 continues its rout.
On the cavalry wing on the Austrian left, Andrasy's panicked formation cannot recover.  The remainder of 2/Westprimer's Hungarian cavalry flee the field of battle.

In Groztony's old command, 5th Ott Hussars and 1/Bacser Insurrection rally.  The 5th Ott Hussars attack the French as they attempt to form up after having successfully negotiated the Pancza.  In each engagement, the French horse force the Austrian horse to break off their attacks but not before the French 2/20 CaC fall back across the Pancza.
In the center, the sound of artillery fire increases but only Durutte's guns find their target.  IR61 suffers moderate casualties and becomes disordered as it stands in the open near the Kis-Megyer farm.

At the bottom of the 1330 hour, the Austrian left cavalry wing under Mescery shows signs of crumbling.  Andrasy is in retreat and both Grosztony and Hadik have been lost to injury.  Casualties among the troopers mount.  Still, the French cavalry have not been able to pass to the east bank in numbers.  More French cavalry are on their way to support French attacks at the Upper Bridge.  Thus far, the Austrian cavalry on this wing have fought like lions.

In the center, a bit of a battlefield lull descended over the Kis-Megyer complex as both commanders sorted out recent reverses.  Will Severoli be successful in mounting an assault across the Pancza?  Will Durutte reattempt his earlier failed assaults against Kis-Megyer?  Will Seras be able to hold off a pending Austrian counterattack?
Posted by Jonathan Freitag at 10:00 AM 22 comments:

May and June have been two months of much travel.  By the time the end of June rolls around, I will have been away for about half of each month.  Not good for hobby activities.  Typically, I travel to Seattle regularly for work.  Having recovered from two weeks in Peru, this week saw me hit the road for a week in the city on the Sound.

When the Seattle weather is forecast to be good, I bring along the bike for after work rides.  With sunny skies and temperatures in the upper 70s F (for my European friends, I must stick to Fahrenheit since Celsius just does not quite connect), the bike and gear were packed for the journey.

Often the post-work ride includes routes around Lake Washington.  The main bike route around the lake comes in at about 55 miles.  Monday and Tuesday rides did not fully circumnavigate the lake but I logged about 35 miles each day over different routes.  Monday's route included crossing Lake Washington via the I-90 bridge.  Luckily, there is a separate and dedicated bike lane crossing the lake.  Is there any place more beautiful when it is sunny and warm?

While the photos were captured using my old iTouch, I hope you enjoy a sample of the lakeside scenery. 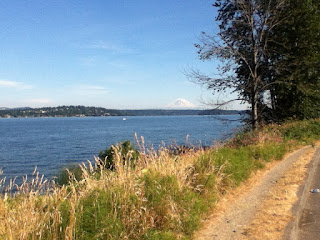 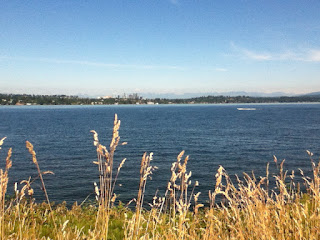 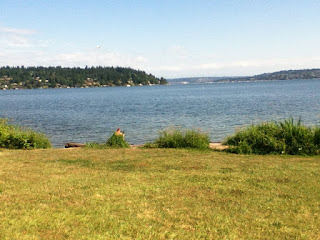 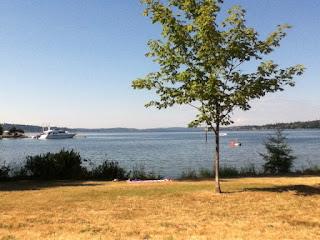 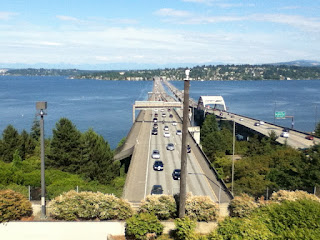 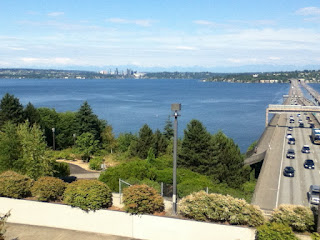 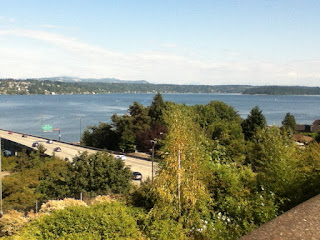 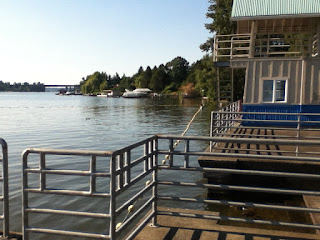 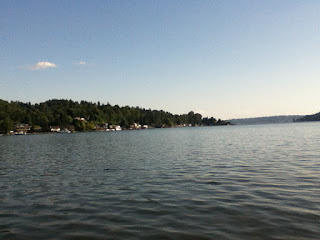 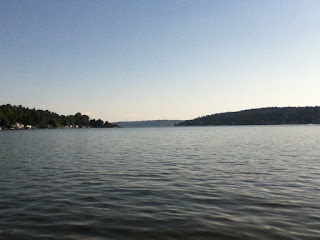 The first figures to make it across the painting desk in June are 36 Old Glory French from the FPW/FAW range.  These 36 figures comprise 3 x 12 figure battalions and are the first French infantry from this range to see some paint.

The sculpting is good but the molding execution on some of the models is suspect.  For one, some heads seem to be molded not quite in the right position.  That is, heads set up a little too high at the shoulder and barely hang by a thread.  Not as many as is the case for the Austrian infantry.  Weapons also seem to suffer from molding issues with detailing on some muskets lacking.  Still solid and functional foot for the forthcoming French masses and the sculptor did introduce much character into the figures.  The poses and uniform details remind me of subjects in Detaille's paintings. 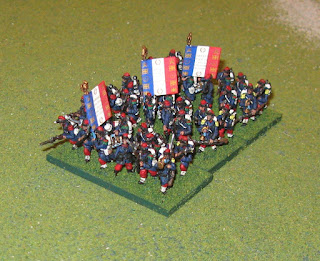 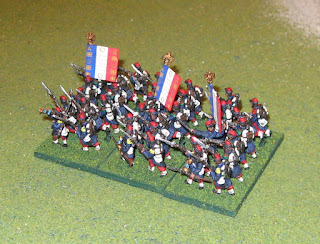 As a comparison, a group photo below shows one French battalion each from Freikorps 15s, When Navy Walked, and Lancashire Games with two battalions of the recently painted Old Glory figures.

Freikorps 15s are clearly the smallest with Old Glory coming in at the next smallest.  Lancashire Games are the largest but on the gaming table these size differences disappear.

Many more French from both Old Glory and Lancashire Games remain to hit the painting queue.
Posted by Jonathan Freitag at 10:59 AM 22 comments:

If wargaming-related background material is just the ticket to help in commemorating the 200th Anniversary of the Battle of Waterloo, Karwansaray Publishers is offering a three issue, digital bundle of their WSS magazine. 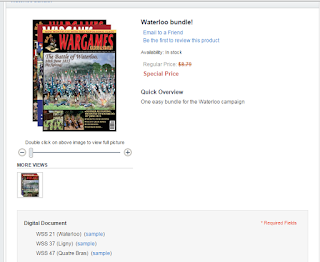 March over to the Karwansaray link above to order the three-set bundle including Issues:


Great stuff and thank you, Karwansaray!

Perhaps pick up another digitial issue or two while you are there.
Posted by Jonathan Freitag at 11:11 AM 10 comments:

Email ThisBlogThis!Share to TwitterShare to FacebookShare to Pinterest
Labels: Miscellany, Wargaming in General

Late Spring Cycling on the Palouse

One of the pleasures of living on the Palouse is the variety of terrain over which to cycle.  With a mix of canyons, rolling hills, forests, rivers, and lakes, an afternoon ride can encompass all of these features in less than a two hour spin.  Late spring is especially colorful with the rolling hills of young wheat and the bright yellow of rapeseed (used in making canola oil) in bloom .

After being off the bike for more than two weeks while on vacation and with temperatures hovering in the mid-70s to low 80s F, I was anxious to get back out onto the bike.  Sunny skies and warming temperatures make for enjoyable afternoon rides.

Monday's ride highlights the yellow blooms of rapeseed on my way south of town, up a steep switchback to the top of a canyon, and then back. 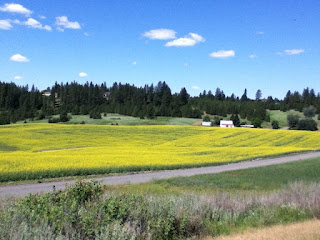 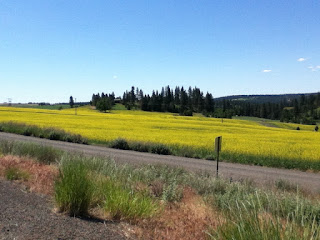 Monday's ride has an elevation profile (shown below) highlighting the lumpy nature of the Palouse. 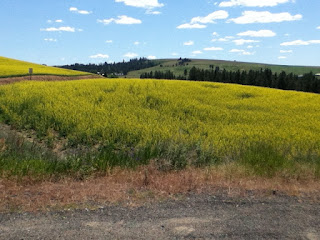 Posted by Jonathan Freitag at 9:30 AM 16 comments: