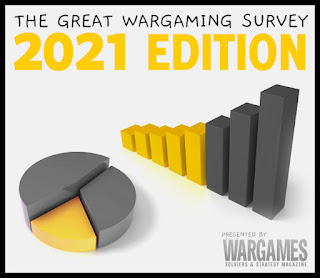 Wargaming offers up a multitude of activities from which participants can derive both purpose and pleasure.

In the 2021 Great Wargaming Survey, survey respondents were asked which wargaming activities represented the best part of the hobby.  Respondents could pick up to three choices.  The counts of all responses are summarized and ranked in Table 1.  Among the list of choices, the Top 3 responses were:

The Top 3 aggregated responses accounted for almost 60% of all responses.       Any surprises in the rank ordering of survey responses?  Not to me.  The survey's Top 3 were likely my top 3 choices as well in 2021, too, although “research” fights for a Top 3 spot.

What if survey responses are stratified by some of the key variables that have been examined in past analyses?  Do any patterns or tendencies emerge?

Age Group
What tendencies are seen when examining the top responses by Age Group?  Well, the importance of building optimal army lists and collecting miniatures tends to decrease with age.  The tendency that stands out to my aging eyes is that the 61+ Age Group seems more introspective than the younger age cohorts.  Collecting miniatures and hanging out with friends tend to be relatively less important than doing background research and preparing scenarios. 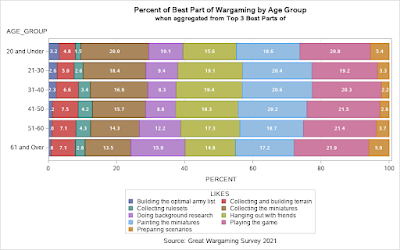 Primary Interest
When bifurcated by primary interest, big differences emerge between Historical and Fantasy/Sci-Fi wargamers.  Fantasy/Sci-fi wargamers are more interested in building optimal army lists, collecting miniatures, and hanging out with friends than their historical counterparts.  Historical wargamers, conversely, are much more likely to do background research or prepare scenarios than the Fantasy/Sci-fi group. 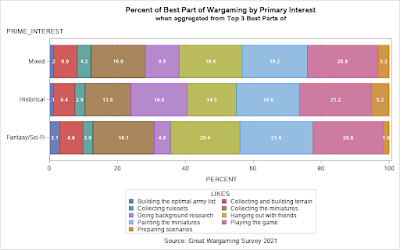 Spending
Unlike Age Group and Primary Interest, there is less distinction between the aggregated best parts of the hobby and spending.   Of note, though, is that spending tends to hold a direct relationship with collecting miniatures and an indirect relationship to playing the game.   I suppose this tendency makes sense in that the more miniatures one buys and paints, the less time for gaming. Perhaps these big spenders are more collectors than wargamers? 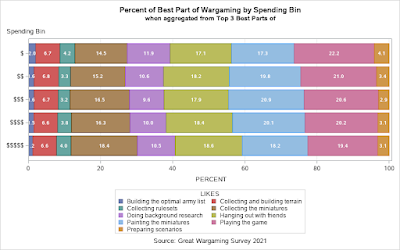 That wraps up this brief look at how survey respondents see the best part of the wargaming hobby.

What are your Top 3 activities?  Do your choices mirror your age cohort, primary interest, and spending level?

Posted by Jonathan Freitag at 2:17 PM