Rome v Carthage - To the Strongest! 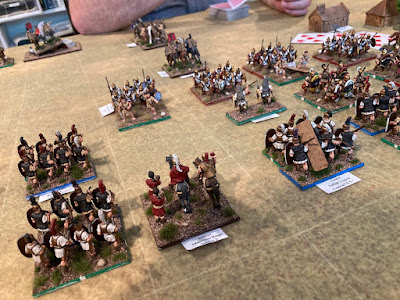 Two weeks ago, Kevin and I reconvened at Scott's to refight a Second Punic War battle fought the month before.  In that first match, Rome defeated Carthage handily.  Kevin, as the Carthaginian general figured his outnumbering army ought to be able to defeat the smaller, Roman army on the field.  To test his theory, Kevin took command of the Carthaginians in an encore presentation while I returned to my role as the Roman general.  The Carthaginian Army being larger must lose 12 tokens before the army breaks.  The smaller Roman Army may only lose 9 tokens before breaking.
Let's see how the battle played out.
Well! Carthage falls to defeat a second time with a score of 12 tokens to 5.  Another fun came with non-stop action throughout.  Always a pleasure pushing Scott’s beautiful troops across the table.  Early on, the Romans were very unlucky to lose their left cavalry wing at the hands of lowly Numidian cavalry.  Embarrassing.  The Roman cavalry general saved his reputation by fighting a cagey battle of maneuver to capture the Carthaginian camp.  I think that in itself yielded either three or four tokens and honors for the day.
In the final throes of battle, the Romans managed to maneuver into position to attack the enemy from both front and flank destroying their opposition.  Not once but twice!
Kevin thought the battle could have gone the other way.  Maybe next time?
Posted by Jonathan Freitag at 12:00 AM

Email ThisBlogThis!Share to TwitterShare to FacebookShare to Pinterest
Labels: 28mm Ancients, Battle Report, To The Strongest!