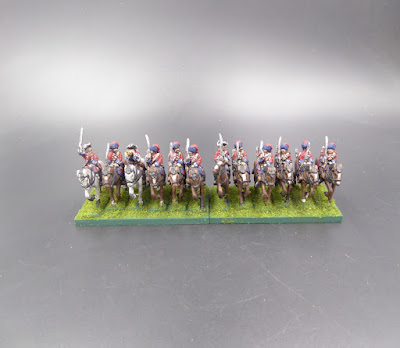 Gaming and planning for games are consuming much of my hobby time of late.  Two games (possibly even a third) are scheduled for this week, and I am making preparations to host a remote game on the 23rd.  Given these demands, meaningful painting sessions continue to be few. 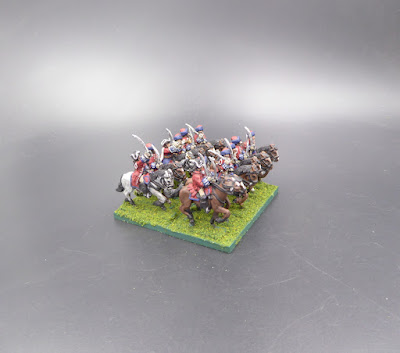 Progress is being made, however.  Off the painting desk is the first French cavalry contingent for the 18mm SYW project.  Mustering out today are two squadrons of French dragoon regiment, La Reine.  Figures are from Eureka Miniatures.  Several more French cavalry units are in work and slowly making their way through the painting queue. 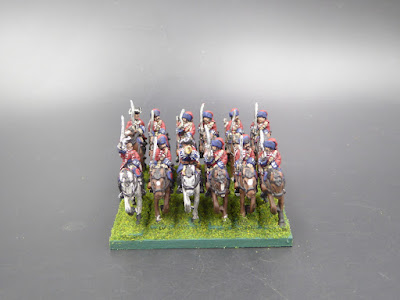 With sights set on getting enough French together to field a viable force for some smaller WAS battles, I still have much work to accomplish.  One battle in mind requires seven cavalry units.  Having only one completed, I need to pick up the pace.

The Alamo battle mentioned in the previous post, we fought on Saturday.  Scott and I took command of the Mexicans while Tim and Jeff hunkered down behind the palisades of the Alamo.  As seen in the photo below, the Mexicans stormed the defenses early in the second wave and few Texicans escaped.  Bowie and Crockett fell early in the fight.

With several days of rain combined with spring snowpack melt, the Spokane River is swollen with water.  Last week, I made a short stroll along the Lower Falls to see the action.  In the photo below, a torrent of water passes over the Monroe Street Dam and down the Lower Falls.  The volume and power of water flowing through town is impressive.  To get a sense of scale, the gondolas dangling near the bridge each holds four passengers.
Time to put together a battle plan for Tuesday's game as I take command of the Scottish army at Falkirk. If I can call upon the Gods of fortune, perhaps, I can reverse history?  Probably not but it will be fun to try.

Posted by Jonathan Freitag at 10:29 AM