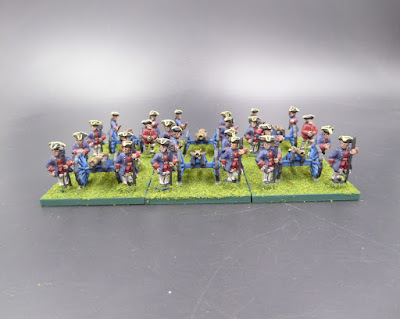 With the Las Guasimas game taking up a lot of my time this past week (preparation before Tuesday, game on Tuesday, battle report on Wednesday), hobby activities seemed to wane the remainder of the week.  Well, I did revisit the hidden movement process present in Tuesday's game and overhauled that procedure.  A few trials suggest that I am satisfied with the direction and effect of the improvements.  We will see what others think next time I spring a SAW game on them.  Not sure I am ready for that.  Regardless, I save those discussions for another time.  In the meantime, I plan to run through the scenario at least once more. 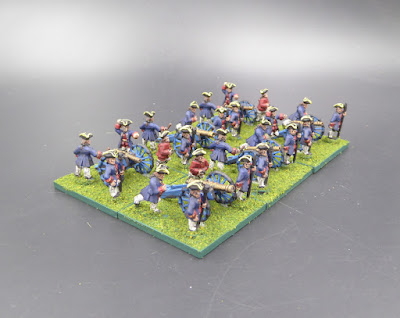 Today sees the latest results from the painting desk.  Off the workbench are six French guns and 24 crew for the SYW project.  Rather than the usual Eureka guns and crew, I opted to field a bag of Old Glory artillery.  I picked up a bag of artillery when I made the year-end order to load The Lead Pile up with Old Glory French infantry.  Again, an Old Glory infantry choice is unusual for this project.  Most infantry are Eureka augmented with Blue Moon and a few Lancashire Games figures.  I did not care much for the poses of the Eureka French so went with the Old Glory French which are excellent.  Good choice, I think. 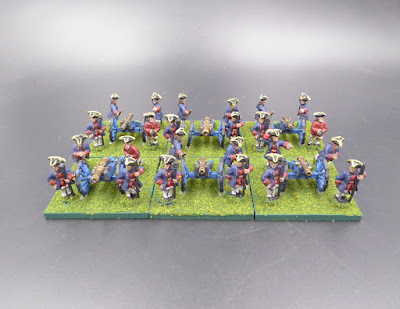 The painting desk is still showing SYW French activity.  Cavalry are moving through the production line.  Perhaps a bit too slowly.  A few units will be emerging soon.  Cavalry figures are Eureka.

Also on the workbench is the completion of a box of Perry WotR' Men at Arms figures.  When I completed the six Battles, enough MAA figures remained to field two more MAA Battle components of thirteen figures each.  The two additions will be for Somerset and Clifford.  I suppose I ought to place an order with Perry to field the bill and bow components for these two Battles.  What I originally thought would comprise a collection of six Battles may expand to include eight Battles in total.  Sigh.  It never ends.