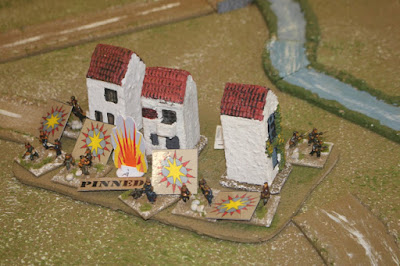 Graham set up another two-player Spanish Civil War scenario for his For Whom the Dice Rolls rules.  I would be commanding a Nationalist column of crack troops intent on securing two towns and a critical bridge on the drive to Madrid.  The success of the offensive would depend upon how quickly my column could secure these objectives to protect the army's left flank.  Ahead of the game, I was provided with my OB and an aerial photo of the area of operations.  I was also given the possibility of having limited air support.
My force would be attacking from the west toward the two towns and bridge with orders to take all three objectives with all haste.  Of the Republicans dispositions, I knew little.  Limited intel suggested that militia was on the way in strength to thwart my attack.  While the aerial reconnaissance identified no enemy opposition, my hunch was that the towns would likely be enemy held.
How did the battle play out?  Please read on.
As my force approached the area of operations, the town nearest the bridge was already in enemy hands.  The town on the left was soon to be occupied by enemy militia.  With two of the objectives already in enemy control, what was my plan?

My plan included advancing the Legion up the middle to prevent the militia in the far left town (top of photo) from reinforcing the enemy center and to support the Moroccan attacks upon the central town.  To begin, my artillery targets the occupied town and begins a barrage as my troops advance.

The Legion and one Tabor of Moroccans advance into cover and begin to deploy.  The second Tabor moves swiftly to the edge of the town and debusses while the town's occupants are under bombardment.

The Tabor at the town prepares to attack by forming up into a firing line.  A third militia battalion advances to the riverbank and enfilades the Moroccans as they prepare to attack.  The Moroccans suffer light casualties from the militia but carry on with little concern for the security of their exposed flank.
The Legion is the target of an enemy airstrike.  While the attack results in pinning the Legion, casualties are light.  Whew!

With the town secure, the first Tabor advances quickly from its covering position and works its way to the right of the town.  A Nationalist ground strike comes in over the battlefield strafing the militia on the far bank.

Shocked by this attack, the militia retreats back.  Unfortunately for this militia, a second wave of fighters appears overhead and strafes them a second time.  Ouch!

With one town secured and the supporting militia driven back, the Legion advances upon the far town.

Having set the Legion in motion toward the town, artillery is redirected to target and soften the defenders up before an attack can go in.  Before the artillery rains down, the Legion deploys into firing line and gives the defenders a bit of softening up themselves.

As the barrage lifts, the Legion strikes.  Having recovered from the double air strike, the enemy militia moves forward toward the river.

Unfortunately, the Legion's assault on the distant town is repulsed with light casualties to both.  Meanwhile, having set up a strong defensive position, the Moroccans in the town begin concentrating their fire upon the approaching militia.

At the far town, the Legion goes back in to contend with its stubborn defenders.  The first Tabor moves up to the river discovering that it is crossable.

The Legion's second attack is no contest and the defenders are butchered in the confines of the town.  The second objective falls.  The first Tabor crosses the river and attacks the militia.  This battalion, too, is destroyed in the open field.  With three of the four Republican battalions tasked with the defense destroyed, the Civil Guard abandons its position.  Battle won by the Nationalists.
Well, that was a short, sharp action!  While the battle account may make this scenario appear as a walk-over, it was not.  Graham had terrible luck with his firing dice.  In the rules, hits accumulate for each '6' rolled.  At one point, 39 D6s rolled without having any 6s appear.  Zero for 39! Soon thereafter, another 39 D6s rolled only two hits.  Graham retired those dice!
As a two-player game, this played in about two hours.  Action was quick and in many cases, decisive.  When proper tactics are employed on the miniature battlefield and produce expected and historical results, the system generating those results is solid.  The proper interaction and coordination between infantry, artillery, and air have an elegant beauty to behold.
Fun game!
For Graham's perspective on the battle and many more terrific close-up photos, please visit, With The Legion In Spain.
Posted by Jonathan Freitag at 10:40 PM