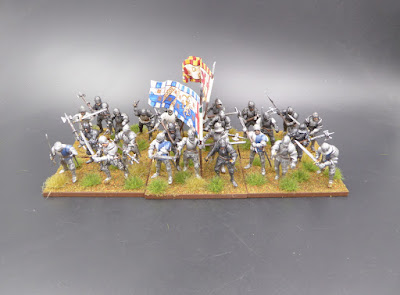 The way in which the Perry Miniatures' War of the Roses boxes are configured, I can field one Battle's worth of bill and bow from one box. To complete a Battle, 13 figures from the Men-at-Arms' box are needed.  As the number of Battles grows and my suboptimal planning kicks in, I end up with a surplus of Men-at-Arms figures.

Typically, each 52 figure Battle is fielded at one time.  Rather than wait until the next order from Perry arrives, I crack on with the MAA components.  The bill and bow complement will straggle in at a later date. Until those stragglers arrive, work goes forward.

Off the painting desk today are 26 Men-at-Arms figures for two Battles.  These are MAA for Somerset and Clifford.  Flags are Pete's Flags.

On the gaming front, Friday sees a return of Commands & Colors Ancients action in 6mm with a revisit to the Battle of Caralis.  Previous battles have been closely contested.  Kevin wants a rematch.  Who am I to say no?

On deck for Monday is the Franco-Austrian War battle of San Martino in 15mm.  While this northern part of the Battle of Solferino has seen action before, I have never hosted it remotely nor on a grid.  There have been some revisions to the rules and scenario to fit the number of players, remote gaming, and a grid.  Actually, a new ruleset will be in play for this action.  More details on the game setup before Monday.

Posted by Jonathan Freitag at 6:31 AM

Email ThisBlogThis!Share to TwitterShare to FacebookShare to Pinterest
Labels: 28mm War of the Roses, Perry Miniatures