On the Table Today is... 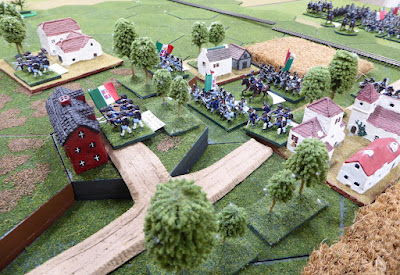 the Battle of San Martino, 1859.  The table is set and the guns are silent, for now.

In a twist of irony, I have been accepted by the Rejects to host a remote game for their group.  At least three of the Rejects are active bloggers and in commentary I suggested that we might have a go at a remote game.  Well, they accepted.  On Monday, I expect six players to fill the roles of brigadiers and CiCs to refight the action at the southern end of Lake Garda.

I know both teams of three are making battle plans for the day and questions have been drifting in from parts unknown.  Almost unknown.  I believe the Rejects are based in the London Kent area of the UK.

The Battle of San Martino comprised the northern portion of the larger Battle of Solferino on 24 June 1859 fought simultaneously to the south.

The battle began as the Sardinians sent out a number of reconnaissance forces to probe southeast from Lonato and Rivoltella towards Pozzolengo. Rather than fielding an integrated advance guard to act as the recon force, the Sardinians drew off battalions and squadrons from each division and sent them on their way.

One of the largest of these recon contingents was drawn from Mollard's 3rd Division. Not expecting Austrian resistance on the west bank of the Mincio River, Mollard was surprised to run into Austrian forces at Ponticello. What was initially thought to be only Austrian screening elements turned out to be Benedek's VIII Corps centered on Pozzolengo. Benedek, likewise, was surprised to discover the Sardinians bearing down on his corps in force.
Mollard realized his miscalculation and fell back to the heights around San Martino. While Sardinian columns continued streaming towards Mollard's positions at San Martino, Mollard prepared for a defensive action until sufficient force could be gathered to push Benedek back onto the Mincio. Not waiting for the Sardinian storm to gather over San Martino, Benedek counterattacked to prevent the Sardinians from compromising the Austrian line of communication over the Mincio.The scenario picks up where my narrative ends. That is, elements of Mollard's recon column hold the San Martino heights while reinforcements continue their march to San Martino. Benedek has several brigades from two divisions poised to attack the heights. The Sardinian objective is to cut the Austrian line of communication across the Mincio by taking Pozzolengo directly. Indirectly, an attack toward Madonna del Scorpeta may turn Benedek’s left and separate Benedek from the bulk of the Austrian army engaged at Solferino. Since Benedek's force anchors the far right of the Austrian army and protects the army's line of communication, the Austrian VIII Corps is tasked with holding the Pozzolengo position until ordered otherwise. Falling back behind the Mincio too early would allow the Sardinians to reinforce the French at Solferino. With the table set, armies deployed, and instructions delivered, the table lays in wait of battle.

Posted by Jonathan Freitag at 11:30 AM