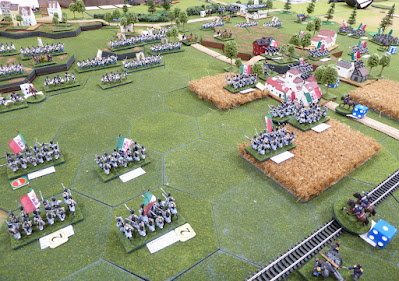 As planned, the San Martino battle kicked off on Monday at 6:00pm GMT with five of the six Rejects taking their positions around the remote gaming table.  Ray, due to work commitments, could not make Monday's game.  With a little luck, perhaps, we will see Ray when the battle continues.

The Austrians had three players (Richard, Lee, David) commanding 26 BMUs.  The Sardinians, with two players (Steve, Ian), took command of 30 BMUs.  Both armies have opportunities to attack and defend.  The Austrians are slightly outnumbered but looks can be deceiving.  Austrian infantry battalions carry rifled muskets and field more manpower than their Sardinian counterparts.  The Sardinians mostly muster out with smoothbore muskets.  Cavalry contingents for each are small and artillery is not too numerous.

To win the battle, the Sardinians must hold at least two of the three objectives of Contracania, San Martino, and the bridge near San Donnino.  If the Sardinians also take Pozzolengo, they score a major victory.

For the Austrians, they must hold Pozzolengo and hold at least two of the three objectives of  Contracania, San Martino, and the bridge near San Donnino.  Possess all four objectives by battle's end and the Austrians score a major victory.  As suggested by the victory conditions, the San Martino Heights which dominate the central position, figures to see heavy fighting.

The two teams had about one week to prepare their battle plans.  The Rejects quickly chose up sides and began to prepare.  Both teams got into the spirit of the battle planning phase by asking a number of very good questions about scenario and rules.  From the questions asked, I gained a sense of what each army might be planning.

Let's see how the battle developed...

Benedek's Austrian Corps begins the action by moving sharply toward the San Martino Heights.  Lippert, on the Austrian left, scales the heights and encounters the Sardinian Bersaglieri defending Contracania and Ortaglia. Lippert's men suffer some casualties from these long-range exchanges.  In the Austrian center, Philoppovic advances to keep pace with Lippert sending his jaegers out as a screen.  Watervliet, holding the high ground on the right, maintains his position.  Is Watervliet being held in reserve to discourage an attack toward Pozzolengo?

With only Mollard's reconnaissance column on the battlefield when the shooting starts, Mollard is relieved to see Arnaldi and Morozzo's brigades come up in support on turns one and two.Lippert advances upon the heights while Philoppovic and Watervliet throw jaegers out in front of their two brigades.  King Victor Emmanuele reaches the battlefield with Arnaldi as Arnaldi advances along the main road.  Morozzo, however, splits his command.  Morozzo, along with half of his cavalry and the 13th Infantry Regiment, swings around to the west of San Martino making an apparent push toward San Donnino and the bridge to Madonna del Scoperta.  Interesting!  The King, himself, takes command of the 14th Infantry Regiment and two squadrons of cavalry and advances to the east of San Martino.  Anxious for action, the two squadrons of Monferrato's cavalry accompanying the King strike out toward the Austrian lines.  Is he attacking to delay the Austrian advance?  Monferrato's light cavalry, unsupported, are driven off by Austrian jaegers but not before inflicting light casualties.   In a surprise to all players and umpire (well, except for Ian), Morozzo (Ian), releases two squadrons of the Monferrato cavalry from reserve and attacks IR 59/3 near San Donnino. The Sardinian light cavalry swings around the Austrian infantry and hits them before they can effectively respond. The 59th suffers heavy casualties before falling back into the village of San Donnino.Seeing the threat to San Donnino and the vital bridge to Madonna del Scoperta, FML Benedek brings up the Reserve Artillery.  The heavy battery he orders to San Donnino while the medium battery he positions covering the gap between San Donnino and San Martino Heights.  The Austrian 1st Hussars are brought up in support for good measure.As fighting intensifies on the heights, casualties mount.  The Bersaglieri defenders of Contracania, suffering heavily from the fighting, are replaced by one of Mollard's infantry battalions.  The Sardinians stand firm.

With casualties climbing in the advance upon Contracania and Ortalia, Lippert has seen enough.  He orders his brigade to fall back to safety.  Is he more concerned about casualties suffered or threat to his flank?

Philoppovic maintains steady pressure against the defenders positioned in front of San Martino.  The lengthy firefights are taking a toll.  One Sardinian battalion is destroyed defending the vineyard while the guns in front of San Martino are wavering.  The Austrians seem content to keep the Sardinians at a distance and attack from afar.  The Austrians must take the high ground.  When will the inevitable attack come?

After five turns of play, the battle is still undecided.  With the outcome still contested and time for only one more turn in session 1, players agree to continue battle in a second session rather than press-on for one more turn.  The follow-up session with be on 30 May.  Stay tuned for the conclusion of the San Martino battle.Players have been issued troops dispositions and casualty returns to plan for the battle's conclusion.
With the situation as given at end of play, how would you tackle the challenge of gaining a victory on this field of battle?
Until next time...
Posted by Jonathan Freitag at 4:30 PM