Anatomy of a Project - SYW in 18mm

The SYW collection has been tucked away in boxes for far too long.  With the recent addition of a Swiss battalion to the mix, I figured it was time to pull the figures from their holding containers and hold a review. 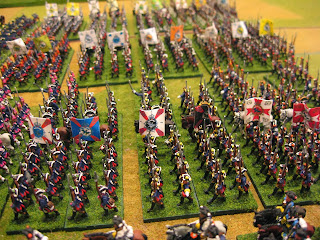 This project began as a means to satisfy my curiosity to purchase and paint a few Austrian battalions from Eureka's 18mm range.  My original intention was not to produce a gameable collection.  In the past, I had painted and fielded two SYW armies in 15mm using Old Glory figures.  During a desire to field 15mm Russians Napoleonics quickly, I traded the collection away in exchange for Russians.  I know, I know; I should have kept the SYW figures since they were painted to a higher quality than those Russians I received.  Also, I wouldn't need to begin again from scratch.  That is another story, though.

In an attempt to qualify the stages of this project and provide a bit of history, I pulled data from the Painting Log and constructed the following graphic. 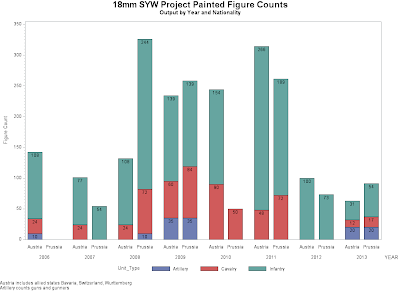 In 2006, I purchased a few regiments of Austrians to field a small, "sample" contingent.  At that time, I had no plan to turn this into a full-fledged project.  In 2007, I continued fielding more Austrians.  At some point, the draw to paint Prussian opposition overcame my original goal and a few Prussians were purchased and painted.  In 2008 and 2009, my thinking likely switched from the notion of fielding a "simple collection" to "hey, why not build two forces to game with!"

2010 saw the Austrians add allied foot support and an escalation of the cavalry and artillery arms for both Austrian and Prussia.  Another high output year occurred in 2011 seeing many new infantry regiments mustering out from their billets.  Productivity dropped in 2012 and 2013 as other "more pressing" projects came to the fore.

Now, on to some photos of the collection.