After the painting surge to field the collections for a game in early 2013, no 28mm AWI unit has seen the paint brush.  In an attempt to go back and pick off some low hanging fruit from the painting queue,  six British skirmishers made it off from the painting desk.  These six figures were part of the planned Saratoga group project that ground to a halt when one of the triumvirate lost interest and then moved away.  Scott ended up with Austin's unpainted British contingent lead and I later traded away bags of AB Napoleonics for these Perry AWI figures.

The skirmishers were already primed black when I got them so I only needed to lay down a coat of paint.  With only six figures, I completed them in little time. 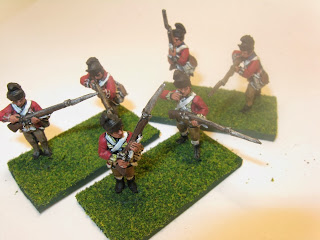 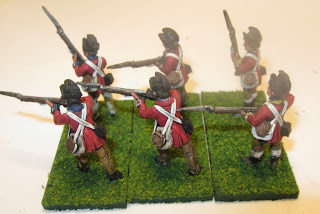 As I worked on these, I thought why not paint another infantry regiment while the British AWI uniform is still fresh in mind?  Why not, indeed!  Into the painting queue went 20 British foot.  Rather than Perry figures proper, I dug into the lead pile and pulled out Foundry British in the 1768 Warrant.  Of course, the Foundry figures were sculpted by the Perry brothers so they will fit in perfectly.  I hope uniform details do not fade before I can get these British from the painting queue to the painting desk.
Posted by Jonathan Freitag at 5:28 PM