From Pike To Bayonet: A Battle Report

Tuesday's remote game was a return to playtesting Graham's late 17th/early 18th  Century rules.  This time, the battle was set in the 1690s Low Countries where an Anglo-Dutch force faced off against a French force.  The objective was to take control of the bridge separating the two armies.  Troop quality is unknown until contact with the enemy.  How good or how reliable will our troops be on the day of battle?  No one knows with certainty.

Since I would be commanding the French right wing, I switched webcams from the lead camera view (opening game photo) to better see my troops.  The French Army is attacking from top to bottom with the Anglo-Dutch attacking from bottom to top.  The ruined bridge in the foreground is not a meaningful objective.

How did the battle play?

At this point, the battle was called due to time.  After about four hours of play, two Anglo-Dutch infantry regiments were in flight and a third regiment was being pushed back.  For the French, two cavalry regiments had fled the battlefield and two infantry regiments were being pushed back.  With neither army broken, Graham declared the battle a draw.  With both armies only approaching the halfway mark to becoming broken, a draw seemed a reasonable outcome given the situation, I thought.
The hard-charging French were not as effective as I hoped and the Anglo-Dutch platoon-firing infantry was more effective than I feared.  With rules in flux, just when one sees workable tactics beginning to formulate and gel, the next rules' iteration throws much of that discovery out of the window.  We begin again from Ground Zero.  Well, not quite Ground Zero but you get the impression.
There are a couple of assumptions in the rules requiring more of my thought.  I am sure these curiosities will be addressed in time but for now, they are puzzling.  In the remainder of this post, I tackle one as I work through the problem.
What is the source of one of the puzzlements?  Initiative determination.  The assignment of initiative at the beginning of each turn has the potential to have an outsized influence on the game.  The turn-starting rule on initiative determination drives the sequence of play.  The player winning initiative has a choice of moving and fighting first in the turn or second.  With that choice, a player could choose to activate second in one player turn.  Then if initiative is won in the next turn, that same player could move first.  This result allows one player the opportunity to activate his army twice in a row.  That is, the army activates second in one turn and then activates first in the following turn.  In Tuesday's battle, the Anglo-Dutch army managed to pull this off twice producing back to back activations two times during the game.  Two sequential activations manifests an advantage; sometimes huge.  An advantage that is difficult if not impossible to counter.
The probability of a double activation is actually increased by the nature of the initiative roll.  The player that loses initiative in one turn is more likely to win initiative the next.  The +1DRM to the initiative loser reduces the likelihood that one side can dominate initiative by allowing the initiative loser a better chance to snatch it away next turn.  True.
All things equal, what the game ends up with is a negative serial correlation to the prior turn's initiative holder.  This seems to violate Newton's First Law of Motion.  In physics, a body in motion tends to remain that way unless an outside force acts upon it.  Given that, an army in motion (holding initiative) ought not be less likely to maintain that motion than its opponent.  Better to have theory on your side, I think.  Taking the initiative should be rewarded; not punished.
Now that this is identified, what are possible solutions to address this +1DRM Initiative bonus to the prior turn's initiative loser?
First, drop the "+1DRM if lost last initiative."
Since the Initiative Roll already modifies the die roll by commander quality, keep that in place since better generals ought to have a better chance of seizing and maintaining the initiative.  If you want to stop there, that is fine and provides a workable, theoretically sound solution.
Let us not stop there, though.  A more interesting solution is to add,
"+1DRM if moved first last turn."
What does this addition accomplish?
Say, Player 1 wins the initiative and decides to move first.  Player 1 moves first and Player 2 moves second.  Since Player 1 moved first, the initiative rests with Player 1 this turn.  Next turn, the probability of Player 1 maintaining the initiative is increased by +1DRM.
What if Player 1 wins initiative and decides to move second?  Now, Player 2 moves first and Player 1 moves second.  Player 1 has relinquished the initiative to Player 2.  Next turn, Player 2 has an advantage in attempting to hold the initiative with a +1DRM.  Player 1 not only gave up initiative this turn by choosing to move second but has allowed his opponent an opportunity to maintain this initiative next turn (and subsequent turns) with increased probability.
Now, there is a reward for maintaining the initiative and a cost for giving it up.  As a bonus, no Newtonian law is violated in the process.  Of course, the opposing player could still out roll the initiative holding player despite the +1DRM and snatch the initiative anyway.  With no modifiers, the player not holding the initiative will win initiative 15/36 times. With a +1DRM, the player without initiative will win the comparison toss, 10/36 times.  Maintaining the initiative once taken is no sure thing.
I welcome comments on the original Initiative determination scheme as well as my suggested amendments.
I end with a few photos of the Spokane skyline, Lower Falls and Upper Falls snapped during Thursday's ride.  Weather remains perfect. 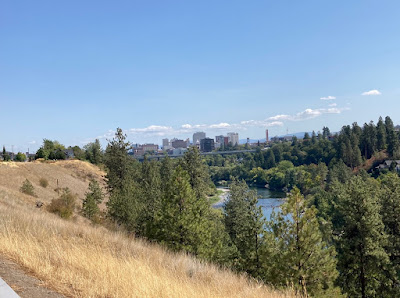 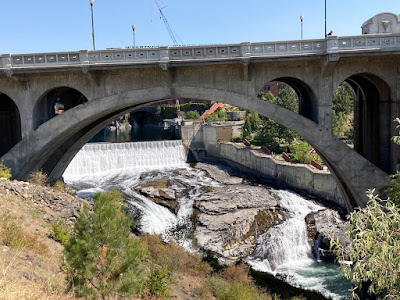 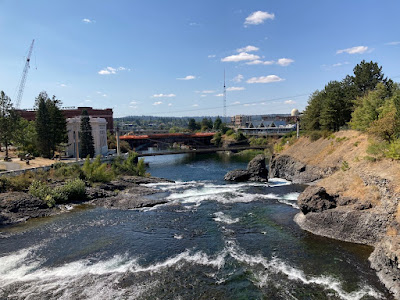