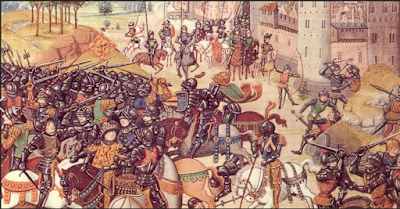 Two weeks ago, Richard hosted a hybrid game in which half of the participants were in his game room and the other half were joining in remotely. The battle under consideration on this day was the 1346 Battle of Neville's Cross.

Before game day, Richard assigned overall commanders.  I would play the role of Robert, positioned with the King, in the Scottish army.  Each commander received a battle briefing and I assume a battle sketch map.  My briefing suggested that,

Your scouts have produced the following map. The Scots have been camped in the Prince Bishop's manor park of Beaurepaire, or Bearpark, from where they have been collecting payments in return for agreeing not to plunder surrounding towns and villages. The English have appeared from the south and face them across a fairly narrow ridge with steep scarps on both sides.

The previous day, Scottish scouts were surprised to come across the vanguard of the English army and were beaten off with significant casualties. This was a shock to the young Scottish King, but the army facing him is smaller than is own and is made up from those King Edward left behind when he sailed for France.

Robert's address to the Scottish army before the battle was,

I suggest we allow the English to advance upon our positions.  We can attack after the enemy has been softened and constrained by the narrowness of the ridge.

With that, the Battles deployed behind the hedge offer up a steady missile fire upon approaching English while Steward advances cautiously toward the narrow ridgeline while keeping his left secured to the scarp.  Once lead elements of English reach the narrow ridge and attempt to emerge, Steward should attack vigorously.  Moray and Robert will follow-up in support to drive the English from the field.

If only two of the three English battles remain in the fields to our front, then expect treachery against our right.  If all three dare not oblige by moving toward our positions via the plateau then a defensive battle must be fought.  In this case, Moray to move to his right taking up position in the hedge along the road to cover the road and discourage attacks against our right.  Be vigilant of the possibility of flanking maneuver against our right from the road on the escarpment.  Robert and Steward to take up defensive positions behind the hedge and wait for the English.  Attack if numbers are favorable.

Well, Robert's battle plan was torn asunder from the start when the King ordered the Scots to advance across the hedge and engage the English.  Sigh.
On to Battle!
A Glorious Victory to the Scots and history is reversed!
The battle offered up a quick and sharp action with the battle decided in relatively short order.  The key to battle was Steward's actions on the Scottish left.  He advanced quickly as planned and delivered devastating blows to Neville.  I am not sure Neville knew what hit him.  Steward saw some incredible luck with the dice but I say it is better to be lucky than good.
Great fun and thanks to Richard for hosting!
Posted by Jonathan Freitag at 9:24 AM