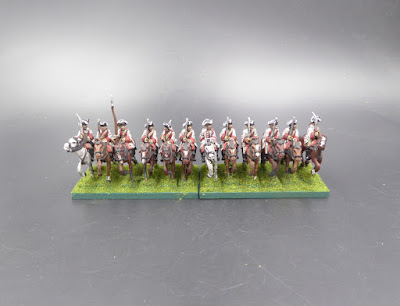 Not much activity at the painting desk this week past.  Many diversions distracted me from enjoying meaningful painting sessions.  First, weather has been splendid.  Mileage on the bike is ramping up to a more 'summer-like' level.  The increases in mileage do have their downside.  I feel a bit more fatigued after several days out.  Sunday afternoon's thunderstorms allowed me to take a day off from the bike.  Still, I did not manage to slip in any meaningful painting but there is always another day.

Second, finishing up the San Martino group game on Tuesday and then writing up the battle report on Wednesday and Thursday consumed prime hobby time before the holiday weekend.  While drafting the San Martino battle report, thoughts returned again to the usefulness of these After Action Reports.  I do enjoy chronicling these battlefield exploits, but they often represent a sizable slice of time to curate and draft.  Do readers read these accounts in entirety or skim to the end?  This topic comes to the fore with each battle report published.  Perhaps, I ought to formalize my thoughts on battle report usefulness in a separate post?

Finally, I have been researching and planning for the next scenario.  With the help of André (Wackershofen Anno Domini), I am using his 1745 Battle of Bassignana scenario as a starting point for my own interpretation of this WAS battle.  Hopefully, the scenario will be set in place within a fortnight.  Table is being laid out now.  I need to build a pontoon bridge for this action. 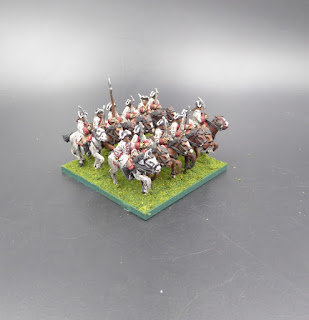 Enough with the excuses for my lack of painting.  I did manage to push out one more French cavalry unit this week.  For those keeping count, this is regiment #7 of the seven cavalry BMU target I set for myself.  Next up are French command stands for my fledging little French army.  The French will make their first appearance at Bassignana.  Figures are Eureka Miniatures. 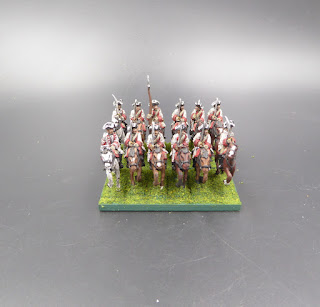 After a long break, Matt (Wargamesinthedungeon) and I saw a return to our very long-running AWI campaign using Rebels & Patriots on Sunday.  Sunday's action saw the recreation of the last of the 1777 Forage Wars.  Details on that closely contested action to follow.
Posted by Jonathan Freitag at 7:23 PM