Look! I Painted Something! 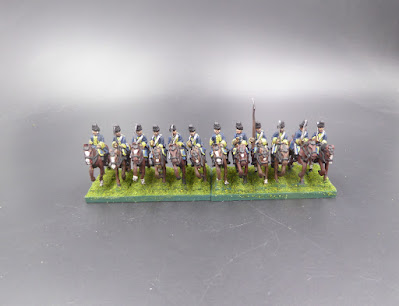 In a tip of the cap to one of Stew's recent ramblings on blog content at A Terrible Loss of Lead and Wealth, I offer up a Look - I painted something post.

Mustering out from the painting desk today are a dozen horsemen from the French Raugrave Cavalerie Regiment.  Figures are from Eureka Miniatures. 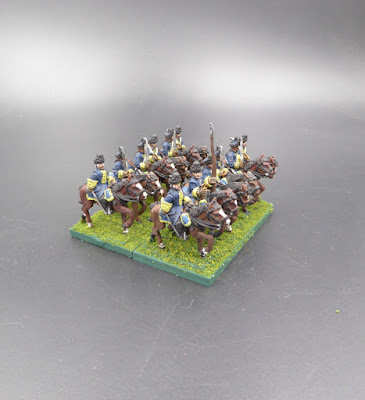 I thought these were the last of the French cavalry figures from my big Christmas restock of Eureka Miniatures back in December.  As is often the case, I was wrong.  A careful rummage through The Lead Pile surfaced another dozen French cavalry troopers.  Hooray!  These newly-found figures will go into the production queue with a goal of mustering out as the Colonel-General Cavalerie Regiment.  Inspired by David's recent, superb flagwork for this regiment (see French Cavalry Standards - Colonel-General Cavalerie Regiment), a redcoated regiment is just what I need. 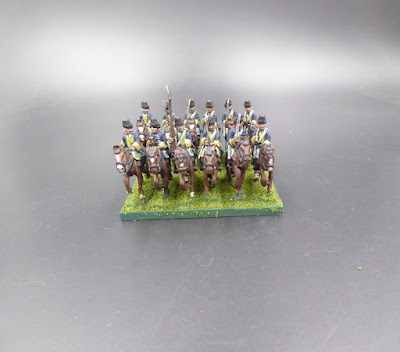 Speaking of David's superb flagwork, his barrage of cavalry flags led to a series of misfortunes on Saturday.
With enough newly raised regiments to warrant printing up another flag set, I set to work creating the set of flags.  With the sheet finished, the flagsheet was sent to the printer.  The flags printed but the color blue was not rendering.  Was the color cartridge out of ink?  The printer status suggested the cartridge was still mostly full.  Hmm.  Were the printer heads or cartridge contacts plugged?  They all looked OK but I gave each a good swab anyway.  I tried again.  Still not blue. Perhaps the printer heads were misaligned?  I aligned them.  Nope still no color.
Off to the store for new ink cartridges.  Back again.  Still no color.  Sigh.  A call to tech support suggested that the printer heads were damaged and ought to be serviced and replaced.  Well, the cost of sending the printer out for repair was almost the equivalent cost to purchasing a new printer.  What did I do? Purchasing a new printer seemed reasonable.
With an in-house supply of ink cartridges, I wanted to purchase a printer with the same ink cartridge specs.  Having found several contenders, I went out to buy one.  The store had the correct printer so I bought one and brought it home.
Installation became a small nightmare as the printer screen kept issuing a "Printer photo tray" blocked error.  No way past this error and the tray showed no sign of blockage or jam ("jam"?  is this another variation on Stew's PB&J posts?).  I digress...
Another call to tech support in Bangalore was met with a long pause as "Bob" searched the printer knowledge base.  After several minutes wait, Bob came back onto the line to say that the tray is defective.  Return the printer to the store from which I purchased it and get another.  Oh, and good luck!
Well, back to the store I go with the inoperative printer in the opened box.  After I explained the situation and my call to India, the guy in customer service said, "let's get you a new one."  After exchanging printers, back home I went with the new package.
After unpacking and setting the new printer up, installation began.  Less than 15 minutes later, the new printer was being put through its paces on diagnostics and printing test pages.  All is working but duty calls to other pressing matters like preparing dinner for guests.
Now, time to give the new printer a test run with an assortment of Dave's flags.
Whew!
Posted by Jonathan Freitag at 12:09 PM