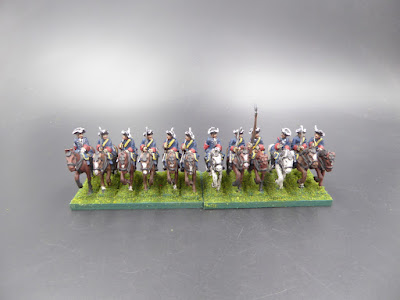 Work on fielding SYW French cavalry continues.  With seven cavalry regiments planned in the first tranche of cavalry for the burgeoning French army, today's effort makes up #5.  Two more to go.  These dozen horsemen muster out as Royal-Pologne.  Figures are Eureka Miniatures. 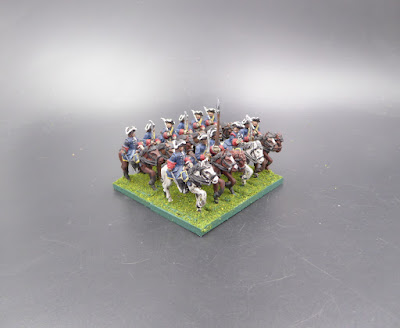 Seemingly on the Home Stretch of the French army build-up, I remembered that these fine Frenchmen would require general staff to lead them.  This realization will set the timetable back a bit but I have mounted officers in the painting queue.  I am getting close to mustering-out the first semblance of a French army.

On the gaming front this week, two games are already in the books.

The first game was a remote game on Monday with Mike (Dieroll Volleys) and David (David Grech) as we fought over the ground at San Martino.  This was Mike's first remote game via Zoom and I reckon David's first game too.  Despite one of the cameras having a nagging lag, I thought the game fun.  I need to investigate the root cause of the camera lag and try to resolve that issue before the next game.  More details on the action once I gather the game artifacts in preparation to writing-up a battle report.

The second game was on Tuesday in which my ace pilot took to the skies again for a WWI dogfight.  With four allied planes (two Camels, two 1-1/2 Strutters) against two German fighters (one Fokker Dr1, one DVa), my Dr1 got on the tail of one of the Strutters and shot off the wings.  Hooray!  This may have been kill #8 but I lose track of such matters.
Finally, out on the bike this afternoon to assess the state of the river after several days of heavy rain.  Not surprising, the river is running at flood stage and water is roaring through the center of town and over the falls.  Quite dramatic. 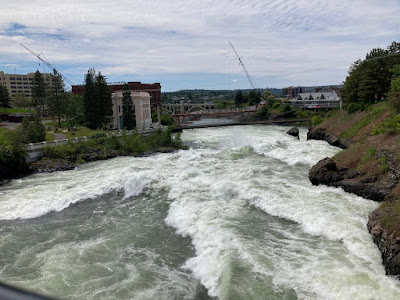 That's enough for today...
Posted by Jonathan Freitag at 5:13 PM