On The Table Today is... 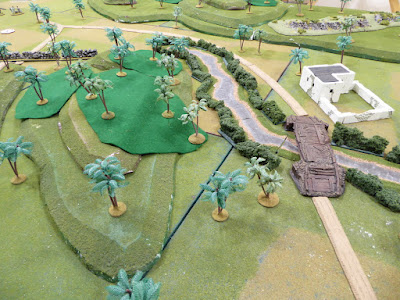 the action at Las Guasimas in Cuba 1898.  Yes, we see Teddy Roosevelt in action with his Rough Riders.
Having fought Mollwitz twice, it was time to clear the table and consider a new topic for a game or two.  Mollwitz replays may not be finished just yet but time to move it along.
Not having seen the Spanish-American War collection out for a game in more years than I can honestly recall (I suppose I could look it up!), I figured an outing was long overdue.  That, and the action could fit onto a 6'x'6 table space which seems to be about the one-stop, coverage limit for two stationary webcams with one placed behind each army's baseline.  Any wider than six feet and the cameras occasionally require a pan left or right to take in the entire battlefield or the two cameras need to be positioned at table corners.

I have yet to select the rules of engagement but likely with proceed with some of my own doing.  That way, I have a better chance of remembering the rules in the heat of a multiplayer, remote battle.  Rules will be worked on this week before presenting the game at the weekly Tuesday game.  Osprey's The Men Who Would Be Kings ruleset is under consideration too, but I may want a bit more flavor and less buckets of dice.  More scenario details to follow before the Tuesday game.

Hopefully, the group will enjoy a change of pace from the regular fare.  The Spanish-American War may not be a period readily gamed by English gamers.  We will see.

While not much painting has been happening on the Home Front, I did manage to push out a unit of 15mm Samurai bowmen.  Figures are Museum Miniatures. 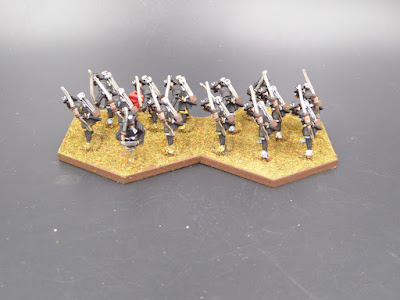 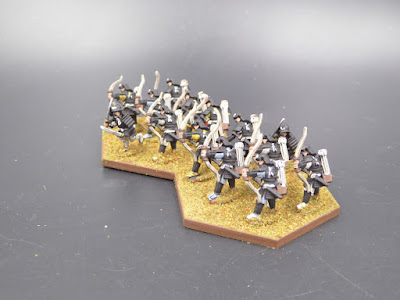 Several units are making their way through the painting queue but not much to show yet.  Soon, I think.
Posted by Jonathan Freitag at 12:00 AM