Having taken up a short residence at the Venetian Resort in Las Vegas this past week, no gaming or painting activities were seen on the hobby front.  I did manage to put together a Spanish-American War scenario and Rules of Engagement for an upcoming game while away.  Amazing how much work can actually get accomplished on the plane and sitting poolside.

Anyway, a QRS is finished for Tuesday's remote group game and a scenario laid out.  Still time to make a few adjustments to the QRS if needed before Game Day.

The action at Las Guasimas was the first substantial land encounter between the US and Spain at the start of the war. After landing at Siborney, “Fighting Joe” Wheeler (an ex-Confederate cavalry commander), the senior American officer on the ground received reports from local Cuban rebels of the Spanish dispositions around Siborney. On the 23rd, Cuban forces had contacted the Spanish around Las Guasimas but were driven back. The Cubans reported that the enemy was digging in field guns on the heights.

Wheeler, ordered not to bring on an engagement with the enemy until the Siborney landings were completed and the Cubans were in position to assist, decided to launch a reconnaissance in force on the 24th regardless. With the Cubans in a flanking position, the attack was planned to push down the road toward Santiago de Cuba and drive the Spanish from the field.

To accomplish this task, Wheeler’s 2nd Brigade of the Cavalry Division would strike out toward Las Guasimas. Young’s brigade would attack up the Siborney-Santiago Road toward Las Guasimas Creek and pin the Spanish in place against the foothills. Wood’s 1st US Volunteer Cavalry would march up the trail along the saddle and flank the enemy from the west. The Cubans, on Young’s right, would turn the enemy’s left. With both flanks in jeopardy, this maneuver was expected to dislodge the Spanish from the foothills and force a retreat back to Santiago.

The Spanish commander at Sevilla, General Rubin, was tasked with conducting a fighting withdrawal back to Santiago. Rubin’s main objective was to buy enough time to allow the evacuation of a hospital train traveling on the road back to Santiago. He could not risk having the hospital train fall into American hands. To this end, trenches had been dug across the trail near the junction with the Siborney-Santiago Road and rifle pits had been dug on the high ground escarpment overlooking the main road. Spanish forces may deploy anywhere behind the yellow line on game map.

On the morning of the 24th, Wheeler set elements of his division into motion. With reports of activity on the foothills, Wheeler was unsure if the activity was from the Cubans who were expected from that direction or the enemy. Young positioned a gun on a hillock to the southwest and directed the firing of the piece at the hill in the distance to confirm. When these ranging shots were answered by 75mm Krupp Mountain guns, the action was on. Unfortunately for Wheeler, there were no Cubans on his right.
Order of Battle 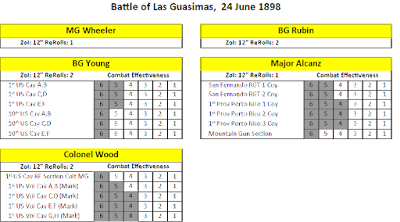 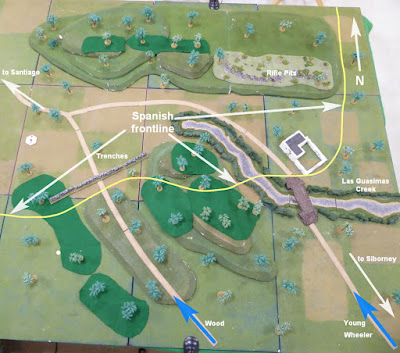 Victory Conditions
It takes 10 turns for the hospital train to exit the table on the road to Santiago. Spanish units begin unspotted.

American player has Initiative on Turn 1.
There are a few details left out of briefing to be shared with the commanders prior to game time.
Back to the week in Las Vegas...
The trip to Las Vegas was the first air travel undertaken in more than two years for me.  To enjoy sunny skies, the heat of 85-90F temperatures, good food and a concert, Nancy and I jetted off to stake out a short, four-day stay in Sin City.  Unbeknownst to us at the time, this week also coincided with the annual NFL Draft.  Who knew that the football draft was such a HUGE event?  We did not, for sure.  A few blocks of Las Vegas Boulevard (The Strip) were even closed down for the festivities.
With a resort named the "Venetian" one might expect a Venice themed complex.  One would not be wrong.  Walking around this faux Venice for four days reminded us how much we enjoyed the real Venice.  Having visited Venice on two of our three Italy trips (2009 and 2016), it may be time to start thinking of a return visit. 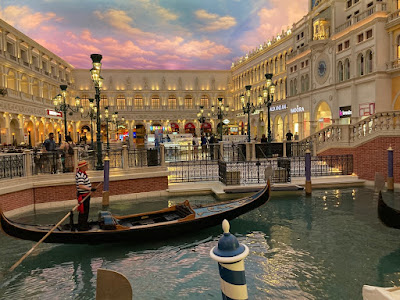 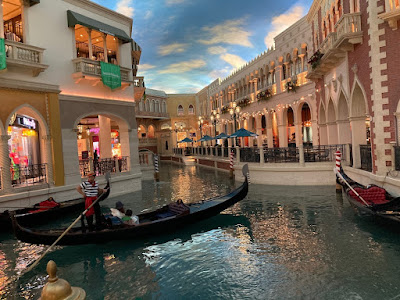 Posted by Jonathan Freitag at 5:22 PM