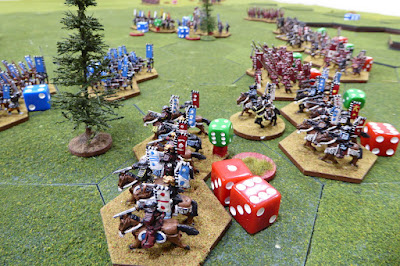 With the Samurai armies deployed for battle and a framework in place to play Basic Impetvs 2.0 (BI2.0) on a hex grid, Peter and I sat down across the remote gaming table.  Peter's seat was in Australia.  My seat was situated in my game room in Washington State 8,400 miles away.

The battle up for a refight was the Second Battle of Azukizaka in 1548.  The force composition and initial deployments came from the Commands & Colors, Samurai Battles website at,

with initial tabletop deployments as,

A brief background on the battle comes from the link above.  It states,

In 1548 Oda Nobuhide led an army into Mikawa, his objective being the Matsudaira’s capital city of Okazaki. Matudaira’s young lord, Hirotada, turned to Imagawa for assistance and agreed to provide his only son as a hostage in return for help, but the child was abducted by the Oda in route. Imagawa Yashimoto still fulfilled the bargain and called on his uncle, monk-general Taigen Sessai, to march out to meet Nobuhide. Sessai set up an ambush of sorts and although the fighting was desperate, Nobuhide was defeated and thus avenged the earlier loss at the same sight some six years previously (Mark McG).

Peter chose to take command of the Oda Clan leaving me in ambush with the Imagawa Clan.  In the game photos, red dice denote current VBU for Imagawa units.  Blue dice denote current VBU for Oda units.  The small green die shows a unit's current Impetvs.
Let's see how the battle developed.
After almost three hours of play, the clock ran out for Oda Nobuhide.  The battle was closely contested throughout play and the outcome was in doubt until the final turn.  With Imagawa Sessai gaining the initiative on Turn 9, he could choose where to attack in order to push Oda Nobuhide over his army's breakpoint.  Had Nobuhide gained initiative on turn 9, the outcome may have been different and the tables turned.
Thanks to Peter for a very enjoyable gaming session.  Peter is a savvy player and picked up the rules quickly.  The initial run-out of the rules worked well even though I made mistakes in some adjudications.  At least these misadjudications were applied evenly to both.  After the game, I re-read the BI2.0 rules and jotted down a few more notes and amended my QRS.
While it has been a very long time since either my Japanese armies or BI have been out for a spin, it was an enjoyable ride.  Great fun, actually.  Round 2 of the Second Battle of Azukizaka is up on the slate for the Tuesday group game.  With rules refreshed in my mind, my adjudications should be less pitted with missteps.
After a second game, I will have a clearer picture of the success of my work on converting Basic Impetvs to a grid.
Expect to see more of these armies in 2022.  Well, at least as long as I can find willing opponents!
Posted by Jonathan Freitag at 8:18 PM