The Year in Review: Games Played

On the gaming front, 2021 turned out to be an extraordinary year.  I participated in more games than ever before.  Games played in 2021 were almost an order or magnitude greater than in past years.  Where a dozen games per year seemed the norm in most years, 2021 ripped away those long-held standards.

Having rarely played more games than can be counted on two hands, I never made any effort in tabulating games played.  With so many games in the books for 2021, inventorying the results seemed a reasonable activity to tackle.  Was I surprised at the tally?

The game count is quite astonishing, really, and these totals do not include many of my solo games, my Rivoli PBeM game, Steve's SCW PBeM campaign, and multiple games in each Commands & Colors' session.  So, total games played is actually under-counted!  The count of games played in 2021 is,

That is correct.  97 games logged.  Much of the gaming increase is due directly to a move to remote gaming via Zoom. 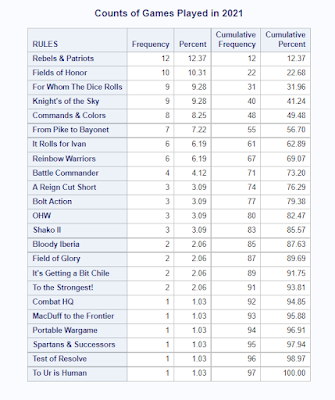 Games were not concentrated in a few genres and rules but a wide assortment of periods, scales, and rules.  The count shows 23 different rulesets hit the table in 2021 with my long-running AWI campaign with Matt leading the way at 12 games.  That is a lot of rules to remember from game to game.

Another look at the rules played, graphically, shows that the top five rulesets of Rebels & Patriots, Fields of Honor, For Whom the Dice Rolls, Knights of the Sky, and Commands & Colors made up almost 50% of games played.

What about figure size or scale?  Was there breadth in that respect too?  Yes, breadth was in abundance.While 15/18mm and 25/28mm may have dominated games played, 1/72 comprised a large percentage of games thanks to Graham's many land games and Richard's numerous air games.Were the games concentrated within a few months or evenly distributed throughout the year?  While the chart above shows spikes of activity where May, August, and October reached 11 games played, most months had at least seven games played. This is a lot of gaming!

Do I expect to see this same level of gaming in 2022?  Not fully understanding how I managed 97 games in 2021, duplicating the 2021 effort in the New Year seems unlikely.  Besides, I have a Lead Pile of unpainted lead to work through.

The next time I return to the yearly review, I dig into the Painting Log and see what 2021 held.

Email ThisBlogThis!Share to TwitterShare to FacebookShare to Pinterest
Labels: Analytics