Following my initial solo game of Two Flags - One Nation (see TF-ON BatRep), the situation for the Action at Mill Creek was reset and played out solitaire a second time.  The Confederate objective is to push two regiments onto the heights while maintaining control of the two road hexes on either end of the bridge spanning Mill Creek.  Any other outcome results in a Union victory.  All of the Confederate forces arrive at 10:00.  The Union player will receive reinforcements beginning on Game Turn 2.  Note that unit disorder is denoted by 'SH' markers on the table.  "Disordered" or "SHaken" close enough, right?  The game spans two hours from 10:00am to 12:00pm with a possible Confederate extension.

The scenario begins with only Federal troops on the table.  Porter's brigade is deployed to the west of the bridge near the copse of trees and Richardson's brigade deployed on the heights overlooking the bridge and creek.
The battle opens at 10:00 with the Confederate division under Elzey entering the table from the south edge.  Federal artillery strikes the first blow by hitting the limbered Confederate guns before they can deploy.  The Reb artillery passes the Capability Test (CT).
10:18. Random Event: Federal General Porter shot dead.  Both regiments of his brigade are disordered until a replacement can be found.  "Pop!"  Right off the bat, Federals witness issues with the fall of Porter from a stray bullet.  Confederate artillery scores a hit on Federal artillery positions while Elzey's division continues its advance upon the bridge.
10:35.  Confederate guns score three hits on the Federal guns on the heights but the Federal gunners hold firm.  Federal guns target the approaching Reb infantry for no noticeable effect.
10:48.  Confederate guns continue pounding the Federal artillery on the heights as the Confederates continue their advance toward Mill Creek.  Federal guns take two hits, fail their Capability Test, and retire, disordered.  Since the guns have five or more heavy casualties, they must take a CT during the Retreat Phase.  This CT they pass.  Note that the guns had to take two CTs.  One CT from casualties suffered from fire and a second CT due to now having 5+ Heavy Casualties.
11:06.  As Confederate infantry step into Mill Creek, Porter's boys pour a hot fire into them.  Regiment nearest the bridge takes two Heavy Casualties but is undaunted.  On the Confederate right, one Rebel regiment takes fire from Federal infantry on the hill.  Light casualties are suffered.  Even though disordered, Federal guns are brought back up on the crest of the hill.

11:23.  Still limbered, the Federal guns are hit again from Confederate artillery fire.  Failing their CT, the guns pack off towards the rear.  As Confederates near the woods on the Confederate left, musketry exchanges increase.  Both sides take casualties but no one backs down.  One of Richardson's regiments advances to cover the threat against the bridge.
11:38.  Having only just moved up to bridge to aid in its defense, Federal troops fall under the sights of Rebel guns and take three hits.  Now within close range of Federal positions, Confederate fire takes its toll on the defenders.  Casualties mount quickly.  The Federal Divisional commander, Schenck, joins Porter's brigade to help stabilize the situation.  No sooner had he joined the regiment than he goes down in a hail of bullets.  The regiment he joined suffers three casualties.  Fighting is getting very hot!
As the supported Rebels charge into the woods to come to grips with the wavering Federal troops, the disordered defenders are unable to release a closing volley.  In the close combat, the attackers suffer three hits but pass their CT.  The defenders take two more casualties and Porter's replacement is killed.  It has been a tough morning for Federal generals.  Failing their CT the defenders take an additional heavy casualty and fall back.  In the Retreat Phase, the Federal artillery is destroyed as it fails a CT and takes one more (the 8th) Heavy Casualty.
With at least two more turns remaining and having suffered heavy casualties, the Federals concede their position and pull back.  With their left crumbling and leaderless what more is expected?  The result is that Elzey holds the field in victory.  The anticipated Federal reinforcements from Keyes' 3rd Brigade never materialized.  On each turn the roll needed for reinforcement arrival was never quite sufficient to bring them on. 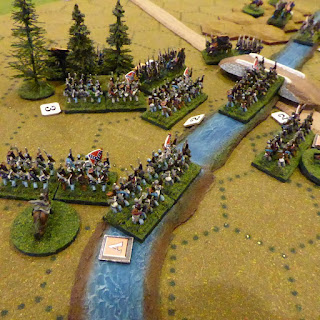 Another interesting and challenging game with a lot of action.  Units took punishment quickly.  Some held, others could not.  The Confederate guns were deadly with their artillery fire this day.  In the end, the early neutralization of the Federal guns, a lack of reinforcements, and the death of three Federal generals likely spelled defeat for the Union.  While Mill Creek was a barrier, it was not much of one as all Confederate regiments passed their CT upon entry.  The creek did slow movement to one hex but with Federal battle lines drawn near the creek not much maneuver was needed to close on the enemy.

After my second game of Two Flags - One Nation, what are my impressions?  My impressions will be addressed after a third game is in the books.  What I can say is that Norm has produced a fun, compact game with a lot of action and tough decisions to make.  Norm responds to rules' questions promptly too.  In the third game, I face off against a Face-to-Face opponent.
Posted by Jonathan Freitag at 12:00 AM