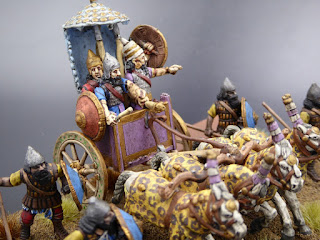 Having refurbished and rebased nine Assyrian chariots over the 2016 Christmas holidays, today I face a dilemma.  My original plan proposed basing each chariot on a one half-sized Impetvs cavalry base of 60mm x 80mm.  Two such stands would be placed together on the table to form one, 120mm x 80mm regular-sized cavalry base.  This original concept is shown in the photo below.
After having based elephants for the Punic Wars project (see Seeing the Elephant) at one elephant per 120mm x 80mm base with runners, I thought this scheme would look good for chariots as well.

As a test, I rebased the King's chariot in this fashion with four heavy infantry flanking the cart.  The result to my eye looks great. 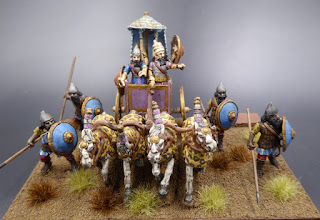 The chariot and crew are Wargames Foundry.  The Assyrian heavy infantry are from BTD.  With no photos of the BTD Assyrian infantry, I was a bit hesitant to order sight unseen.  When the figures arrived, however, I was pleasantly surprised.  The heavy infantry are exquisite!  The BTD shields have been replaced with left over Foundry shields. 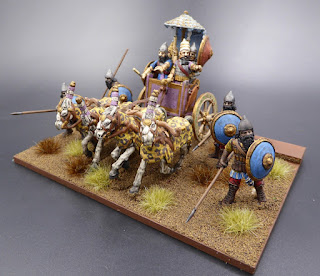 To implement this proposed basing change, more runners will need to jump into the painting queue.  One major benefit of this approach is that the number of chariot BMUs will essentially double.  Yes, double!  That is, the nine chariots can be converted into nine chariots BMUs under Impetvs rather than the four BMUs plus one King's command chariot.

Is the new basing scheme a reasonable choice?
Posted by Jonathan Freitag at 12:00 AM