Switzerland: A Walk in Luzern 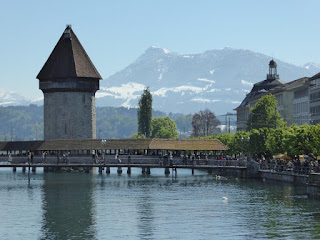 Having arrived from the USA on an overnight flight to Zurich, we immediately grabbed our bags and headed to the train station within the air terminal to purchase Swiss Travel Passes and board a mid morning train to Luzern.

Arriving in Luzern about noon, we walked the few blocks from the train station in search of our hotel a block from the Chapel Bridge.  The tower guarding the Chapel Bridge was the first sight seen after exiting the hotel and turning north.  Spectacular!  We experienced a bright sunny day in late April as a bonus.
Feeling a bit fatigued, our first day in Luzern would be an easy one so that we could accommodate the effects of jet lag.  From the West Coast of the USA to Zurich is a LONG flight!  Our plan for this first half day was a walk around Old Town including a brief visit to the Lion's Monument, the Bourbaki Panorama (see Bourbaki Panorama), and the Depot History Museum.
The Lion's Monument was about a twenty minute walk from the hotel and we crossed the Reuss River using the Chapel Bridge to reach Old Town.  Meandering through the winding streets, we followed the old town wall to reach the Lowenplatz.  Along the way, several notable buildings were passed before reaching the quiet confines of the Lion Monument park. 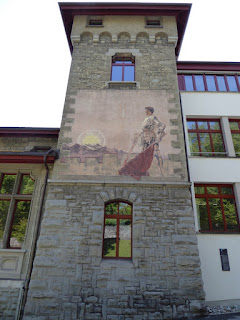 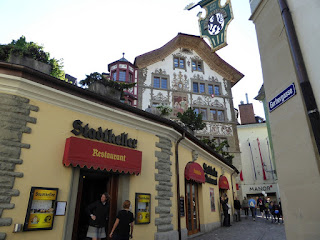 The Lion Monument is a striking sight and measures 33 feet long by 20 feet tall.  The sculpture honors the Swiss mercenaries killed or executed defending the French king during the French Revolution.  The engraving, difficult to read in the photo, reads, "Helvetiorum fidei ac virtuti."  That inscription translates to "To the loyalty and bravery of the Swiss."  Moving stuff.  Luckily, we had the park to ourselves so unobstructed views were achievable.
Having spent ample time gazing at the monument and a short rest, we struck off back towards the river, our hotel, and the Depot History Museum.

The museum is housed in an old three story building on the riverfront.  The collections are an eclectic mix of stained glass, furniture, uniforms, arms and armor, paintings, tourism posters, and even a display of antique toy soldiers.  "Depot" is a fitting term for this museum.  No finely created artifact displays.  A real industrial look to the whole concept.  This seems to be a storage place for artifacts not having a permanent home yet too interesting or historical to throw out.  Many of the items are either behind glass or bars making photography and careful study difficult.  An interesting display easily worth a forty-minute browse.
After spending sufficient time investigating the Depot Museum, we followed the river down to the waterfront for a look at the lake before heading back to the hotel. 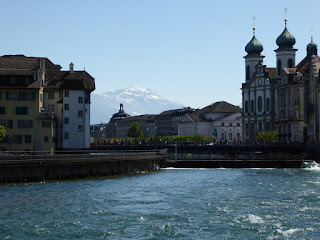 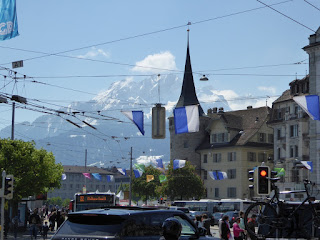 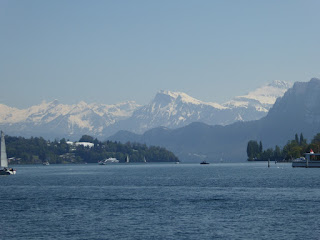 Next time, we travel to the Berner Oberland with a two-day base at Lauterbrunnen.
Posted by Jonathan Freitag at 5:15 AM