Having been following Norm Smith's progress of his grid-based, ACW game, Two Flags - One Nation rules on his Battlefields & Warriors blog, I finally took the plunge and downloaded his latest edition (JUN2017).

Even though Norm provides the rules freely, "free" is no indication of the quality of the writing, layout, or game play.  First rate effort loaded with helpful diagrams and descriptions.

After having read through the rules and making annotations as I went, Norm quickly provided answers to questions raised.  With those clarifications settled, I set up my hex mat used for Commands & Colors: Ancients, pulled out my 10mm ACW collection, and deployed figures to refight Norm's introductory game of Action at Mill Creek.  Now, mistakes were made in my initial game.  Nevertheless, the game was enjoyable and game play subtlety surfaced early on.  None of the mistakes likely materially effected the outcome and errors were probably made equally for both combatants.  The exercise provided a good, first glance, understanding of the game mechanisms.

This posting is not a rule review since that requires more than one game to allow the system and proper tactics to evolve in my mind.  What follows, then, is my stumbling through my first game of Two Flags - One Nation.

At start, the Federals have free deployment on the north side of the creek while the Rebels begin off board. 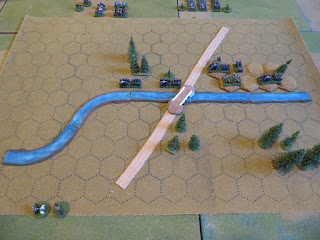 10:00: Confederates march onto the battlefield in line.  The chit labeled 'A' denotes a unit with smoothbore muskets.  All other units carry rifled muskets.  Weapons are randomly assigned for each regiment before play begins.  Federals remain silent as the enemy is beyond range. 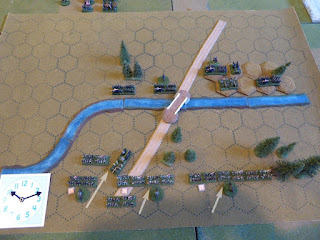 10:12: Confederates roll an event of "Confused."  One unit is Out of Command denoted by yellow ball.  Not off to a coordinated start for the Rebels.  Remainder of Confederate command advances on Federal positions.  Federal guns on heights take a shot and score one hit.  Reb unit passes its Cohesion Test (CT). 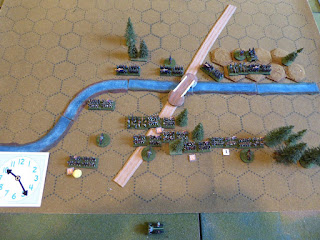 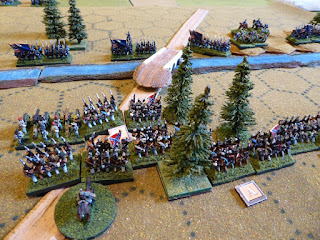 10:24: Notice that the turn interval has been 12 minutes for the first two turns.  Purely coincidence.  Turn duration has a fixed and random component.  An interesting design twist, I think.

Reb artillery fires on Federal positions to no effect as one regiment wades into the creek in an attempt to outflank the Federal right.  Federals roll an "Adjust Line" event and artillery continues to pound the center Rebel unit.  The Reb regiment suffers two more hits but continues to hold its ground. 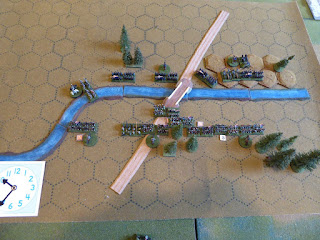 10:36:  Event "Inspiring Federal Leadership" drawn.  With no casualties, no effect.  Rebel artillery targets drives the defending Federal regiment back from the creek and into the woods.  The unit falls back one hex in disorder having suffered one hit.  It will remain disordered for 15 minutes.  Confederates splash into the creek near the bridge. 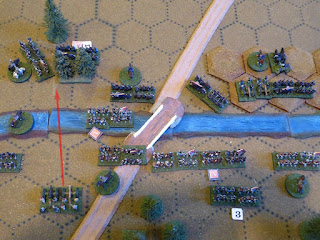 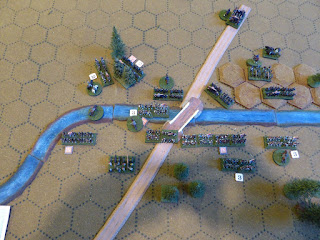 Rebel artillery continues pounding the disordered regiment in the woods as a Rebel infantry regiment prepares to attack.  The artillery causes one more hit and the Federal regiment's disorder duration is extended to 11:01. 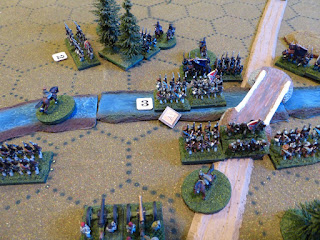 Two Rebel assaults:
In the assault against the Federals in the woods, the Federals suffer one more hit while the Rebels suffer none.  The cover offered by the woods held the Federal casualties to only one when three could have been inflicted in the open. 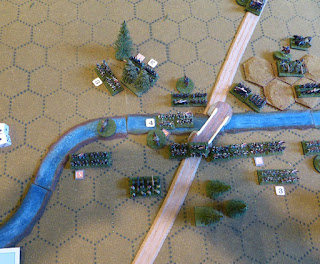 In the assault across the creek, Rebels suffer one hit from fire bringing the casualty count to four.  In the close assault, the Rebels take three more hits while the Federals suffer two. The Confederate Brigadier is killed in the close combat. 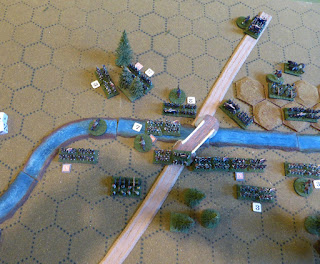 With the loss of their leader, the Confederate brigade becomes shaken.  Having manhandled the guns back into a suitable firing position, Federal infantry come down from the heights to confront the weakening enemy. 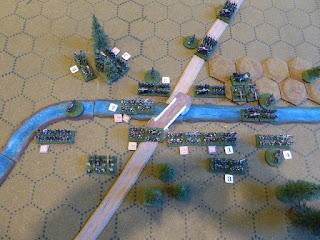 In the post combat CT, the Rebs in the stream fail their check, take one more hit and are dispersed having sustained a total of eight hits. 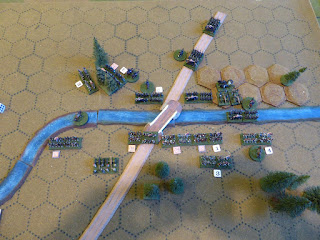 11:07: Reb artillery targets the regiment near the bridge and inflicts two hits. Seeing the Federals at four hits, the Confederates charge.  The defender fails his CT becoming disordered but holds his ground. 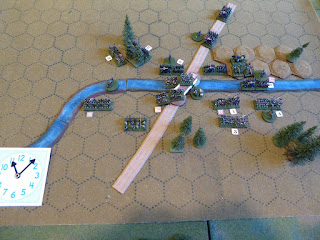 In the close combat, the Rebs take one hit to the Federals three.  The Federal regiment is on the verge of collapse with seven hits. 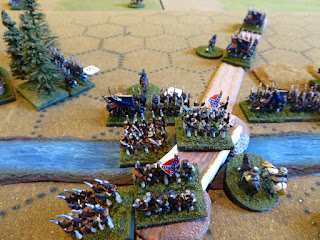 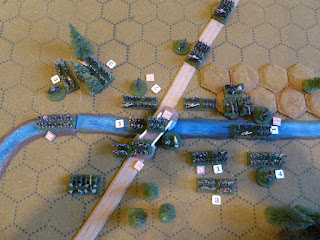 While the Federal regiment holds on by its fingertips, the Rebs fail their CT and fall back taking one more hit. 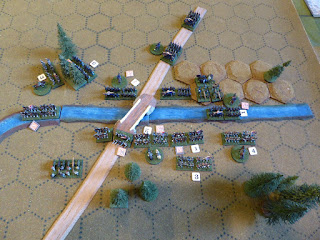 Rebs on the north bank of the creek come under heavy fire, taking three hits.  They retire to join their supporting comrades. 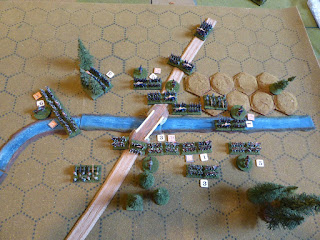 11:22: Having sustained heavy casualties in the advance and ensuing clash with the Federals defending the stream, Confederate BG Elzey calls off the attack as Federal reinforcements are flowing towards the bridge to shore up the Federal center.  With little chance of breaking through with additional assaults, BG Elzey makes a reasoned choice. 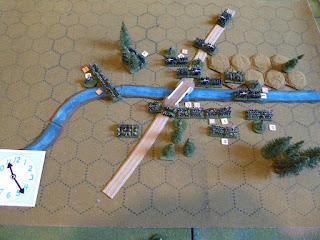 That was a fun, interesting, and tense little game fought in tight quarters!  With a small battlefield and less than ten units per side, every unit's performance was important.  The Confederates took too many casualties on closing and while it looked like the Federal right flank might collapse, it held.  Coupled with punishment taken by the Confederate center and right, little chance of success when game was declared a Federal victory.

To better plan and familiarize myself for my next game, work on a QRS is in progress.  During this first game, I found myself thumbing through the rules in search of answers. Norm provides a functional QRS but it helps solidify game concepts to build a QRS myself.

Nifty game that I will return to again.  I wonder if more prepared ACW scenarios exist?  Norm?
Posted by Jonathan Freitag at 9:26 PM