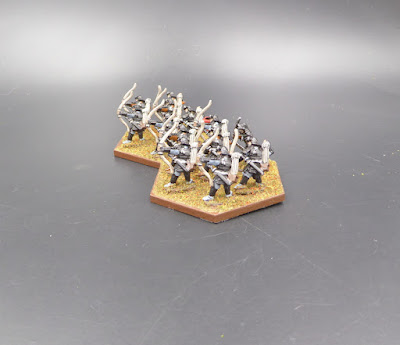 As a brief intermission between fielding SYW French, off from the painting desk today is a unit of Samurai bowmen.  These 15mm figures are from Museum Miniatures were part of a holiday sale pick-up in January.  Great figures with excellent sculpting.  Still more cavalry and teppo remain to push into the painting queue when I need a change of pace. 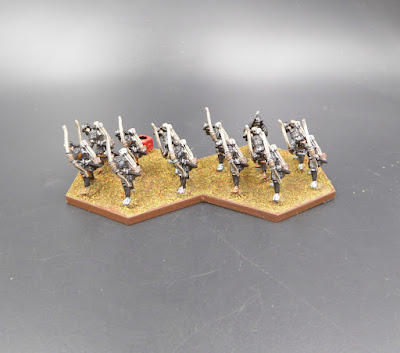 SYW French remain a dominant sight in the painting queue although another diversion is in work.  A dig through The Lead Pile surfaced a box of TAG Thirty Years War/ ECW figures.  Both infantry and cavalry were rediscovered in the mix.  Nine of the horsemen were gathered up and primered in preparation for seeing some action at the painting desk.  After the next SYW French infantry musters out, I expect these cavalry troopers will be next on the scene. 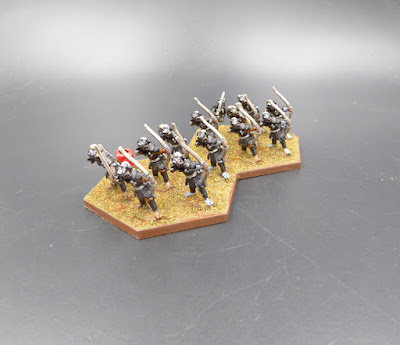 Gaming remains afoot including an introduction of Commands & Colors Ancients (CCA) to a fantasy gamer.  Yes, indeed!  I enticed a Warhammer 40k player to give historicals a try.
Having replayed Caralis 215BC a number of times and finding it always to produce a close game, I put that out on the table for a refight in 6mm.
My opponent chose to command Carthage and after a brief overview of the rules, we set to combat.  Logan began the game in a blaze of successes.  Quickly opening up the center, I found Rome down 5 banners to nil.  Rome recovered.  By endgame, Rome stood on a 7-6 advantage.  In one last grand cavalry charge, Carthage took out two severely weakened Roman infantry units in the center to claim victory.  It was a terrific Carthaginian victory.  Even better, my WH40k opponent enjoyed the game and is looking forward to more historical CCA games.
Score!
Up on Graham's gaming table for Tuesday is a rematch of last week's RCW battle.  Players are switching sides and plotting new battle plans.
Posted by Jonathan Freitag at 3:37 PM