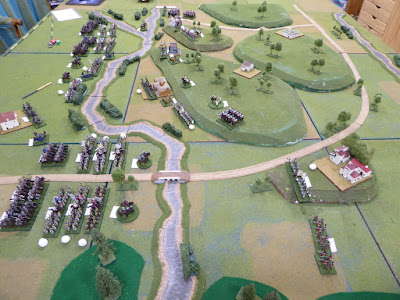 Having led the Piedmonteses and Austrian armies to ignominious defeat last week to Matt (see There Was Such Great Promise) including the loss of King Emanuele III, I took to the field again.  This time, my Piedmontese/Austrian army would face Peter (see A Remote Wargame - Battle of Bassignana) on the fields of Bassignana.

Would I meet the same fate?

As a reminder, army dispositions and battlefield are illustrated in the photo below:

Could I correct for the mistakes made in the previous battle?  Could I change my approach to the defense of Bassignana faced with seemingly overwhelming odds?

In all previous battles, the Piedmontese positions as Chiesa de San Germano and Montecastelle stood firm.  No French attacks could dislodge the defenders.  With little progess by the French against these fortified positions, I figured them to be relatively secure. So secure, in fact, that the defenders tore great swaths out of the French as they attacked up hill.  Unfortunately, there was no reserve at hand with which to capitalize on this success.

The dragoons, under Liguane, maneuvered in my game with Matt to always be nowhere rather than somewhere.  They were marched along the road to the north in support of Bassignana.  Liguane never reached Bassignana before the battle was decided.  This time, Liguane would maintain his position on the right flank to take advantage of any opportunities that might arise.

De la Chiesa's position at Rivarone looked too exposed to me.  As a salient, he may have slowed the attacks but his position and his brigade were eventually overrun.  I needed to try a different approach here.

Let's see if any of this worked against my Australian opponent.

Faced with setbacks all across the battlefield, King Emanuele III sees the handwriting on the wall.  He orders the remants of his army to disengage and retire across the Po.  Hopefully, to safety!
When play stopped, the Franco-Spanish had not yet broken the Piedmontese army or taken all of the objectives to score a Major Victory.  Nevertheless, with all of the independent Piedmontese units destroyed, de la Chiesa's Brigade broken, and D'Aix's Brigade teetering on the edge, the result is without doubt.  Austrian cavalry were only now beginning to appear on the banks of the Po.  Their arrival would be too late.
Major Victory scored by Peter and his Franco-Spanish army.  Congratulations and well done!  The historical outcome is reaffirmed again in another fun and challenging contest.
Game time:  About three hours.
Time to sit down and ponder a retrospective on my crushing defeat.  Sigh.
Posted by Jonathan Freitag at 2:11 PM