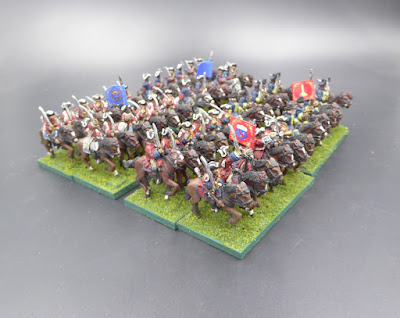 One of the early decisions made when I sat down to plan a French army was what to do about cavalry standard bearers.  Do I order one standard bearer for every unit I plan to field, some of the units, or none?  Since I had no French cavalry flags at the ready, the decision was to include standard bearers for perhaps half of the units.  Standard bearers with no flag look a bit forlorn.  I should know.  Most of my SYW cavalry have no banners waving in the breeze.  Armed with that decision, I sat down to make up the Christmas order to Eureka Miniatures.  As I type out these words, memories of poring over the pages of the Christmas catalog and making lists come rushing back.  Oh the joy!  Not much difference with the exception that fifty years have passed since those formative days.

Anyway, having recently completed the first tranche of French cavalry units to field for Bassignana (up to seven units now), David (Not by Appointment blog) asked if some French cavalry flags would interest me.  Of course, they would!  Having seemingly kept a watchful eye on the mustering out of my French cavalry on the blog, I received an email with the standard for one of my recently released units.  After an exchange of emails, another flag for one of my units appeared.  And another.  And another.  David was creating these little masterpieces at a rate unsustainable to my painting throughput.  I may have more French cavalry banners than I do painted cavalry units; or unpainted ones!  This is especially true since not all of my painted cavalry units field a standard bearer.

In talking with David, one of his concerns is the small size of the cavalry banners.  He much prefers seeing the large flags of the infantry regiments.  Yes, cavalry banners are much smaller than their foot colleagues by design.  This concern is pronounced with flags for 15mm figures when compared to 25/28mm figures.  With Eureka cavalry, this is even more pronounced.  Many of the Eureka cavalry have short standards.  No space on the pole to attach a larger flag without replacing the pole.

Would much of the detail put into a cavalry banner be lost to the eye when printing and when displayed upon the gaming table?  Judge for yourself on four of the newly flagged cavalry units. 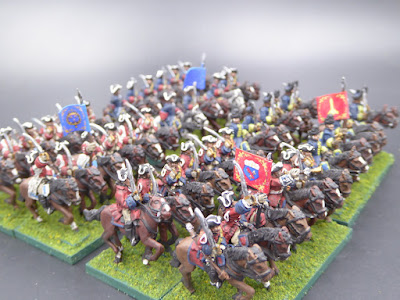 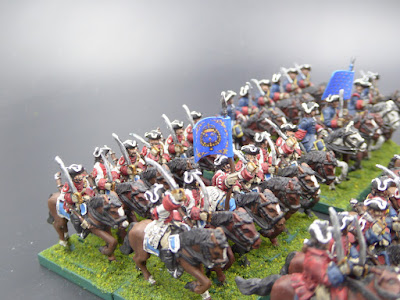 David's artistry in his flag work is still on display even in these small cavalry flags.  The banners provide a splash of color to the cavalry unit and help identify the command stand at a glance.

Brilliant work, David, and thank you!  Now, I need to go off and make a new Wish List for Eureka Miniatures and include more cavalry standard bearers among the unit orders.

Posted by Jonathan Freitag at 7:51 PM