There Was Such Great Promise 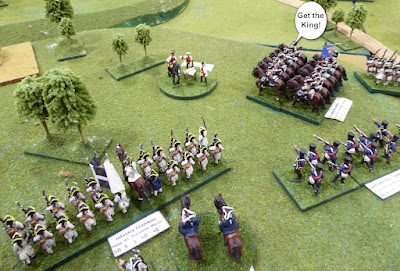 On Sunday, Matt (wargamesinthedungeon) and I met on the remote fields of Bassignana to witness the third playing of the battle.  For those following earlier accounts, the ground should be well traveled.  For those new to the battle, below is a photo of the battlefield showing initial troop dispositions and place names.

Matt took command of the combined Franco-Spanish armies while I headed up the defending Piedmontese/Austrian armies.  Rather than umpiring, I actually took up a command in Sunday's contest.  With two games in the books and the decision split, which way would the battle turn in Game #3?
With King Emanuele dead on the field and de la Chiesa's brigade destroyed, even the timely arrival of Austrian cavalry cannot stabilize the situation.  The Franco-Spanish army has won the day!  Congratulations to Matt for a well deserved victory.  Before battle began, the position of the King’s army held much promise.  While the fighting may have extended another turn or two, left with mainly cavalry, the Piedmontese/Austrian armies could not have recovered and held lost ground.
As in the historical battle, the Piedmontese army was split and overwhelmed before Austrian reinforcements could intervene.  Casualties were surprisingly evenly distributed with each side losing about a half-dozen units in the action.  The Piedmontese army would withdraw back across the Po River as they did historically.  This time, without their King!
Game length clocked in at about 2.5 hours and six turns played.
Still, great fun and another interesting outing at Bassignana!
Posted by Jonathan Freitag at 12:00 AM