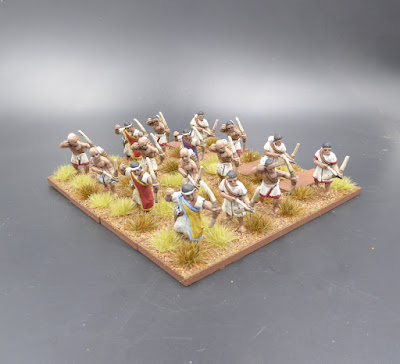 The theme of today's post is about filling in holes.

First up, Hittites; Hittite bowmen, skirmishers to be exact.

With Ian intent on reigniting work on his Late Bronze Age rules, I offered up my troops and table for remote playtesting.  One problem I faced is that Ian's rules require a number of skirmisher units wielding either bow, javelin, or melee weapon.  Having patterned my Hittite Army primarily from Impetvs (or TtS!) lists, I did not field many skirmishers.  To correct for this under-representation, I pressed several units into the painting queue. 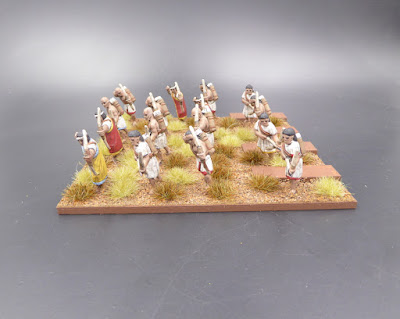 To that goal, first off the workbench are four, four-figure stands of Hittite bowmen.  Figures are 28mm Newline Designs.  A similar number of javelinmen will likely be next in this project augmentation.

The second hole to plug is a shortage of four-inch flocked hexes.

With the recent battery of AWI games on hexes, thoughts of larger hex-based games have been turning over in my head.  Larger games require more hexes.  To address this shortfall, I finished 40 more four-inch, flocked hexes.  These hexes ought to be sufficient to increase the hex grid by two rows in both axes.
The third hole I am entertaining thoughts of filling is replacing a roster system of tracking casualties and unit attributes with an on-table marker approach.  Not really a hole but a redirection.  With Richard's WotR rules in playtest, he uses a roster system to track casualties, morale, armor, and other attributes.
The rostering system works well especially when the GM handles all of the tracking and computations.  For my own use, I prefer keeping my focus on the gaming table to reduce paper shuffling and back-and-forth glances from table to roster.  Still early versioning but I think I may have a workable prototype solution for my own needs.  The attribute labels on the right-hand side of each melee line could be decreased in size.  Richard is willing to give this system a try. We will see if this scheme works in practice.  Hopefully a test in the near future is possible.
The final hole to fill is a gaping hole in the basement ensuite bedroom. 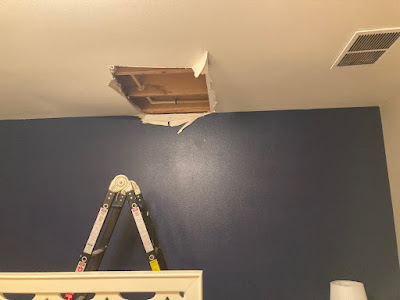 Yes, quite an unpleasant discovery on Monday afternoon.  Last used by house guests at the end of July, Nancy went into the room and came out stating that "we have a big problem."  Well, often times, the "big problem" is not that big but this time, indeed, it was.  When I went in to inspect, the ceiling was bulging down, heavy with water.  The bed underneath the ceiling was damp but not soaked.  Pushing the bed into the center of the room and cutting away a section of the damage in search of the source of the leak revealed the culprit; an adhesive failure at an elbow joint.  Calls to a plumber and insurance got the leak fixed and damage mitigation pushed into motion on Tuesday.  This reconstruction work will likely disrupt gaming activities for awhile.  With another house guest planned for end of month, a lot of luck is needed to see the suite serviceable in time.
Given the maintenance issue described above, yesterday marked only the second Tuesday remote game with my UK friends missed since I began gaming with them last November.  Too bad too as I was scheduled to take to the air in a new Fokker triplane.  Maybe next time?
Posted by Jonathan Freitag at 12:00 AM