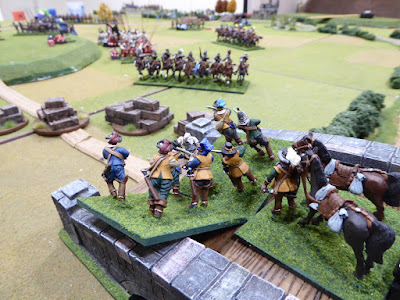 The background for Cropredy Bridge was presented in the previous post (see: On The Table Today Is).  Now, time to present the action, itself.

Four players took up the challenge in a remote game with Chris and Richard taking command of the Parliamentarian Army while Steve and Tony took command of the Royalist Army.  While Richard had played the rules, A Reign Cut Short, one time, perhaps a year ago, the others received their baptism of fire.  The rules are my own work with original inspiration coming from Howard Whitehouse's Ironsides.

Without further ado, on to battle!
(Arrows: White=move; Yellow=retreat; Red=melee).Yes, the battle is over.  The Parliamentarians win a major victory as Wilmot's rear column is effectively destroyed.
What began with great promise for the Royalists in their early cavalry attacks upon Middleton quickly unraveled when Northampton was caught in a pincer by Waller and Vandruske.  With no artillery on the field, the Royalists found themselves at a disadvantage although Parliamentarian artillery was generally ineffective but sometimes a nuisance.
Congratulations to Richard and Chris for their superb handling of the Parliamentarian Army.  Rather than strike with Middleton directly toward Hays Bridge (as historically), Chris chose to engage the enemy cavalry first.  Richard's dismantling of Northampton will be one for the record books.
Thanks to Steve and Tony for offering up a solid defense while providing an entertaining game.  With one game under their belts, no guarantee that this result could be repeated.  For me, great fun in bringing together distant gamers for an enjoyable session.  I look forward to the next time.
Posted by Jonathan Freitag at 5:21 AM