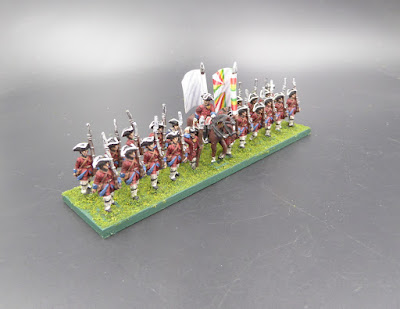 Work continues on the SYW project in 18mm.  Actually, work at the painting desk sees a number of different projects getting a run-out.

First up is a 23-figure regiment of Swiss Regiment Salis to add to my growing French Army.  Foot figures are Blue Moon led by a Eureka mounted colonel.  Flags are by David at Not by Appointment. 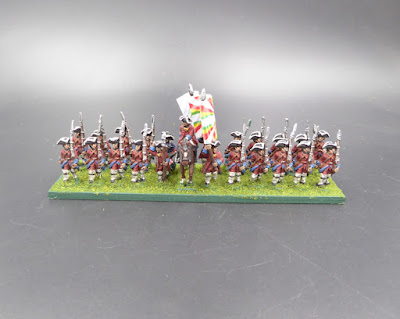 Looking over at the queue to the photo booth, Salis is the last in a long line of French troops for this project (for now, anyway).  Next up for the SYW project is a turn to fielding Spanish infantry for the WAS but I am getting ahead of myself.

Two more odds and ends moved across the painting desk of late.  Both entries are for the 30mm ECW collection.

Mustering out is another command stand using The Assault Group figures.  This command stand features Wallenstein from the 30YW range but he will be pressed into service for ECW battles wherever needed. 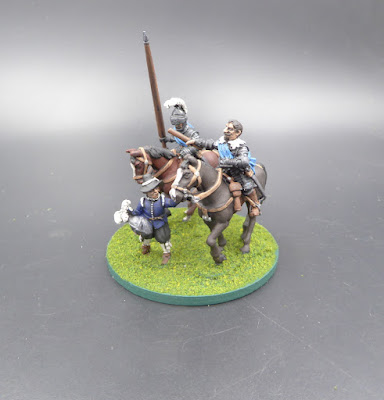 Next, are three stragglers from the recently completed commanded shot unit.  When I originally painted the commanded shot, 26 figures were painted.  When I put the figures into the painting queue, I was almost certain there were 27 figures.  27 figures went in and only 26 figures came out.  Since the figures are based in threes, I only fielded 8 stands of three.  The other two figures were set aside.  Fortunately, during a quick clean-up, the missing figure was found underneath a box of figures on the floor.  He was quickly primered, painted, and now joins his comrades. 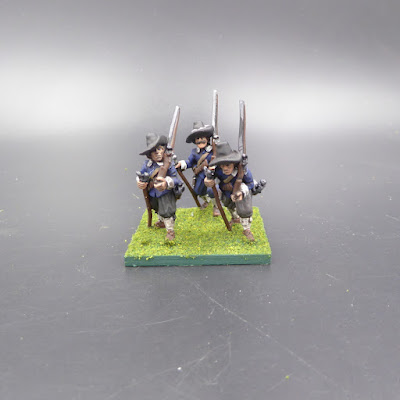 Finally, Matt and I return to our long-running AWI with a continuation of the campaign on Sunday.

Matt never holds back on his table layouts.  Sunday's action at Bound Brook is no exception.  Just look at the marvelous layout I get to fight over tomorrow.

Posted by Jonathan Freitag at 4:51 PM