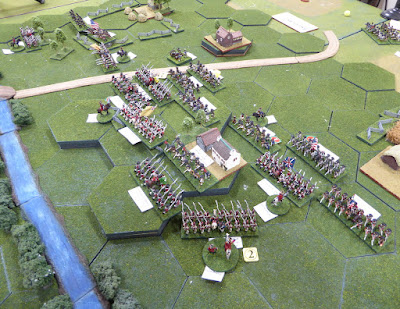 The action at Shoemaker's Bridge is up for one last replay.  This time the Monday Night UK Group (which plays on Tuesday!) is set for an encore game.  Rather than umpiring three players in the first game (see: Shoemaker's Bridge: Game 1), I had seven players participate in this game.  Quite a fistful of players for a remote game.  No worries since there were seven brigades on the OB.  Each player could command a meaningful and independent brigade.  Still, managing and coordinating seven players in a remote game is a challenge.

How did the battle unfold?  Please continue reading to find out! 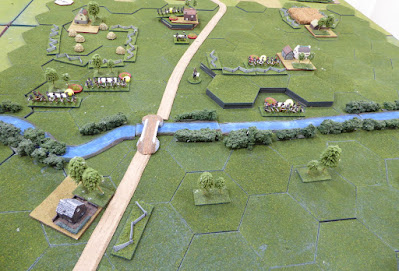 General Heard deploys his brigade and the independent units of Rifles and artillery as seen above.  The artillery is deployed in the rear covering the bridge.  The rifles and one militia regiment set up on the American right, likewise, covering the bridge while the two remaining militia regiments position themselves on and around Shoemaker's Hill.  All are given Hold orders enabling them to react to British movements on Turn 1. 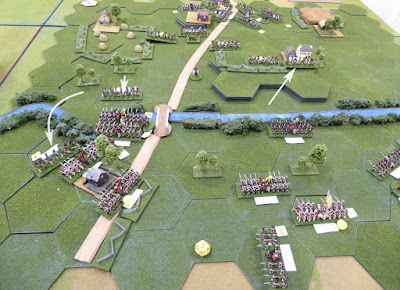 React the Americans do.  As the British begin reaching the battlefield on their approach to the bridge,  Heard snaps into action.  The Rifles quickly cross the stream and let loose a volley into the arriving Redcoats.  Militia situated at the bottom of the hill along the stream climb back onto the heights before contact with the enemy. 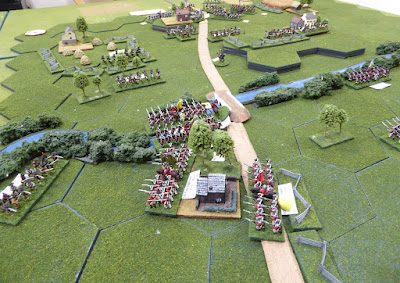 The riflemen are driven off with casualties but their bold move forces the Redcoats to bunch up around the bridge. This concentration of force makes an easy target for both militia and guns. One of Jones' regiments scatters in these opening salvos.  Brushing aside these Rebels may not be so easy as expected. 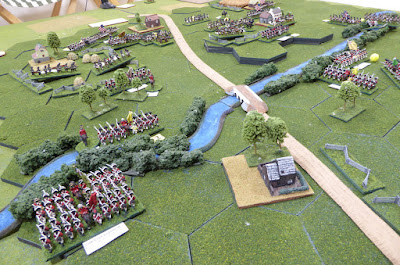 Or will it?  The Redcoats wade across the stream all along the front with one regiment scaling the heights to contest Shoemaker's Farm almost immediately.  Lord Percy, Matthews, and the two guard regiments swing wide around the Rebel left in an attempt to pressure Shoemaker's Farm from two directions.  American reinforcements can be seen hurrying toward the front. Will they reach the front in time? 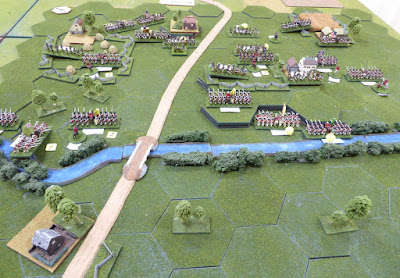 The answer to that question is unknown.  The Redcoats, having crossed the stream in strength, are driving the Rebels back on the American right.  Pigott's men advance and fight into the fields deep into the American right.  Percy and Matthews drive deep on the Rebel left.  Smith's Brigade is preparing to assault the heights.  This rapid advance is beginning to show shades of battles' past. 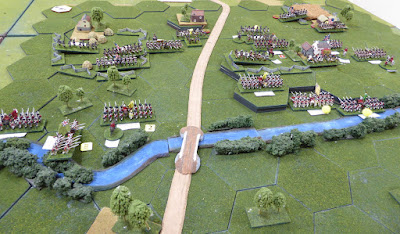 But the American defense shows signs of stiffening as reinforcements spin off to the left and right to contest these British probes. On the Rebel right, Jones and Pigott's commands are driven back from the fields as Heard and elements of Nixon's Brigade pushes forward.  The British suffer heavy casualties as they are thrown out of the field.  On the American left, skirmishes erupt as Parsons’ Brigade interrupts Percy and Matthew's thrust. 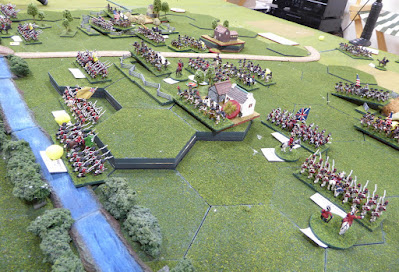 In the center, Smith prepares to assault the heights in force having gained a foothold on the lower slopes near the bridge.  The American defense appears to be stiffening. 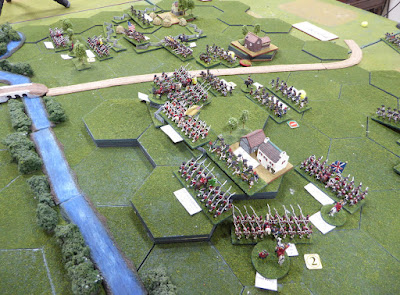 Smith's assault goes in as his command climbs the heights.  The Rebels are driven back swiftly but casualties are high.  Matthews throws in one of the Guard regiments in the assault upon Shoemaker's Farm.  For now, the militia in the farm hold but for how long? 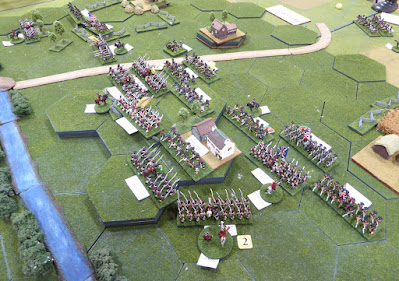 The Rebels counterattack!  On the left, Jones' Brigade suffers greatly as his command takes withering casualties as the Rebels press forward.  In the center, Nixon goes on the attack in hopes of stopping the British advance.  Parsons, on the Rebel left, forms up to contest Percy's planned encirclement of the heights. 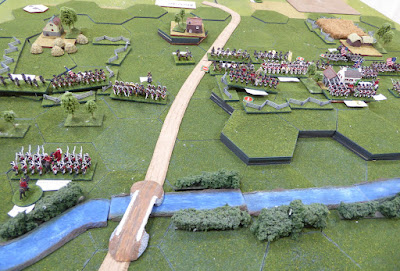 Smith storms Shoemaker's Farm and the militia are ejected.  Both suffer great loss.  Lead elements of Smith's command descend the heights flushed with success.  Can the Americans hold? 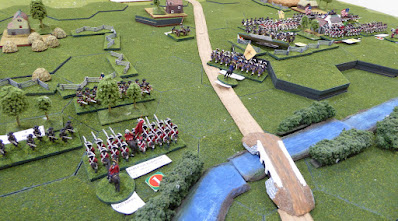 While Parsons holds the Guards at bay on the left and Heard dispatches the remaining Redcoats on the American right, Nixon turns the tide in the fight for the heights.  With the situation at the bridge under control, Nixon can turn his attention elsewhere.  In their possibly over-extended positions on the hill, the Redcoats are flanked by elements of Nixon's Brigade. 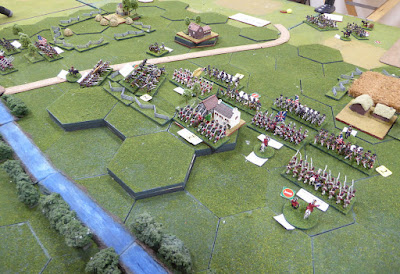 Softened by artillery and then assaulted from the rear, the Redcoats waver and then break.  In a matter of minutes, Smith's command is in tatters.  Smith must now figure a way out of this vise.  With Parsons pinning the Guard, no relief is in reach.  While Smith still holds the farm, his remaining brigade is either dead on the field or trapped. 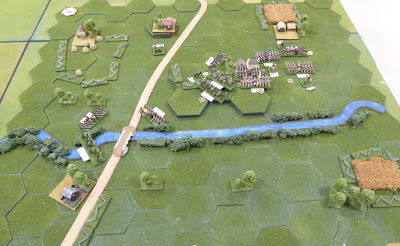 With the British left destroyed and only remnants of Smith's Brigade clinging to the Shoemaker Farm, Lord Percy orders the Guard to retire from the field.  The Rebels have held the field and prevented the encirclement of their army outside of Brooklyn.  Hurrah!
Well!  Finally, the Americans taste victory in the fifth replay of this battle.  This was a hard-fought scrap that the Rebels could have lost once again.  A well-played game by the Rebel commanders.  This American victory with provide another interesting piece of evidence to a battle retrospective.
How about the Butcher's Bill and Victory Point totals?
Battle Losses: British lost 8 regiments of infantry and three generals (!) to the American's loss of 7 regiments of infantry and one general.
Victory Points: British 20. Americans 34.
I declare this a decisive tactical American victory.  The Rebels have blunted the planned British flanking maneuver upon Brooklyn.

Ian, Graham, and Phil, you demonstrated how to win an American victory in this scenario and save Fort Brooklyn.  Decisively too!  Well done!
For the British players of Will, Steve, Chris, and Richard, you fought valiantly and I thought I would witness another in a long string of British victories.  Alas, the Rebels live to fight on.
For a player's perspective of the battle, see Graham's account at,
A WI Shoe-in.
Great fun in umpiring this very large, player count remote game.  Thanks to all!
Posted by Jonathan Freitag at 8:54 AM